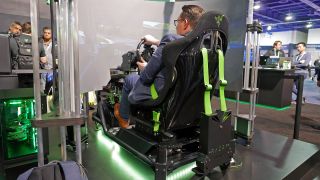 LAS VEGAS — At home, I have a Logitech G29 wheel attached to a Trak Racer DS3 wheel stand. I use this setup primarily to play Gran Turismo Sport and Dirt Rally 2.0. It's nothing fancy, but it's a good, relatively inexpensive combo for someone who loves to play racing games, but who doesn't get too serious about the hobby.

However, this week I visited Razer's CES 2020 booth and went for a drive in their untitled driving simulator. It's going to be really hard for me to go back to my humble Brooklyn apartment-friendly rig now.

Razer's driving simulator was developed by the gaming hardware firm in cooperation with professional simulator experts Vesaro, as well as Simpit Technologies, which handled the display projection side of the affair. It comprises a direct-drive Fanatec force-feedback wheel; a 202-degree, 128-inch projection surface that wraps around the driver with two projectors; a hydraulic triple-pedal system; a three-point harness with a built-in tensioner that reacts in real time to G-forces acting on the car; and, of course, a motion platform that pitches you every which way, ensuring you feel every gear shift in your spine.

For the demonstration at Razer's booth, this rig was running Project Cars Pro, which should give you an idea of how serious the company is about garnering interest from professional sim racers and the esports community. When I strapped myself in, I was thrust into a four-lap skirmish around England's legendary Brands Hatch circuit, piloting a Porsche 911 GT3 RS to take on three classic 917 prototypes and a road-going Aston Martin Vantage — just for good measure.

It was a gut punch from the very start. Although Brands Hatch is a notoriously challenging circuit, I can understand why Razer chose it. The track is seated in a natural bowl, with lots of elevation changes over the course of its 1.5-minute laps. The first corner, Paddock Hill Bend, is essentially a high-speed, blind-crested freefall that compresses you upon exiting, then has you speed toward the tightest turns on the track. You need to drop down to second gear to negotiate this hairpin turn with any kind of momentum.

This section of the circuit shows you the best features of Razer's driving simulator within 10 seconds. Feeling the left side of the rig rumble as I kissed the curves at the bottom of Paddock Hill, and then having the belts tighten all around me as I broke hard into Druids felt as visceral as virtual racing can get. Making a massive mistake in the middle of Surtees — a corner never have, and likely will never, be able to figure out — shot me off into the kitty litter, bouncing around as I skipped and scraped to a pounding shunt, and a reunion with a familiar tire barrier.

I have only two gripes about Razer's machine. First, the rig's projection display system really wasn't up to the task. Perhaps it was the nature of the lighting inside the Las Vegas Convention Center's South Hall, but the picture was extremely washed out, making it very difficult to see the road ahead at times. I liked the wraparound "screen" idea, but the visuals were far too dull.

Second, I was surprised at the lack of tactile road feel through the Fanatec wheel. I'm not talking about force feedback; that part was excellent, coming from a direct drive wheel. Rather, the smoothness of the steering seemed at odds with the intense physicality of the motion system, belts and so on. Razer clearly wants players to feel the forces acting on a driver's body, but that same level of detail didn't go into the wheel, which could have used haptics to make you feel more connected to the asphalt. Then again, it's also quite possible the company purposely set the steering to be more comfortable for CES attendees, who probably aren't looking to have their wrists broken at a tech convention.

Vesaro reps told me the chassis, seat and motion platform themselves cost around £2,500, but that doesn't include the wheel, pedals, projectors, a PC or a copy of your racing sim of choice. Factor in all those necessary pieces of the puzzle, and the cost of Razer's rig can balloon very quickly to £13,000 pounds or more. (I checked this against the professional rigs on Vesaro's website. And you really should give the Vesaro store a look; the company's priciest configuration costs an eye-watering £54,000.)

Taking the price into account, it's not surprising that Razer seems unsure how to market its driving simulator, or if the company will choose to do so at all. There's interest in exploring racing esports, as Sony's Gran Turismo FIA World Championships demonstrates, and Razer will consider selling a rig directly to consumers — although that's definitely not a guarantee at this stage.

Personally, while I know I'll never, ever be able to afford one myself, I want Razer to move forward with this concept. At CES, the rig put too many smiles on people's faces to be consigned to a show floor forever. Besides, the best I could manage was to shave three seconds off the day's best time, and I want another go, damn it.

Be sure to check out our CES 2020 hub for all the news and our hands-on impressions out of Las Vegas.