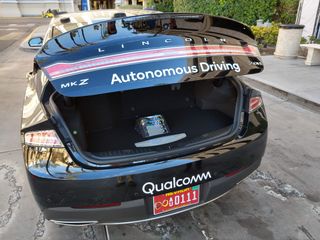 LAS VEGAS – Another CES, another advancement in autonomous car technology. This year, chip developer Qualcomm showed off its new Snapdragon Ride platform. The Qualcomm Snapdragon Ride is a car-based computer system that can outfit a vehicle with anything between Level 1 (parking assistance) and Level 5 (no human driver whatsoever) autonomy. At present, Qualcomm is working with almost every major auto manufacturer to bring these systems into consumer cars within the next few years.

To learn how Snapdragon Ride works, I met with Qualcomm at CES 2020. The company briefed me on the technology, then gave me a firsthand demo of how the system might work in practice. We piled into a Qualcomm-modified Lincoln MKZ sedan, then took a 20-minute trip on the highway where the car itself did all the driving. From entry, to merging, to lane changes, to speed adjustments, to exiting again, the Snapdragon Ride proved itself to be a capable highway driver.

In order to help me understood how Snapdragon Ride works, Qualcomm walked me through its components, step by step. The system requires dozens of data inputs, which makes sense when you consider just how many variables are out there on a crowded highway. The Snapdragon Ride gathers information from Global Navigation Satellite System (GNSS), Inertial Measurement Unit (IMU), Controller Area Network (CAN) and similar systems.

Then, the system combines these numbers with data gathered directly from the car. Our MKZ had eight cameras and six radars at key locations: the hood, the trunk, the side-view mirrors, the roof and so forth. The Snapdragon Ride downloads an HD map of your route, then uses the data gathered to plan out the car’s trajectory, latitude/longitude locations, steering, braking, throttling and so forth. Using the Snapdragon Ride’s powerful processor, the system can predict what other cars on the road will do in the near future by mapping out probable trajectories for every vehicle within camera range.

It’s a complicated, data-intensive process, but in theory, the Snapdragon Ride takes into account all the same variables as a human driver. The only thing it’s missing is a human sense of intuition, which I soon learned firsthand.

While the Snapdragon Ride could theoretically support urban autonomous driving, that wasn’t part of the company’s CES demo. Instead, we had a human driver for the first leg of our journey, which took us from the Delano hotel to the entrance ramp of the I-15 South highway. Once we got there, he handed control over to the Snapdragon Ride: a complex structure of circuits and ports located in the trunk.

The ride started with a merge, in which the Snapdragon Ride had to observe other cars in the surrounding lanes and determine its own place in the roster. Left to its own devices, the Snapdragon Ride will accelerate to the maximum speed limit in an area, then stay there for as long as possible. As such, my ride started with a burst of aggressive acceleration. It wasn’t smooth, but it did get us well ahead of other cars on the entry ramp, providing an opportunity to merge safely.

Qualcomm didn’t allow press to take photos inside the car, but I can describe what I saw. There was a tablet mounted to the central console, where we could see what the car’s cameras saw. As other cars passed us, the camera placed a green box around them. This way, it could keep track of each car’s speed and trajectory. Lane boundaries showed up as white lines. Another display showed the car’s location on the road, with cars in front of it marked in purple, to help determine a safe top speed.

Our journey started on the I-15, and the Snapdragon Ride took us a few miles down the road until we got to the I-215 West entrance. During this time, it switched lanes, automatically using the blinker each time. The driver had to manually approve each lane change, although Qualcomm explained that this was part of its own company’s safety protocols. Other auto manufacturers could simply let a car change lanes whenever the Snapdragon Ride deems it safe to do so.

I won’t describe every single leg of our trip, but the car generally did everything right. (As you can probably tell, since I’m still here to write this piece.) It merged onto the I-215, handed controls back over to the driver when we got onto an exit ramp, then took over once again when we merged onto the I-215 East. The car accelerated (forcefully) on each new highway, braked when we went around curves and merged each time we had to get out of an exit lane. The Snapdragon Ride can also change lanes if a car directly in front of you is moving too slowly, but we didn’t encounter this in the middle of a weekday in light Las Vegas traffic.

While part of me is impressed that the Snapdragon Ride took me on two highways safely, another part of me couldn’t help but notice that the experience was still not as smooth as having a competent human driver behind the wheel. The car always accelerated much faster and more aggressively than most humans would, and braking was likewise sometimes abrupt.

The bigger issue, though, was that the Snapdragon Ride didn’t change lanes at the proper time. Because the system (smartly) errs on the side of caution, it requires a lot of lead time to recommend a lane change. As such, the car once spent a good two or three minutes waiting to merge to the left. But then, as soon as it got into the left lane, it immediately needed to merge right again in order to get onto an exit ramp. The Snapdragon does not “understand” why it’s advantageous to be in any given lane; it just “knows” it’s supposed to be in the middle lane for most of the ride, then the right lane to exit. It’s an inefficient and potentially unsafe way of driving.

As such, I wonder how this system might function in bumper-to-bumper traffic (which can absolutely on a highway, particularly near major urban areas). In situations like this, you often have to make your own openings, and negotiate with other drivers in wordless, split-second merges and concessions. I feel that in a situation like that, the Snapdragon Ride might simply be trapped in the wrong lane for a long, long time, unwilling to make an “unsafe” maneuver.

On the other hand, there’s no reason why the Snapdragon Ride has to control a car’s every move, 100% of the time, as my ride demonstrated. The system could implement something as simple as cruise control, or as complicated as a full driverless experience, so it’s really up to auto manufacturers to decide.

Qualcomm will make this technology available to automakers in the first half of 2020. As such, consumer cars with the technology integrated could come out as early as 2023. Which companies will make use of the technology, and in what capacity, remains to be seen, but GM is one of Qualcomm’s big partners, so something from that manufacturer is certainly possible.