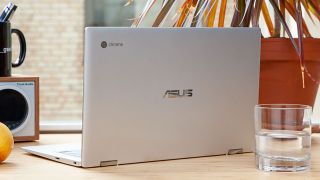 Chromebooks are among the best laptops you can buy for work or school. These Chrome OS-powered laptops are perfect for students and business pros alike. We went hands-on with the $999 Samsung Galaxy Chromebook at CES 2020 and it's the thinnest, most powerful Chromebook ever.

However, if you're on a budget and want the best value on a new machine, you're on the prowl for only the best laptop deals. From premium Chromebooks, 2-in-1 Chromebook to cheap Chromebook systems for elementary school, here are the best Chromebook deals available right now.

Chromebook deal of the week

Lenovo 100e Chromebook: was $219 now $119 @ Walmart
This cheap Chromebook is now $119. It's ideally for students who just need a machine that handles the basics, and it's rated for 10 hours of battery life. Amazon offers the same price. View Deal

What is the difference between a Chromebook and a laptop?

Rather than storing documents and photos directly onto the Chromebook's local storage drive, you can store them in the cloud. As a result of the Chromebook's simple OS, the specs are less complex than Window-based machines.

While Chromebooks aren't ideal for tackling heavy graphics tasks, they'll get you through day to day computing.

Samsung Chromebook 3: was $299.99 now $135 @ Amazon
There are several versions of the Samsung Chromebook 3, but this model is one of the fastest. If you want to have many tabs open, or run Android games, you'll want to carry this laptop's Celeron N3060 CPU, with its 4GB of RAM. It weighs only 2.5 pounds. View Deal

Lenovo Chromebook S330: Was $299 now $169 @ Walmart
This budget Chromebook is best for those looking for casual computing needs — Google Doc editing, web browsing and YouTube binges — on its 14-inch display. With up to 10 hours of battery life, the S330 is reliable in a way that its $169 price might not suggest.View Deal

Dell Chromebook 11 3100: was $355 now $239 @ Dell
This durable Chromebook can take whatever your kids can dish out, including drops and spills. And the specs are solid for the price, including a Celeron CPU, 4GB of RAM and 11.6-inch HD display.View Deal

Google Pixel Slate (Core m3): was $799 now $444 @ Amazon
The Pixel Slate has an elegant design, sharp screen, and a comfortable keyboard (sold separately). It also lasts 10 hours on a charge. It's now at its cheapest price ever.View Deal

Google Pixelbook: was $999 now $889 @ Amazon
We loved the sleek design, brilliant display and speedy performance of this Pixelbook model. Though its price tag is steep compared to other Chromebooks, this deal knocks $125 off. View Deal