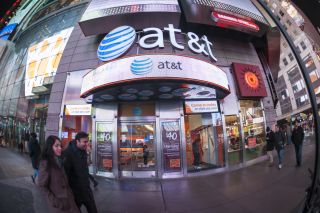 AT&T is shuffling up its unlimited data plans, dropping free streaming services from all but its most expensive tier, but also lowering its entry price for unlimited data.

The new plans go into effect this Sunday (Nov. 3), when AT&T introduces its new AT&T Unlimited Starter Plan for $65 a month and AT&T Unlimited Extra for $75 a month. A third tier, AT&T Unlimited Elite, will follow in "the coming weeks," AT&T said, and it will cost $85 a month.

The new plans are cheaper than AT&T's current unlimited offerings. AT&T Unlimited & More cost you $70 a month, while Unlimited & More Premium, which featured additional perks, cost $80 a month for a single line. However, both those plans included a Live TV perk that included 35-plus channels of live and on-demand programming. That's being dropped from the new AT&T unlimited data options, and only the pricey AT&T Unlimited Elite plan will have access to HBO.

Here's a closer look at AT&T's new data plans and what you get for your money, whether you're looking for just a single line of data or a cell phone plan for families.

What you Get: In addition to unlimited talk, text and data, you also get to use your plan when traveling in Canada and Mexico. Video will stream at SD resolution, and there's no mobile hotspot data.

Will You Get Throttled: AT&T reserves the right to slow down data speeds for Unlimited Starter subscribers. That means your speeds could be throttled if AT&T's network gets congested.

What you Get: As with the Unlimited Starter plan, you can use your talk, text and data in Canada and Mexico. The Unlimited Extra plan includes 15GB of LTE hotspot data. Again, you're steaming video at SD resolution.

Will You Get Throttled: If you use more than 50GB of data in a month, AT&T says it could slow your speeds for the rest of the billing period. That's actually an improvement from the old Unlimited & More plan, which had a 22GB cap.

What you Get: This is the plan to get if you want high-resolution video don't mind paying up for it. Unlimited Elite subscribers can stream in HD, and AT&T will include access to HBO. (Previously, Unlimited & More Premium subscribers could pick between HBO and other premium streaming services, but that perk's ended.) You also get 30GB of LTE hotspot data and the ability to use your plan when traveling in Canada and Mexico.

Will You Get Throttled: AT&T won't slow your speeds unless you use more than 100GB of data in a month.

How AT&T's new plans compare to other carriers

At $65, the new Unlimited Starter Plan from AT&T is cheaper than $70-a-month plans from T-Mobile and Sprint. But those two unlimited data options — T-Mobile's Magenta plan and Sprint's Unlimited Plus — offer better perks. T-Mobile offers 3GB of hotspot data, lets you use your data in 210-plus countries (though at slower speeds) and throws in a Netflix subscription if you've got two or more lines. Sprint's Unlimited Plus lets you stream video in HD and you get 50GB of hotspot data. Both T-Mobile and Sprint also offer stripped-down unlimited plans that are cheaper than AT&T's Unlimited Starter option.

A better comparison might be to Verizon's unlimited plans, which are now split into four tiers. Verizon's $70 Start Unlimited is $5 more expensive each month than AT&T's starter plan, and like AT&T, Verizon can slow your speeds if its network gets congested. Verizon's Play More and Do More options also cost $5 more each month than AT&T's Unlimited Extra Plan, but the perks are better for Play More, which includes HD video streaming plus an Apple Music subscription. Verizon's $90 Get More offering is the most expensive unlimited data plan from any carrier, and it offers the same hotspot data as AT&T's Unlimited Elite option while featuring a lower cap (75GB) before data speeds can be slowed.