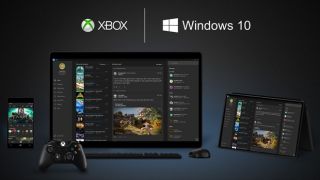 Since the original Xbox was launched in 2001, Microsoft has had two platforms for playing games, and they've never really been able to communicate well with each other. Now Microsoft hopes to bring the PC and the Xbox together with an Xbox application for Windows, simply called Xbox App, and with several new features that look to make gaming better than ever on Windows.

Microsoft is bringing many features Xbox gamers love to the desktop with the Xbox App. The My Games section will catalog all your games across every device you own that runs Microsoft software while also serving as your social hub. It features a friends list, complete with gamer tag integration, and an activity feed for checking out what they’ve been up to recently.

More: Windows 10 Will Be Free Upgrade for One Year

Just hit Windows + G. This will bring up the recording menu, which lets you start recording or grab a clip of the last 30 seconds of gameplay, even for games released before Windows 10 or launched from a third-party store such as Steam. You can then edit it directly in Windows, or share it on Xbox Live or another social network.

A new version of Microsoft's programming interface will let games show greater detail with higher frame rates, even on existing hardware. Microsoft says that for CPU-bound games, Direct X 12 will increase performance by up to 50 percent versus Direct X 11. Microsoft claims this is possible by giving developers fine control over both the processor and graphics cards.

Aside from increased performance, Direct X 12 also offers improved battery life for mobile devices. Microsoft says the same scene will use half the power running on Direct X 12 compared to Direct X 11.

On Windows 10, you can play with or against other players, regardless of whether you're on a PC or an Xbox. At its preview event in Seattle today (Jan. 21), Microsoft showed off a co-op session of Fable Legends in which Microsoft Games head Phil Spencer on a desktop joined a Lionhead developer in-game by clicking on her gamer tag from the friends list. It looked pretty seamless, but it will really be up to game developers to support.

With streaming from your Xbox One to a Window 10 PC or tablet, you can now play Xbox One exclusives from any room in your house. You can even start playing on one device, pause, and then seamlessly resume playing from a completely separate device.

With Windows 10, Microsoft hopes to not only improve existing games through the use of Direct X 12, but give you more options to play them any way you like.