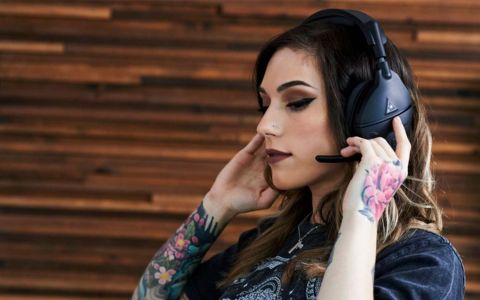 The Turtle Beach Elite Atlas is one of my favorite $100 gaming headsets, combining a super-comfortable design with fantastic sound and widespread compatibility. But the Elite isn't the only headset in the Atlas lineup; there's also the $80 Turtle Beach Atlas Three. And while you can save a cool $20 if you pick up the Atlas Three, I wouldn't recommend it.

The Atlas Three isn't that comfortable; getting it up and running can be a pain, and to top it all off, the sound quality isn't that great. While the Atlas Three is hardly irredeemable, it's not nearly as good as some of Turtle Beach's other products — or some competitors in the same price range. Maybe pick this one up if you can find a good sale, but otherwise, you're better off saving up for the Elite Atlas.

If you're familiar with Turtle Beach's older, cheaper headsets, the Atlas Three will look familiar. This peripheral sports a plain black, plastic chassis, with some gray foam padding on the ear cups and the headband. On the left ear cup, you'll find a volume control, a chat-mix control, a boom mic and two buttons: one for power, one for equalization modes.

At first, I wondered what the power button was for. After all, the Atlas Three is a wired, 3.5mm headset; it shouldn't need an independent power supply. I assumed, incorrectly, that the powered mode was necessary for the equalization settings, but the headset would still work in an unpowered mode. This is a relatively common feature in music headsets, and while it can be a little obnoxious, it's hardly a deal breaker.

But the Atlas Three doesn't have an optional powered mode. If you don't power the headset up, you won't hear a thing. And if you don't listen to anything, the headset will automatically shut itself off after 5 minutes or so. This constant powering and repowering got old almost instantly. Even though the headset's battery lasts a long time (up to 40 hours, according to Turtle Beach, although there is no easy way to test this), this repowering is still a huge inconvenience in a wired headset.

At least the Atlas Three works with just about any system, thanks to its 3.5mm jack design. You can hook it up to a console, laptop or mobile phone with a single wire, or to a PC with an (included) audio/mic splitter cable.

Like a lot of older Turtle Beach headsets, the Atlas Three feels pretty tight, regardless of how you position it. You can adjust the position with some very, very rigid notches on either side of the headband, but in my experience, it's hard to get a good fit. Once you overcome the initial friction, which is considerable, the steel rod will slide way up or down, overshooting your destination by a wide margin. And no matter how far the rods extend, the headset will always press down on your temples pretty tightly.

I handed off the Atlas Three to a co-worker, who shared my assessment. He said the headphones felt pretty tight but weren't technically uncomfortable to wear — at least for an hour or two at a time. Neither of us was dying to throw the headset off after a long gaming session, but we also agreed that Turtle Beach has made much, much more comfortable peripherals in recent memory.

The Atlas Three performs pretty well in game. I tested it with a variety of PC games and found that the sound scape, while somewhat treble-heavy, gets the job done across a variety of genres. I could hear where my foes were coming from in Overwatch; I enjoyed the orchestral soundtrack of Age of Empires: Definitive Edition. World of Warcraft and Baldur's Gate: Siege of Dragonspear sounded just fine, from dialogue snippets to swords-and-sorcery sound effects.

I was a little less impressed with the console performance. Getting the right volume while playing Final Fantasy VII on the Switch wasn't that easy, and when I accomplished it, nothing in the game sounded very rich. The Atlas Three can handle just about any game you throw at it, on any platform, and that's to the headset's credit. But my ears never perked up at an unusually nuanced or vibrant sound, and yours may not either.

Placing volume and chat-mix dials directly on the left ear cup is a great idea; putting them one right on top of the other, and making them feel indistinguishable, is less great. I very often adjusted the chat mix when I wanted to control the overall volume, and vice versa.

There's also the boom mic, which sounds fine — provided you're in a quiet area. The mic recorded my voice fairly clearly, without too much fuzz or distortion. But it also recorded the voices of my co-workers speaking at normal volumes a few desks away. Since there's no way to adjust the mic's sensitivity, this may not be a great solution in a noisy home.

However, the Atlas Three's biggest feature comes in its equalization modes, since in theory, these should justify needing to power the headset constantly. There's a default sound scape, a treble boost and a voice boost — and in my tests, all three sounded nearly identical. It's yet another reason to feel frustrated with needing to charge a wired headset.

The Atlas Three gets one part of listening to music right: the immediacy. All of the tunes I listened to sounded close to my ears, rather than distant or hollow, like what you get from a lot of inexpensive gaming headsets. Otherwise, though, music on this headset is a pretty mediocre experience. There's not enough bass, and vocals can sound muddy.

I listened to tracks from Old Crow Medicine Show, Flogging Molly, The Rolling Stones and G.F. Handel, and I shrugged my shoulders through all of them. Every song was heavy on the treble, and since the only music-friendly equalization mode is Treble Boost, that didn't help much. The experience is not bad, per se, just underwhelming all around.

While the Atlas Three isn't a terrible headset, it doesn't get anything fantastically right, either. The sound quality and comfort are just OK, and everything else about this peripheral feels like a hassle. The power button is a huge annoyance, the equalization options don't add much, and the mic picks up way too much background noise.

In the same price range, the SteelSeries Arctis 3 ($80) is a much better investment, but your best bet would be just to drop the extra $20 for the Atlas Elite.