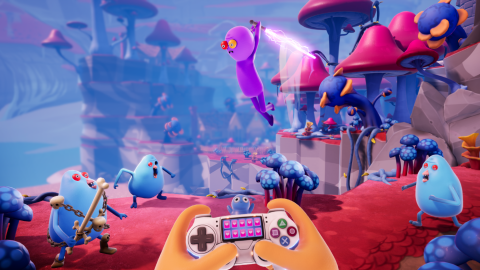 Trover Saves the Universe feels really, really chill, and that alone makes it pleasantly different from most other games out there.

Before I reviewed it, I played Trover Saves the Universe ($30; PS4/PSVR; PC version coming later) about four or five times at various conventions. During one such session, I was lucky enough to talk to Justin Roiland: the game's co-creator, as well as one of the masterminds behind Rick and Morty. I asked him, among other things, why he thought the game's humor would resonate with an audience.

I thought about his response a lot while I played the game: a platformer/puzzle/first-person/third-person hybrid… thing… that defies easy description. The most incredible aspect about Trover Saves the Universe isn't its colorful visuals, or its creative gameplay, or even its often hilarious jokes — it's that the game just feels really, really chill. To another one of Roiland's works, it has "a looser feel to it … an almost improvisational tone." And I can't think of another game that pulls that off.

How much you enjoy Trover Saves the Universe depends almost entirely upon how much you like Roiland's strange, off-the-cuff, stream-of-consciousness humor. The gameplay can get a little repetitive, and the controls always feel a little looser than they should. But if you've ever watched an episode of Rick and Morty and wished you could interact with every weird offhand gag, Roiland and the crew and Squanch Games have made a title just for you.

Gameplay: A Matter of Perspective

Full disclosure: Squanch initially conceived Trover as a full VR game, but later discovered that the novel control scheme worked just as well on a regular flat-screen TV. As VR makes me unbelievably ill, I reviewed the whole game on a regular PS4. I imagine the experience might be more immersive — possibly even more enjoyable — in VR, but I was mostly just grateful that I could play the game, start to finish, without sacrificing my stomach contents in the process.

Whether you play in VR or flat screen, the basic pitch is the same: You play as a "Chairorpian": an easygoing alien who's perpetually bound to a floating chair. As a Chairorpian, your options are limited: You can press buttons, teleport to nearby nodes and pop up to get a better view of your surroundings. A game with only these options at your disposal wouldn't be all that interesting.

That's where your partner, Trover, comes in. Trover is a purple "Eyehole Monster" in possession of a lightsaber and a world-hopping "telepod." Trover takes care of all the traditional third-person gameplay bits, including platforming, combat and exploration. You'll learn a decent array of moves as the game progresses, including hovering, ground-pounding and tossing items around.

The resulting gameplay is an odd mix of first- and third-person gameplay. As the Chairorpian, you'll need to situate yourself to get the best view of your surroundings; as Trover, you'll need to fight off evil Glorkon clones, and solve puzzles of both logic and platforming varieties. It's a neat way to split the difference between stationary problem-solving and mobile exploration, with which a lot of VR-optimized games struggle.

When everything's firing on all cylinders, the gameplay gets the job done just fine. There are a dozen or so different enemy types that you'll fight along the way, and each one requires a slightly different strategy to take it down. The game's last few levels pit you against multiple types at a time, which requires a little tactical thinking. It's not very deep, and it's not always easy to situate Trover exactly where you need him, but it's not overly punishing, either.

Likewise, the platforming and the puzzles are similarly easygoing. You probably won't have to try any jumping section more than half a dozen times, and I can think of only two instances when a puzzle had me stuck for more than a minute or two. In the first case, I hadn't examined my surroundings closely enough; in the second, I had already tried the proper solution, but my attempt to solve it didn't register. The controls, like the overall game, can be very loose and improvisational at times, and all you can really do is go with the flow.

The gameplay in Trover is simple, sometimes bordering on simplistic. But since the game takes only about 5 or 6 hours to wrap up, it doesn't overstay its welcome, either. You can pad the gameplay time by listening to (a LOT) of optional dialogue or by hunting down hidden Power Babies for extra health and whatnot, but Trover doesn't want to be your new obsession for months on end; it wants to entertain you for a while and let you get to the next game. In an age of never-ending "live service" titles that require you to play for dozens of hours, it's a pleasant change of pace.

If you've ever taken an improvisational theater class, you'll know there is a rule called "yes, and?" Essentially, whatever happens onstage, you never contradict your acting partner; instead, you just roll with it, no matter how bizarre the situation gets.

Trover Saves the Universe is essentially a 6-hour-long demonstration of "yes, and?" in action.

The game begins when a huge beaked alien called Glorkon steals your two dogs, and uses them as his new eyes. A few days later, a purple monster called Trover knocks at your door, breathlessly explaining that Glorkon's new peepers could end the universe. Trover's boss — who is just called Boss — sends the two of you on a quest to stop Glorkon.

Along the way, you'll push a cannibal's house over a cliff, move a bunch of boxes into a house with a basketball hoop, seek out an intergalactic dive bar and feed a fat guy until he explodes, Monty-Python-and-the-Meaning-of-Life-style. These aren't random little diversions; these are major plot points. You'll meet characters named Mr. Popup, Doopy Dooper and Downgrade Donny. As you can imagine, Trover Saves the Universe does not take itself very seriously, and that's what makes it work so well.

Most games, even funny games, need to be tight and meticulous. Think about the bevy of gameplay options in Saints Row IV, or the mind-bending puzzles in The Curse of Monkey Island, or the pitch-perfect visuals in South Park: The Fractured But Whole. While those games are hilarious, there's a sense that they are trying just as hard as a "serious" game to engage players through both gameplay and dialogue.

In Trover Saves the Universe, however, there's a distinct feeling that you're just sitting back and listening to the voice actors riff for a while. Trover goes on and on about how you're becoming a buddy-cop duo; a level boss expounds upon Trover's bad habits as a former roommate; two Glorkon clones deadpan that stacking climbable blocks makes you racist (no, this does not make any more sense in context). Not every single line is funny; what's funny is that these characters, involved in a fantastical adventure where the fate of the cosmos hangs in the balance, have nothing better to do than gripe about everyday minutiae.

Like all good comedy, dissecting what makes Trover funny runs the risk of destroying the joke. Let me put it this way: If you died laughing at the Two Brothers sketch in Rick and Morty, you'll love it. If you're left scratching your head, the game may not be for you.

The level design in Trover Saves the Universe has to be seen to be believed — sometimes. Certain levels have that perfect Rick and Morty mix of gross-out humor and Lovecraftian horror. One memorable stage looks like a human anatomy course gone wrong, while another feels like a city-size clockwork mechanism. Then again, you've also got bog-standard grasslands and space stations; some levels are just a single room.

Likewise, the music is mostly just there. The techno beats sink into the background easily enough, but no track in particular stood out.

Where the sound design absolutely excels is in the voice acting. Roiland himself provided a lot of the voices, and Rick and Morty fans will be pleased to hear that the Boss and Trover mimic Roiland's TV duo pretty well. There are, without exaggeration, hours of extra dialogue when Roiland and the other actors just improv whatever comes to mind, offering additional commentary on the task at hand. Even if the actual dialogue isn't always a riot, you've got to smile at the sheer absurdity of it all.

Squanch Games wanted to give gamers something they'd never seen before with Trover Saves the Universe, and I think the company has largely succeeded. The game isn't as polished as it could be — but frankly, I'm not sure a high level of polish is even consistent with how the game is supposed to feel. It's not a fancy dinner; it's not even a lunch special at a pub. Trover Saves the Universe is what happens when you microwave a bunch of questionable leftovers on the same plate and find that, amazingly, the end result is not only edible, but pretty darn tasty.