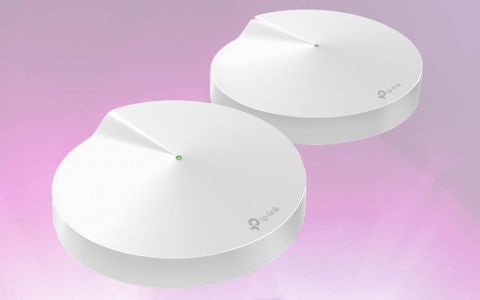 While its security software and an easy installation app distinguish the Deco M9 Plus from the mesh networking crowd, its otherwise midrange performance is marred by sometimes erratic behavior.

With a simple, easy setup and the ability to distribute an internet connection while controlling  everything from your IoT locks to thermostats, we found that TP-Link's Deco M9 Plus Smart Home Mesh Wi-Fi System ($450 for three units) can do it all. It can suffer from erratic performance and you'll need to do everything through the company's phone and tablet app. It also comes with robust built-in security.

If you like your Wi-Fi gear small and plentiful, TP-Link's Deco M9 Plus Smart Home Mesh Wi-Fi System should be right up your networking alley. Like Eero and Samsung's SmartThings, the Deco M9 Plus devices are white disks, but at 6.0 x 6.0 x 1.5 inches, they're twice as big as Eero's devices (4.8 x 4.8 x 1.3 inches). The Deco M9 Plus units are still easy to hide and third-party wall-mounting brackets are readily available.

The Deco M9 Plus disks are the same and get turned into a router or extension during the set-up process. Each has a swirl on top that is capped with an LED that glows yellow when the system is starting up, pulses blue when it’s ready to be configured and goes solid blue when it's being configured. When it's green, everything is good, but a red light means there's a problem with its internet connection.

Inside, the Deco M9 Plus has a tri-band 802.11ac networking system that can move four independent lanes of data. Each of its 5GHz bands are rated to handle up to 867Mbps, while the single 2.4GHz channel can move 400Mbps. It carries an AC2300 throughput ranking and, like the Orbi family of mesh products, the Deco M9 Plus uses a dedicated 5GHz back channel to move data from an extension to the router.

Of its eight internal antennas, six are for Wi-Fi work. There's also a Bluetooth one for setup and a Zigbee one for connecting to home-automation products.

Along the back is a power port (sorry, no power switch), two gigabit-per-second Ethernet connections as well as a USB plug; normally these ports are used for connecting printers or storage devices, but TP-Link says it's reserved for future use. There's also a recessed reset switch for returning the system to its factory software and settings.

Like many other TP-Link devices, the Deco M9 Plus kit comes with HomeCare online security. Based on Trend Micro's threat database, it can prevent malware from entering the network, keep intruders out and quarantine any infected system. You get three years of protection with  the Deco M9 Plus, but it lacks the device-level security software provided by Asus' Blue Cave and Norton Core.

Like some of its mesh competitors, the Deco M9 Plus uses Qualcomm's IPQ 4019 Wi-Fi control chip that combines 512MB of RAM, 4GB of solid-state storage for firmware settings and updates. Controlled by a 717MHz quad-core processor, the Deco M9 Plus can accommodate more than 100 simultaneous connections and dynamically streamlines the data flow.

In our Utah test facility, using Ixia's ixChariot benchmark software, the Deco M9 Plus' performance was in the middle of the pack but sometimes showed erratic behavior. Its slow updating of the app's screens was a point of frustration.

Our simulation of how well the router performs in the real world showed the Deco M9 Plus to be mediocre at dealing with walls and ceilings. Able to deliver 328.1Mbps through a metal door, the Deco M9 Plus' performance was between Samsung's SmartThings (at 329.7Mbps) and Netgear's Orbi RBR50 (at a slightly higher 361.2Mbps).

Still, it had trouble when it came to our ceiling test, where the Deco M9 Plus pushed a 388.1Mbps signal to the second floor of the lab. It moved 35 percent less than  SmartThings' 524.4Mbps

Its single hop throughput of 294.9 was off the pace set by the Orbi RBR50’s 355.1Mbps. When all three of our Deco M9 Plus units were daisy-chained, the end extension delivered 113.6Mbps, 18 percent less than the 134.1Mbps that the SmartThings' kit was able to muster.

Each of the three Deco M9 Plus devices use 6.0 watts of power and never got more than warm to the touch. If you pay the national average of 13 cents per kilowatt hour for electricity, the full set of Deco M9 Plus devices should cost a little less than $21 a year, $5 more than the estimated cost of $15 a year to operate a SmartThings' set.

MORE: Don't Rent Your Router: Here Are the Best to Buy

The Deco M9 Plus satisfied a variety of users and passed our informal saturation test. While I played HD videos on a Surface Pro 3 and an iPad Pro, I had my MacBook Air tuned in to an internet radio station as a Samsung Tab Pro S moved files back and forth with a networked disk drive. There was no lag and the audio and video came through without a skip or pause.

While the only way to set up the TP-Link Deco M9 Plus mesh system is via TP-Link's Deco app, it's one of the easiest around with simple step-by-step instructions that are straight-forward and often illustrated. The app is also available for iPhones, iPads and Android devices.

It all starts with what could be the world's smallest start-up booklet. Slightly larger than a credit card, it's pretty difficult to read. Happily, it has a QR code for getting the Deco app. There's also a short downloadable manual.

After plugging a Deco M9 Plus unit into my broadband modem and a power outlet, I opened the app on my iPad Pro and created an account with TP-Link. A verification email gets the ball rolling, but be careful, because mine ended up in the junk folder.

Next up, select the type of router you have from the interface's photos. When the unit's light pulsed blue, the Deco M9 Plus started its configuration process, followed by naming the router.

It detected my internet connection and prompted me to designate the room the router would be in. Then it asked me to name my new network and add a password. At this point the system is setup, and I connected on the first try.

I then tapped "Add Another Deco" on the app’s main page to extend the network. After I selected the home layout from the interface's choices, the software scanned for and found the Deco M9 Plus extension. Finally, the software optimized the data flow.

The last bit was repeated to add the second extension for my three-node network. When everything was finished, all three Deco M9 Plus devices updated their firmware. You'll need to be patient because it can take a minute or two for the screens to update and show the new status. All told, it took nearly 25 minutes to set up the Deco M9 Plus three-pack – 10 minutes longer than Samsung's SmartThings three-unit kit.

TP-Link includes two years of support and warranty that outdoes most of the competition, particularly Netgear's 90-day support policy on its Orbi mesh products. There's excellent support available online, from startup videos and downloads to FAQs. I love TP-Links software emulators to try out the interface without doing any damage, but there was nothing for the Deco M9 Plus.

Unlike the SmartThings two app approach, the Deco software consolidates everything you can do with the Deco M9 Plus app. The app's Overview page shows what's connected and has links to the Antivirus and Parental controls. To see the status of the router and extensions, you need to tap on the internet globe to see the details. Open any of the devices to see a Health report and the firmware being used.

Along the screen's bottom is a way to create your own Shortcuts and program IoT Automation sequences. The omnibus More section has everything from checking on the Wi-Fi settings and testing the internet speed to updating the devices and Blacklisting a device.

It's also where you deal with the HomeCare details. In addition to Parental Controls for filtering objectionable content based on age groups (Child, Pre-Teen, Teen and Adult), you can also set an internet bedtime and maximum screen time separately for weekdays and weekends.

There's a place to set up the Malicious Content Filter, Intrusion Prevention System and Infected Device Quarantine as well as Quality of Service (QOS) priorities and see a monthly report of activity.

While you can set up the devices as access points or as a mesh network, at any time you can check the system's internet speed. The Deco app, though, lacks advanced customization. There aren't adjustments like setting the Preamble, channel width and overall transmission level.

It does a reasonable job integrating home automation and IoT devices with an interface that lets you create sequences. There are detailed instructions for hundreds of devices, including those from Samsung and TP-Link.

On the downside, there's nothing specifically for Belkin's WeMo products. Still, the interface worked like a charm for setting up a Wemo LED connected light bulb. My favorite is the Test button to check on the connection.

I set up my SmartThings outlet switch to turn on the lights at night by picking the day (all of them), time (6:00PM) and name; the software does the rest. It can configure the connection to a light bulb, switch, thermostat or a lock in about a minute.

With good, though sometimes erratic performance, and a simple setup routine, TP-Link's Deco M9 Plus mesh system can fill a moderate-size house with data. By including network security software, it can protect a digital family from malware and hackers. On the downside, everything needs to be done through the TP-Link Deco app.

At $450 for three and $300 for two, you can't get single Deco M9 Plus devices. They are priced similar to the Linksys Velop and Eero three-unit mesh networking kits but much more expensive next to the $300 three-pack of SmartThings devices from Samsung. Lacking top performance, the Deco M9 Plus is the mesh kit to get if you care more about a simple set-up procedure than top speed. For the best mesh routing solution around, we still prefer the Netgear Orbi, which offers better performance and coverage, but at a higher price.