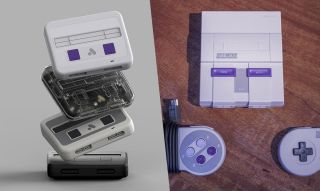 With gorgeous graphics, enormous open worlds and enormously complex gameplay, video games are better than they've ever been — sort of. What we've gained in scope, we've lost in simplicity. It's no wonder, then, that so many gamers are flocking to the retro scene.

Whether you're nostalgic and want to relive your youth or you're checking out classic titles for the first time, there is almost certainly a handful of games from the Super Nintendo that has crossed your radar. Thankfully, the days of hunting down shady ROMs are over; you now can use new hardware to play old games or even get emulated games directly from the Big N itself.

While they're by no means the only two SNES clones out there, the SNES Classic from Nintendo and the Super Nt from Analogue represent the two extremes of the hardware spectrum. The former is an inexpensive emulation box with a preselected handful of the system's best games; the latter is a pricey system that runs your old cartridges just like a real SNES would.

Which is the better fit for your inner retro gamer? Read on to find out.

The first thing you'll notice about both the SNES Classic and the Super Nt is that they're both extremely small compared to the original SNES.

The SNES Classic is positively miniscule: 5.3 x 4.3 x 1.5 inches. In fact, it looks more like a toy than a game console, something you'd hang from a Christmas tree or put on your desk as a conversation piece. There are power and HDMI ports on the back and two controller ports on the front, hidden (somewhat annoyingly) behind a pull-away panel. Otherwise, it looks like an old-school SNES that ran afoul of a shrinking ray.

The device's size causes some problems. With an HDMI cord, a power cord and a criminally short controller cord, the SNES Classic gets pulled every which way and never sits flat on a desk, unless you weigh it down somehow.

The Super Nt measures 6.6 x 5.2 x 1.6 inches. That may not sound tremendously different from the SNES Classic, but the Super Nt has a heft and solidity to it that Nintendo's console simply doesn't. Add in the extra weight from whatever cartridge you insert, and the Nt system is not going anywhere.

You can get a Super Nt in a variety of color combinations, including a classic purple-and-gray, a slick black and an inventive transparent colorway. There's a power port and an HDMI port on the back, with two original SNES controller ports in the front. It's a remarkably simple setup, although a way to eject games without pulling them (and potentially damaging the pins) would have been very welcome.

Winner: Super Nt. The SNES Classic is cute but feels a little too small and insubstantial. The Super Nt is both elegant and functional.

Furthermore, it's not as though the SNES Classic comes with a bunch of shovelware that you'll never want to play. Nearly every game on the system is an integral part of console gaming history, from Super Mario World, to Super Metroid, to The Legend of Zelda: A Link to the Past, to Street Fighter II Turbo. Even if not every game holds up that well (sorry, fans of Star Fox and Kirby's Dream Course), the SNES Classic is, right out of the box, basically a whistle-stop tour of what made the SNES great.

On the other hand, there's no denying that the SNES Classic is missing plenty of great titles: Chrono Trigger, Super Mario All-Stars, NBA Jam, Blackthorne and a number of sequels (the later Mega Man X and Donkey Kong Country games, notably). You can play any and all of these on the Super Nt — provided you can track down the cartridges, of course.

Winner: Super Nt. The fact that the SNES Classic comes preloaded with 20 beloved titles is not trivial, but it also means that once you're done with those games, you're essentially done with the system. The Super Nt can play hundreds of titles.

When playing classic games, the SNES Classic and the Super Nt look almost identical. What's going on under the hood, however, is a little different between the two systems. To fully understand why, you have to be familiar with a field-programmable gate array, or FPGA.

Briefly (and to oversimplify things quite a bit), the SNES Classic uses software emulation, similar to what you'd find by downloading ROMs from sometimes-shady websites. The Super Nt, however, uses an FPGA chip to mimic the original Super Nintendo at a hardware level. In other words, it's still emulation in the literal sense, but involving hardware rather than software. In theory, this means the Super Nt gives gamers the most authentic SNES experience outside of digging the old console out of the closet and hooking it up to a CRT TV.

In practice, though, the different forms of emulation don't matter much for everyday play. Both the SNES Classic and the Super Nt played every game we could throw at them with near-perfect fidelity. Whether we were bopping dinosaurs in Super Mario World or racing flying cars in F-Zero, the action was seamless and the HD outputs re-created the graphics faithfully — with or without CRT scan lines, depending on your preferences.

The Super Nt, however, does outperform the SNES Classic very slightly on two counts. First, the Super Nt has an output resolution of 1080p, compared to the SNES Classic's 720p. This doesn't make much difference, because no SNES game even approached HD resolutions anyway. But the Super Nt's resolution looks a little better on larger screens, and it appeared just a little bit less jagged in side-by-side comparisons.

The second way the Super Nt excels is in the sheer variety of audiovisual options you get. The SNES Classic gives you a few display modes (replicate scan lines, 4:3 aspect ratio, pixel perfect), but that's about the only thing you can do to customize your experience. The Super Nt lets you do all that as well, in addition to setting your resolution, frame rate, visual filters and more.

However, players who were put off by the difficulty and mercurial save features of SNES games back in the day should take note: The Super Nt doesn't allow save states, but the SNES Classic does. This feature allows you to suspend your game at a certain point, then pick it up again immediately at that point, as many times as you want. You can use saves to help yourself get past a difficult section or just to pick up right where you left off if you have to step away. Regardless of what purists say, in this respect, the SNES Classic is a little more forward-thinking.

Winner: Super Nt. Debates about hardware vs. software emulation notwithstanding, the Super Nt's output looks a little better, and the system gives you more options to customize your gameplay experience.

The SNES Classic controller isn't great. The cable is way too short, and the proprietary ports aren't compatible with much. However, the SNES Classic still wins the Controller category handily, because this system actually comes with a controller. Heck, it comes with two.

The Super Nt, despite its high cost, doesn't include a controller. In fact, Analogue doesn't make controllers; instead, the company has partnered with peripheral manufacturer 8Bitdo to provide a wireless SNES controller and adapter set for $40.

To be fair, the 8Bitdo set is a thing of beauty. The controller uses the original SNES port design, so you can use this controller with anything: a Super Nt, a Hyperkin Retron 5 or even an actual Super Nintendo. The 8Bitdo product mirrors the original controller's design almost exactly, and it comes in a variety of colors.

Still, buying two of these controller sets costs just as much as purchasing an entire SNES Classic — and 8Bitdo also makes SNES Classic wireless controllers, if you want the same kind of premium experience.

Winner: SNES Classic. The SNES Classic's controllers are imperfect, but at least you don't have to buy them separately.

As discussed above, it's impossible to extricate the Value discussion from the Game Selection discussion. Sure, $80 for the SNES Classic will net you 20 games and two controllers — but then what? SNES titles aren't like today's open-world epics. You could very conceivably blow through the entire SNES Classic library in three months or less, and then you'd be left with a paperweight (admittedly, a very attractive one).

Still, if we're going to compare apples to apples, let's assume that you don't already own the games in question, or any old SNES controllers, and have to start from scratch. The Super Nt costs $190; each recommended controller set costs $40.

Here's the kicker: I went on eBay to get a rough idea of how much it would cost to assemble a cartridge collection of all 20 games from the SNES Classic. While the amount you spend can vary, depending on where and when you shop, the number I came to was (hang on to your hats here) $665. That's a total cost of $935, nearly 12 times what the SNES Classic costs.

Granted, a big part of this cost is due to the incredibly rare EarthBound, and not every gamer is going to want all 20 titles. Furthermore, if you already have a full contingent of titles from your childhood, you can buy the Super Nt and use it with all your old gear right away.

Winner: SNES Classic. Although you may get more use out of the Super Nt in the long run, there's no denying that the SNES Classic is a better deal. The sheer amount of stuff you get for $80 is impressive.

In the final analysis, the Super Nt is the better product overall — assuming you're willing to provide your own cartridges and pony up the pricey cost of entry.

It's worth pointing out that the two devices don't necessarily target the same audience. The SNES Classic is more of a gift item, something you could give a friend or loved one, who could then pick up and play the system immediately. If you're buying a system for someone too young to have owned an SNES the first time around, the SNES Classic is a simple and inexpensive way to introduce them to the best games of yesteryear.

The Super Nt appeals to more of a DIY, enthusiast crowd. Having a pre-existing cartridge collection is nearly a prerequisite, but if you do have one, you'll be glad you kept it. Basically, if you had any interest in the advantages of hardware over software emulation before you read this article, the Super Nt is probably your best bet.

While the SNES Classic was tough to find at first, it's popped up in stock pretty regularly at Amazon, GameStop and other retailers, if you know where and when to look. The Super Nt is currently available for preorder and will start shipping soon. Either way, it's high time to get out there and party like it's 1993.