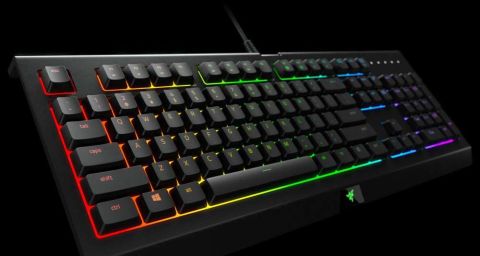 The Razer Cynosa offers decent membrane performance for the price, but you should spring for a mechanical keyboard if you can.

We haven't seen a membrane model of a gaming keyboard in a while, for better or for worse — but mostly better. However, since gaming has to come full circle every few years, we now have the Razer Cynosa ($60) and Cynosa Pro ($80): a pair of membrane keyboards with full RGB illumination, full compatibility with Razer's Synapse software and not much else to set them apart from a reasonably responsive office keyboard.

Perhaps it would be wrong to damn the Cynosa — which is not that bad, in the grand scheme of things — for what it isn't, rather than take aim at what it is. But the simple fact is that the Cynosa costs much, much more than the average membrane keyboard, and the benefits it offers in return are limited. If you prize aesthetics above all else and don't have much money to spend on a gaming keyboard, it's worth a look. Otherwise, save your pennies for a mechanical model.

The Cynosa (named, like most Razer keyboards, for a venomous spider) looks, at the risk of being flippant, like a keyboard. It's black all the way around, with a small Razer logo at the bottom. (Unlike some of Razer's other recent keyboards, it doesn't come with a magnetic wrist rest, which is disappointing.) The keyboard is full size, but doesn't offer discrete media keys or extra macro buttons.

If you've gone for the standard Cynosa, each key features individual backlighting, which is a nice touch. I can't think of any other membrane keyboards that offer the same level of lighting detail. However, the Pro takes it one step further by adding an "underglow." This means that the entire panel underneath the keys features customizable RGB lighting, lending the whole keyboard a rich palette that contrasts perfectly against the black chassis. Whatever criticisms I have about the Cynosa, I sincerely hope that Razer brings the underglow technology to some of its other products.

Razer also points out that the Cynosa is "spill-resistant." I contacted Razer to learn exactly what the term meant, and heard back that membrane keyboards, in general, are not as easy to damage with water as mechanical models. However, there doesn't seem to be anything special about the Cynosa that makes it more durable than the average office keyboard. If you spill water on the Cynosa, it probably won't break immediately — although you still shouldn't try your luck, if you don't have to.

Aside from the lighting, the most striking feature of the Cynosa is its membrane keys. My stance on membrane keys has softened over the years, especially since I've seen firsthand just how bad they can be. Razer has also done a lot to take the "meh" out of "membrane," with comfortable keycaps and decently long key travel.

Razer's innovations are especially helpful when it comes to typing. Using TypingTest.com, I scored 126 words per minute with three errors on the Cynosa, versus 119 words per minute with five errors on my regular Logitech G810. The Cynosa's keys tend to spring back a bit faster than the mechanical models I'm used to, so if you're a truly prodigious typist, you might find that helpful.

Razer has done a lot to take the "meh" out of "membrane," with comfortable keycaps and decently long key travel.

On the other hand, there's no getting around the fact that having two electrically linked membranes just don't feel as good as having an actual switch beneath each key. Something about the Cynosa's interface feels artificial and, if not "cheap," exactly, then at least not premium.

The Cynosa runs on Razer's new Synapse 3.0 software. The software itself still has a few design issues to work out. Everything works as advertised, sure, but the white-on-green color scheme is a bit of an eyesore, and it's not clear how to find every option, like it was in Synapse 2.0.

As an example: After updating the Synapse software to its latest version, I plugged the Cynosa into it. The software did not recognize the keyboard. In order to make the peripheral work, I had to restart the machine, unplug the Cynosa, plug it in again, and then update the Synapse software a second time. Thankfully, I only had to undergo this process once, but it was a sloppy procedure that I could have done without.

Once that's all dealt with, though, the Synapse software is pretty robust. You can reprogram any key, set up individual profiles, program custom Chroma lighting, create macros or even set keys to loop themselves after a fixed period. (This could be useful if you need to hit the same key over and over in a game.)

The Cynosa was solid when it came to gameplay, at least. I ran it through Overwatch, StarCraft: Remastered, The Witcher 3: Blood and Wine and Marvel Heroes Omega in order to see how it would handle a variety of different genres.

The Cynosa is probably not refined enough for the tournament scene, but anyone playing at home should find it suitable.

The results were good across the board — better than a regular office keyboard, certainly, but not up to the same level of responsiveness or comfort you'd get from, say, a Razer BlackWidow.

Still, whether you want to support your allies as Zenyatta in Overwatch, or explore the wilds of Toussaint in Blood and Wine, the Cynosa will help you get the job done. The keyboard parsed my commands accurately and quickly, and I had no problem using it for hours at a time. It's probably not refined enough for the tournament scene, but anyone playing at home should find it suitable.

Ultimately, the Cynosa isn't so bad — it's just that we've already seen much better, from both Razer and other companies. I've explained before why membrane keys aren't worth the short-haul savings, and while the Cynosa is better than most membrane keyboards, it still has all the problems inherent to the style.

Yes, the Cynosa is relatively inexpensive — but if you're willing to pay $80 for a gaming keyboard, you should at least consider dropping another $20 or $30 on a mechanical alternative such as the Logitech G610. (Especially since mechanical keyboards can last twice as long, or longer.)

In the end, I'll begrudgingly admit that the $60 price point and better-than-average keycaps make the Cynosa a potentially attractive option for entry-level PC gamers who really, truly do not care about the distinction between membrane and mechanical keys. But if you can spend a little more to get something exceptional, you absolutely should.