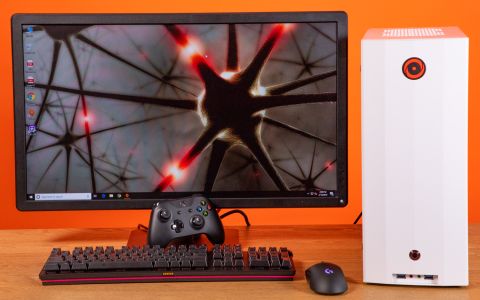 The Origin PC Neuron has strong overall performance, a lot of customization options and an easy-to-open panel, but the fans can be too loud.

What makes Origin PC's Neuron gaming desktop so special is how customizable it is. The boutique manufacturer will outfit this baby with pretty much anything you want, and for $2,490 (starting at $1,505), you can get our Ryzen 7 2700X and RTX 2080 configuration that delivered powerful graphics and CPU performance. And if you want to customize it yourself in the future, the innards are easily accessible via a magnetic glass door.

The Neuron doesn't include any peripherals, and the fans get pretty loud even when the machine isn't performing rigorous tasks. But overall, the Neuron is a solid RTX gaming desktop that you can truly make your own.

The Neuron's pearly-white chassis is smooth, but it reminds me of a dentist's office. Thankfully, the PC's design is fully customizable at the point of purchase. The front panel has a glowing Origin logo at the top and a power button at the bottom accompanied by a few select ports. The left and right end of the panel stylishly curve inward to meet the rest of the chassis.

The left side has a glass door showcasing the guts of the machine, while the right side features a flat white panel accented with a hexagonal pattern stripped along the side for ventilation.

What makes Origin PC's Neuron gaming desktop so special is how customizable it is.

The top and bottom panel are covered in the same hexagonal patterns. The bottom holds four bumper magnets, but you can easily move them to the right panel and lay the desktop flat. It was alarming to see the back plating for the ports because it looked so janky and uneven.

The graphics port has three DisplayPorts, an HDMI port and one USB Type-C port. There are also two USB 3.1 ports and microphone and headphone inputs on the front panel.

You can get into the Neuron through its magnetic glass door on the left-hand side, where you can easily upgrade most of the components, like the CPU, GPU and RAM. You have to take an additional panel off on the bottom (the PSU shroud) to access the drives and power supply (it's locked in with three Phillips head No. 2 screws).

The Neuron ran Battlefield V at 85 frames per second at max settings as I blasted Nazis from miles away with my tank shells.

Note that the right panel does not come off, so it's a little difficult to manage your cables if you want to customize them yourself.

Armed with an Nvidia GeForce RTX 2080 Founder's Edition GPU with 8GB of VRAM, the Neuron ran Battlefield V at about 85 frames per second on Ultra at 1080p with ray-tracing on as I blasted Nazis from miles away with my tank shells.

On the Rise of the Tomb Raider benchmark (Very High, 1080p), the Neuron nailed 89 fps, surpassing the 79-fps gaming desktop average. The RTX 2080-powered Vengeance and Trident both did better, at 91 fps each. At 4K, the Neuron pushed 28 fps, which is under the 37-fps category average as well as our minimum playability threshold of 30 fps. It matched the Vengeance (28 fps), but the Trident scraped across to the minimum 30 fps.

On the Grand Theft Auto V benchmark (Very High, 1080p), the Neuron scored 99 fps, defeating the category average (95 fps) and the Trident (89 fps), but coming up short of the Vengeance (110 fps). Bumping the game to 4K, the Neuron matched the Trident at 35 fps and beat the Vengeance's 33 fps, but all of them fell short of the 43-fps category average.

The Neuron, along with the Vengeance and Trident, scored a perfect 11 on the SteamVR Performance Test, toppling the 9.5 category average.

The Neuron had no problem blazing through 40 Google Chrome tabs and three 1080p YouTube videos while Battlefield V ran in the background, thanks to its AMD Ryzen 7 2700X processor with 16GB of RAM. However, the system's fans produced quite a bit of noise, and would constantly rev up and down while I was gaming and even when performing normal tasks, which was incredibly annoying.

The Neuron matched 65,000 names and addresses in 28 seconds on our Excel test, which is a few seconds ahead of the category average (0:32). While the Vengeance (0:33) fell behind, the Trident (0:25) crawled ahead of the Neuron.

The Neuron transcoded a 4K video to 1080p in just 5 minutes and 50 seconds, which surpasses the 6:54 category average but not the Trident's speedy 5:38.

Origin's 512GB SSD copied 4.97GB of data in just 8 seconds, translating to 636 megabytes per second and destroying the 414 MBps category average. The Vengeance (480GB SSD) and Trident (512GB SSD) both have a transfer rate of 424 MBps.

Origin PC offers this rig fully customizable, offering both AMD and Intel motherboard options with a variety of CPU choices for either manufacturer.

Meanwhile, the ultimate version will run you $11,621, which is outfitted with a AMD Ryzen Threadripper 2950X CPU, an RTX Titan GPU with 24GB of VRAM, 64GB of RAM and five 4TB SSDs.

The Neuron also offers tons of cosmetic add-ons. You can pay an additional $329 for a metallic print, which comes in six colors, including Atmos Blue, Sabot Grey, Cyborg Green, Eternal Pink, Epic Purple and Horizon Yellow. You also have the option of getting either the $199 HD UV glass print or a $249 HD UV textured print of Origin's stylistic neurons. With the glass print, you can get it customized, but it'll likely cost more. You can combo one of those with $41 RGB lighting.

Origin PC includes a one-year limited warranty with the Neuron.

The Origin PC Neuron ($2,490 as tested, $1,505 starting) is the pinnacle of gaming PC customizability. On top of that, it offers great overall performance and an easy-to-open panel for future upgrading. But for the price, it should come with some peripherals, and it doesn't help that the fan is loud.

For a similar price ($2,499 as tested, $1,999 starting), you can get the MSI Trident X, which offers a slimmer design, included peripherals and performance on a par with the Neuron.

But if you want a powerful PC that you can truly make your own with a ton of internal and external customization options, the Origin PC Neuron delivers.