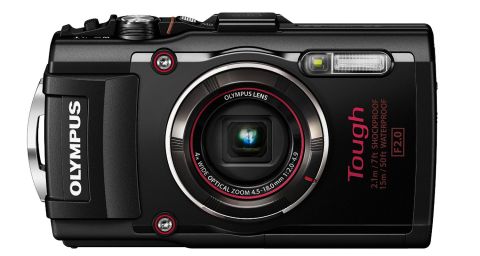 With a durable but simple design and impressive image quality, the Olympus Tough TG-4 is our pick for the best rugged and waterproof camera.

If you want to take pictures when you're out kayaking, hiking or biking but you don't want to subject your smartphone to the kind of punishment those activities usually entail, then it's time to check out more outdoor-friendly cameras. That's where Olympus' TG-4 comes in. This $330 camera is made to withstand water depths of up to 50 feet and drops from up to 7 feet high. And with a 16-megapixel sensor that's made for both land and sea, the TG-4 can easily keep up with your active lifestyle while snapping sharper and more detailed pics than its competition.

In order to live up to its rugged cred, the TG-4 features two flaps with a dual latching system to make sure dust, water and other harmful elements stay away from the sensitive parts of the camera. On the right side, there's a small grip, so you have a little extra something to hold on to. However, even if you have smaller hands, it's pretty easy for your fingers to stick out into your field of view when shooting.

On top, there's a nice, big shutter button with two-step action (half-press to focus and a full press to take a photo), a slider for controlling the zoom, and the power button. In back, there's a vibrant, nontouch 3-inch LCD display, a handy dial for selecting program modes, and a very useful directional pad for adjusting settings and navigating through the camera's menus.

The one thing that seems to be missing is a micro-USB port. Olympus chose to go with a proprietary USB connector instead of a more standard option, which means you have to carry around a separate cable when you want to recharge the camera. There's also a micro-HDMI port, so it's a cinch to hook up the TG-4 to a nearby TV or monitor when you want to show off your pics.

As far as shooting modes and controls go, the TG-4 has almost everything you'd want. Olympus includes built-in GPS and Wi-Fi to help you track and share your adventures, as well as a full-featured shooting mode with a dedicated scene dial. While some users may complain that the camera's Settings menu can be a little overwhelming, I'd rather have more controls than be limited to a handful of settings, as is the case with Canon's PowerShot D30.

A couple of nitpicks include that you're limited to only f/2, f/2.8 and f/8.0 when in aperture priority and manual modes, and that the 4x zoom is slightly less powerful than the 5x options on Canon's and Nikon's cameras. However, those are pretty minor quibbles.

The Olympus also falls a bit short in water resistance; it can withstand depths of just 50 feet, compared with 100 feet for the Nikon Coolpix AW130 and 150 feet for the Canon PowerShot D30. So if you're going on some deep dives, the TG-4 may not be your best option.

While I was out looking for some action, I stumbled across an indoor skydiving center that provided the perfect opportunity to test each camera's adrenaline-capturing abilities.

After several shots with the TG-4 and a few of its competitors, the Olympus came away victorious. It not only did the best job of freezing the action of the skydivers but also maintained a nice, even exposure in a challenging environment while also capturing the most detail in the safety net below. My only real complaint is that the colors of the equipment rack in the back didn't have the same kind of richness as it did in the Nikon Coolpix AW130's photo.

If I didn't know better, I would have a hard time guessing that a photo of a flower taken by the TG-4 was actually snapped at night. The Olympus' photo looked sharp and actually a little too vivid. Aside from a bit of graininess in the darker areas of the photo, as well as white balance that erred a little too far on the orange side, I was pretty impressed with the TG-4's low-light shooting.

In our tests, it became pretty clear that the TG-4 captures sharper details and brighter, more saturated colors than its competitors. During our underwater testing, in which we submerged the camera in an indoor pool and took photos of a test scene featuring a synthetic coral aquarium decoration, the TG-4 captured much more detail. The TG-4 also adjusted white balance, which resulted in a more accurate and attractive bluish color cast. While a tiny bit of shadow detail was lost in the center of the picture, it captured more than the next best camera, the Nikon Coolpix AW130.

MORE: Camera Recommendations for All Kinds of Photographers

When we took a picture of our test pattern on auto at ISO-1600 in our lab, the TG-4 had the sharpest-looking photo, with the cleanest edging around the squares and the least amount of graininess. The one area where the TG-4 fell a bit short, however, was in color saturation, as both the Nikon Coolpix AW130 and the Canon PowerShot D30 captured brighter and richer colors.

While the TG-4 uses a nonstandard USB port, its wide range of modes, top-tier image quality and superior ease of use make its minor oddities easy to overlook. Both above and below the surface, if you want a rugged sharp shooter, the $330 TG-4 is the camera to get. The only real exception would be for divers who want to go deeper, in which case the $275 Nikon Coolpix AW130 (100-foot water resistance) or the $299 Canon PowerShot D30 (150-foot water resistance) would be better options. But if you want the best image quality from an underwater camera with simple, full-featured controls, the TG-4 is worth the expense.