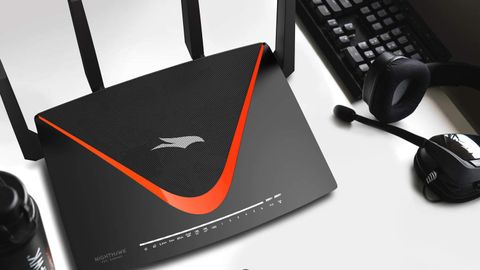 Looking for an online advantage when up against the world's best gamers? Netgear's Nighthawk XR700 Pro Gaming Router delivers the goods for large homes.

The hottest gaming router around has arrived. The Netgear Nighthawk XR700 Pro Gaming Router brings together today's fastest home-networking technologies, from 60GHz 802.11ad operations to 10Gbps wired connections. At nearly $500, it's a lot to spend on a router, but when you are mouse-to-mouse with an online opponent, every advantage helps.

Think of the Netgear Nighthawk Pro Gaming XR700 as the bigger (but younger) brother of last year's Netgear Nighthawk XR500 that not only has more Wi-Fi power but adds a few extra wired ports and the ability to move up to 10Gbps of throughput. Slightly bigger and more aggressive looking than the XR500, the XR700 measures 14.1 x 10.0 x 2.0 inches, or about 50 percent larger than the Linksys WRT32X router.

Wedge-shaped and black with a swooping red strip, the XR700 has the Netgear logo front and center. The top's inset mesh screen allows heat to flow out of the router, and over a week of heavy use, it never got more than warm to the touch.

On the underside of the router is a set of soft rubber feet that can prevent marring a favorite desk or coffee table. It has recessed insets for wall mounting.

The latest addition to the alphabet soup that is Wi-Fi, 802.11ad has the power to shake things up by raising the router's transmission frequency to 60GHz – 12 times that of 802.11ac's top speed. This yields a theoretical top throughput of up to 7Gbps of data through a WiFi network.

The only downsides to using the AD spec are that range is limited to the same room as the router — we tested it at roughly 9 feet — and at the moment there are no notebooks that have 802.11ad equipment built in. But with Wi-Fi 6 (also known as 802.11ax) hitting the mainstream right now, it's not likely that any systems will hit the market with wireless AD built in, so you'll need to buy a separate adapter to make full use of this router's capabilities. We used a Millitronic MG 360 USB 802.11ad adapter for our testing.

Most of the router's front edge is covered with flashing white LEDs for power, internet connection and indicators for the 2.4-, 5-, and 60GHz networks along with lights for its 10G capability, its pair of USB ports and the guest network. There are also LEDs for the router's gigabit LAN connectors but it lacks the main LED light of the Asus ROG Rapture GT-AX11000.

It's a lot to look at and or ignore and there's a switch to turn all off except for the power light. On the right is a lighted switch for turning Wi-Fi transmissions off, essentially converting the XR700 into a wired router. There's also a button for initiating the Wireless Protected Setup (WPS) protocol for quickly connecting a device.

Other than its lack of Wi-Fi 6 capabilities, the XR700 is about as advanced as it gets. It has a 10G SPF+ port for a maximum of 10Gbps throughput, although few computers are available for this spec. It can also handle 802.11ad (aka WiGig) transmissions, allowing the XR700 to create a 60GHz short-range network capable of carrying 4.6Gbps of data.

The router's back has six gigabit LAN ports – two more than most other routers – as well as the 10G SPF+ connector and the broadband input. There are buttons for turning the router on and off as well as a recessed reset key and a way to turn the router/s LED light show off.

The XR700 has a pair of USB 3.0 ports inset on the left side. About the only thing the router lacks is the Linksys WRT32X's ESATA port for connecting a hard drive.

The quartet of active antennas can be swiveled to grab the best signal. The antennas, however, can't be replaced.

While most routers get by with a single integrated interface, the XR700 has two: Netgear's Nighthawk app for most router management functions and the Duma OS software for gaming optimizations. Each is well designed, but it can be a hassle going between them.

The Nighthawk app's main screen has six functional icons: Device Manager, Internet Speed, Wi-Fi Settings, Guest WiFi, Traffic Meter and Support. The app interface is nice, but the main menu didn't fit on my Samsung Galaxy Note 9's screen and required scrolling up and down to access all of the menu icons.

Open any section of the app and you have access to a good amount of information as well as the ability to adjust the router's settings. For example, after tapping the Wi-Fi Settings icon, I had access to change the name and passcode for each network. In that same menu, you can consolidate both networks under a single name using Netgear's Smart Connect option.

The Quality of Service adjustments determine who gets the lion's share of the available bandwidth, and the XR700 has a nice Traffic Meter that shows the amount of data that the router has been moving. There's also Ookla's Speedtest instant internet speedometer, for checking your bandwidth speeds.

For configuring anything deeper, you need the DumaOS interface. It's a gamer's dream come true that lets you pick and choose your gaming opponents based on geography and network latency with an excellent Geo-Filter. This can give you an advantage over a remote opponent and works with a dozen games, including Call of Duty, League of Legends and Fortnite. Additional games should be added soon, and a current list of supported titles is shown in the Geo-Filter menu.

As with the Nighthawk app, there's so much information available on the DumaOS interface that the screens feel cramped. I needed to zoom the browser out to 50 percent to get it all in.

Finally, DumaOS offers a few functions that go beyond gaming, such as viewing a map of networked devices, checking the online status of the router and even creating a Virtual Private Network (VPN).

Performance improved slightly on the soundboard test, where the Archer C5400X and the XR500 recorded bandwidth of 832.2Mbps and 802.0Mbps. By contrast, the XR700 was closer to the mark with 793.7Mbps.

When it came to simulating real-world Wi-Fi transmissions by sending the signal 30 feet across the room and then up a floor, the XR700 was middle of the pack with 715.2Mbps available. By contrast, the Archer C5400X and XR500 pushed 786.2Mbps and 670.5Mbps.

In my old 3,500-square-foot home, the XR700 had a 95-foot range with an iPad Pro using its 802.11ac hardware. Still, the router left a couple of dead zones in the basement. I used a Millitronic MG 360 USB 802.11ad adapter for testing, and for those who want to use this high-speed standard, it's a must-have device. It has some limitations, though; the 9-foot range covered only about half the length of my office, and the adapter itself is huge and awkward. With it, the XR700 is excellent for intense close-up networking, but for traditional Wi-Fi use, stick to the 802.11ac transmissions.

I used the XR700 over a week of playing games, watching 4K videos as well as sending emails and working the web. The router succeeded in playing HD and 4K videos on a Surface Pro 3 and iPad Pro while a Macbook Air played an internet radio station and a Samsung Tab Pro S transferred data onto and off a networked drive.

All told, the router used 15.1 watts of power but never overheated. At the national average of 13 cents per kilowatt hour of energy, the XR700 should cost about $17.20 per year to operate.

Getting the Netgear Nighthawk Pro Gaming XR700 router set up took about 7 minutes and started with me firing up the company's Nighthawk app on my Samsung Galaxy Note 9 phone. You can use a browser connection with a Windows PC or Mac if you like.

After plugging the router in and connecting it to my broadband modem, I waited for everything to start up and then connected my phone to the default network (Netgear22) and semi-randomized password. The default network name and password are found printed on a sticker on the underside of  the device.

Next, I created a Netgear account and set up two-step authentication for getting into the router's settings. For ease of setup, Netgear gives you the option of signing in with your Facebook account, but for the sake of security, I chose not to.

The app took over by finding the router and remotely checking its connections. I personalized it with a network name and password but declined to use the same login credentials for getting into the router's admin settings.

I finished by answering security questions to verify my identity if I forgot the password.

The XR700 allows lots of configuration options for setting up the router but you need to use two separate interfaces: the firmware on the router (available through the Nighthawk app) and the DumaOS software. Switching between the two apps is awkward, and we wish there were a single tool that offered all of these features in one place.

The Nighthawk app has the expected router adjustments, like changing the network names and firewall settings on the router. A speedometer let me check my internet connection, and I was able to get a 189Mbps connection of my 200Mbps bandwidth on the first try. I was also able to reboot the router remotely and see what was connected, right from the mobile app.

The DumaOS setup is the icing on the gaming cake with an excellent Dashboard that summarizes the router's activities. The System Information window showing everything from CPU and flash storage use to router uptime and the coming and going data packets. At the bottom are the most recent Log entries.

All aspects, like the Geo-Filter and the QOS, are adjustable. The Settings section is a cornucopia for those who like to tweak their router's settings. I was able to block websites, set it up for 20/40MHz channel widths or go all the way with 160MHz channels. On the downside, you can't adjust the router's transmission level to keep the signal from spilling over into the neighbor's apartment or yard.

There's also the choice of using the device as a Wi-FI router or a high-powered wired access point. The best part is that you can test any setting change and quickly go back if it doesn't work out.

As is the case with other Netgear networking products, the XR700 has lots of help available online. In addition to setup assistance and troubleshooting, there's a huge manual, videos and new firmware. There's excellent 24-hour technical support, but while the router comes with a one-year warranty, you get only 90 days of technical support. It costs $100 to get two years of warranty coverage and support.

With a low-latency design and the ability to blast out high-speed data over 802.11ac and 802.11ad networks, the Netgear Nighthawk XR700 Pro Gaming Router is the one to get for those who battle in medieval villages, fly through space or want to win the World Cup. It can not only limit your online opponents by geography, but the XR700 is faster and more capable than the Netgear Nighthawk XR500 while adding the ability to connect with a 10 gigabit-per-second wired link.

The Nighthawk XR700's biggest flaw is the high-flying price tag, though for dedicated gamers, it may be a small price to pay to settle a digital grudge. But compared with the Editors' Choice TP-Link Archer C5400X, it has other issues, too. The XR700 has lower performance at some ranges, and a heavy reliance on 802.11ad, which is far from a commonly supported standard. Finally, it falls short of the extreme performance you can get from the more conventional and less expensive TP-Link Archer C5400X, which remains our top pick.