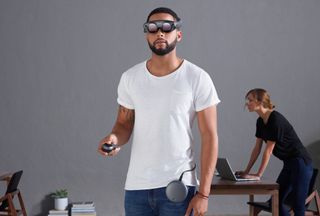 Looks like AT&T has found a new friend. The telecom giant recently announced that it's partnering with augmented reality company Magic Leap to release the latter's debut product. Dubbed Magic Leap One, Creator Edition, the device is being billed as a wearable computer "that will enrich real-world experience with digital content."

Slated to ship sometime this year to "qualified" developers and designers, Magic Leap One will be available exclusively at AT&T when it's ready for consumers.

This isn't the first time the world has seen Magic Leap's fancy glasses with their futuristic steampunk aesthetic. Called Lightwear back in February 2018, the mixed-reality headset will be powered by a circular device called the Lightpack, and it features a remote capable of motion control.

MORE: Augmented Reality Glasses: What You Can Buy Now (or Soon)

While it's nice to know that Magic Leap will actually start shipping its funky-looking headgear, we still know next to nothing about the device. Pricing has yet to be announced, and we're pretty much in the dark app about apps, battery life and other pertinent information outside of the heady promise that it's supposed to change the way we use AR.

Questions like how good the service is and how much it costs are ones that will have to be answered if Magic Leap is going to have an appeal beyond early adopters and get general consumers interested, said Ramon Llamas, research director for IDG's mobile devices and AR/VR research team. "Is [an AT&T-Magic Leap partnership] significant? Yes," Llamas said. "Is it the one thing that flips on the the light switch and makes 1,000 flowers bloom? Probably not."

Missing details aside, I'm not sure if this exclusivity detail hurts or helps Magic Leap. With 5G networking on the way, it's definitely a cool feather in AT&T's cap. But with a decidedly lukewarm reception to VR headsets from consumers to date, I'm not convinced that Magic Leap hitching its wagon to AT&T will get Magic Leap the attention and dollars it wants — especially if the price rivals a high-end phone or tablet as Magic Leap founder Rony Abovitz intimated back in February.

"AT&T is an important partner," Llamas added. "But it can't be the only partner."

The partnership makes a lot more sense for AT&T, which Llamas pointed out, is making a lot of bold movies lately. In addition to its Magic Leap deal, it's also one of the carriers that will offer the holographic Red Hydrogen One phone later this summer. "AT&T is trying to be more than just a phone company. They want to be a network," Llamas said. "It's one thing to have a network, but you also need devices to run on it."

As for Magic Leap, here's hoping that the Creator Edition is just as revolutionary as the company says it is.