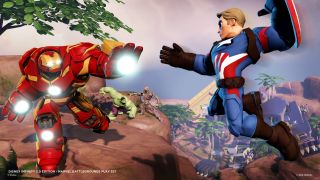 NEW YORK — Combining video games and toys is either a brilliant amalgamation of childlike wonder or an insidious plot devised by crafty plutocrats to separate you and your children from your money. Either way, games that sync with action figures are here to stay for the foreseeable future, and Disney Infinity 3.0 is one of the foremost titles in the genre. In the Disney Infinity 3.0 Marvel Battlegrounds Playset, Marvel heroes and villains will clash in a comic-book-inspired adventure mixed with a four-player fighting game.

I sat in on a panel about Marvel Battlegrounds at New York Comic Con this weekend, and while Disney Infinity has been something of a mystery to me thus far, the new game sounds like an interesting departure from the series so far. Here's how it works: in a Disney Infinity game, you use real plastic toys of Disney, Marvel and Star Wars characters to unlock in-game characters. You then use those characters to participate in adventures, which come as physical "playsets," or round discs that interface with the games to create digital levels and scenarios.

Marvel Battlegrounds is a playset that will launch in March 2016 (no price announced yet, although most playsets cost between $20 and $35) and make use of all existing Marvel toys: both 2.0 and 3.0 editions. This includes existing characters like Spider-Man, Black Widow and The Incredible Hulk, as well as three new ones: Hulkbuster Iron Man, Ultron and a redesigned Captain America. (Not coincidentally, the Captain America: Civil War film will also come out in the first half of 2016.)

The key difference between Marvel Battlegrounds and the Disney sets that preceded it is that this set turns the gameplay competitive. In the playset's storyline, Loki and Ultron have teamed up to create robotic duplicates of some of the Marvel universe's greatest heroes and villains. As such, knowing who is friend and foe becomes almost impossible, and heroes wind up fighting each other. It's not quite Super Smash Bros. in terms of gameplay depth, but it's an interesting new twist on the up-until-now cooperative formula.

Each character has a mix of melee combos, ranged attacks and game-changing super-moves. Furthermore, as the campaign progresses, players will unlock battlegrounds ranging from the Brooklyn Train Yards to the S.H.I.E.L.D. Lunar Base and beyond. Each of these battlefields has environmental hazards, such as oncoming trains or electrified floors.

Moreover, each Marvel character from the Disney Infinity 2.0 set has been retooled for full compatibility with the Battlegrounds expansion. This process involved rebalancing the characters and giving each one a totally new skill set, but the bottom line is that no toy will be wasted. (Other Disney Infinity toys will still only work in the freeform Toy Box mode, meaning that you won't be able to pit Jack Sparrow or Mr. Incredible against the Avengers, sadly.)

Players can get a jump start on Marvel Battlegrounds in November when the first toys from the set launch. The aforementioned Iron Man and Ultron will cost $15 apiece, while the Comic Con panelists promised additional unannounced characters.