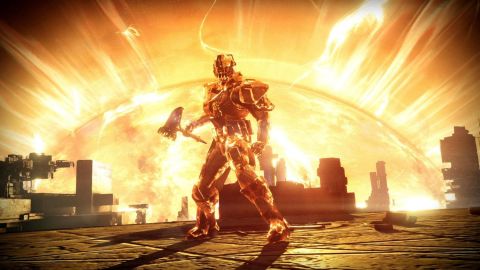 Year Two of Destiny is de-Dinkled, has upped the difficulty, given you a sword, and finally become a game you can invest in.

When Destiny first arrived on consoles in September 2014, there was a lot to love about the game. It was a satisfying shooter in the vein of Halo, which was also created by Destiny developer Bungie, but with all the fun loot and demand for teamwork found in massively multiplayer online role-playing games such as World of Warcraft.

Unfortunately, Destiny had a grind so mind-bogglingly brutal and dull that this gamer found doing dishes preferable. The title also lacked anything resembling a story, leaving gamers twiddling their thumbs and, in many cases, wandering off to more interesting pastures.

The Taken King, the third expansion pack for Destiny, and the first major component of Destiny Year Two, fixes a lot of those problems and adds new maps, missions and powers, along with enough new mechanics to make its $39.99 price tag ($59.99 when including all Year One content) absolutely worth it.

One of the most immediately noticeable changes in The Taken King concerns Destiny's main companion. Peter Dinklage's endearing, if stilted, voice-acting as the character of Ghost, the story's narrator, has been booted and replaced with that of professional voice-over actor Nolan North.

North narrates much of the proceedings in a soft and gentle tone. There's a whisper in his voice, and an eagerness that suggests the kind of youth and naiveté a tiny ageless floating robot shouldn't have.

Ghost features much more prominently in the game now, both in Year One and Year Two content. Bungie has really embraced a character that originally came across as a more masculine, and mildly less irritating, version of Navi, the fairy that guides players through the 1998 Nintendo classic The Legend of Zelda: Ocarina of Time. Because the player character (i.e., you) doesn't speak, all of your reactions have to be filtered through the little guy, affectionately called NolanBot by fans.

However, this does raise the question of why there's only one voice choice. Having Nolan North in your ear for hours at a time isn't so bad, but when you can choose the voice and gender of the personal assistant on your real-life smartphone, it makes you wonder why you can't do the same in a pricey video game.

Woah, This Game Has Characters?

More noticeable than Dinklage's departure is the increased presence of the other supporting cast. In Year One, a whole cast of characters served as nothing more than shopping centers and quest givers. There was no reason to learn about, or even be interested in the robots, humans and other beings populating Destiny's world.

The backstory of the Destiny universe was delivered piecemeal via "Grimoire cards" that could be accessed only via Bungie.net. That meant that if you wanted to know what the heck was happening in the game, you had to bust out your computer and look things up. It was a neat attempt at shaking up how stories are told in video games. But it was also a significant failure, as only the most passionate of Destiny players bothered to access the cards. The rest of us were just confused.

In Year Two, Bungie takes a step back into traditional storytelling methods. The characters, and the story they're telling, are now front and center, along with gorgeous cut scenes that finally give us the context necessary to make the story missions engaging.

If there's any problem with this new story, which involves an angry outer-space dad out for revenge against Earth for murdering his evil baby boy, it's how heavily it leans on Firefly and Castle star Nathan Fillion's performance as Cayde-6. Fillion is tremendous as a mischievous leader of the cause to save humanity (a type of role he has some experience with), but the game's reliance on him can sometimes make the other characters appear to be sticks in the mud. There's got to be enough sarcasm and wit to go around, especially when you have Fillion bouncing off seasoned actors such as Lance Reddick and former Firefly co-star Gina Torres.

Screw You Grayskull, Now I'VE Got the Power

If you're as bummed as I am that the game hits hard on the tired "sassy space pirate sort of saves the day" trope, then take heart, because while the story can sometimes feel a little rote, the game's mechanics are anything but.

Destiny's Titan, Warlock and Hunter classes all get new powers to use when they're not blasting faces with their shotguns and sniper rifles. Titans can now fling giant flaming hammers that cover the ground in fire. Warlocks channel their inner Darth Sidious and can float across the ground shooting lightning from their fingers (but please don't shout "zap" every time you do it — your teammates will get annoyed). Hunters have the short end of the new-powers stick, now able to call upon a giant purple bow and arrow that lobs light onto the ground that then traps the bad guys. Its not nearly as bombastic as the new powers of the Warlocks and Titans, but that's OK, because there's one new weapon available to all three classes that instantly levels the playing field.

It's a sword. You do a quest and you kill some bad guys, and a giant armor-clad guy saddled with the name Lord Shaxx gives you a sword. In a game in which you can shoot nipples off aliens from half a mile away, it may seem goofy to run around slashing up people with a sword. But that's because you haven't actually gotten to play with this sword.

When the sword is drawn, your camera switches from first-person to third-person view, so that you can watch yourself slice and dice your way across maps like a character in Ninja Scroll.

That third-person view is also extremely helpful when you have to do any of the platforming Year Two has incorporated. Destiny flirted with platform-jumping in its Year One raid, Vault of Glass, and since then, the game's developers have apparently decided to put a ring on it — much to the detriment of every single player, ever. You know where platforming shouldn't have much of a role? In a first-person-shooter, in which your field of vision is limited to whatever is directly in front of you.

The platforming is particularly irksome in Destiny's major new area, the Dreadnought — the villain's enormous ship looming over Saturn. As you wander through this cavernous vessel, you find yourself having to leap from disappearing ledge to disappearing ledge. Fail, and enjoy the bitterness that wells up inside of you because you have to start over.

The sword and its point of view can save you in these moments of crisis. It also probably makes dandy julienne fries.

Sure, there is a quest you have to perform to even get the sword, and the sword inexplicably uses up a weapon slot and requires ammunition. But once you equip the sword, it's hard to care about the long quest or the need for ammo — unless you're out of said ammo.

As great as the sword is, I wouldn't recommend using it on a single one of the new bosses added to Year Two. Many of them can kill you in a single hit if you get too close. They can also shoot orbs of fire all over the floor, or transport you to a shadow realm and hunt you in the mist. Or, they can force you to carry a football of light from pillar to pillar, before you can even shoot at them.

In Year One, boss fights consisted of doing two things: staying out of the line of fire and shooting the bad guy. Now, the bosses that average players face are just as difficult as the bosses reserved for the much more difficult six-person raids in Year One.

The new difficulty of boss fights sets Destiny apart from every other shooter on the market. You have to plan before going into a fight, and you have to bring friends, or at least general acquaintances.

The same goes for the boss fights that are now scattered across the maps, waiting for you to wander in and receive a missile to the mouth. If no one else is around, you'll spend a lot of time running and dying. But when people do show up, you get that wonderful feeling of being flung together to fight for a greater cause, like Sandra Bullock and Keanu Reeves in Speed. It's all very exciting and romantic, until you see that the name of your savior is "poopshoot15" or "DoraXploredMe2."

To balance the increased difficulty of Destiny, the game has made the really good loot more available. The awful, awful grind of Year One has been completely eradicated, and players can now easily level up by doing nothing more than going on quests, killing bosses and fighting their fellow players in the free-for-all Crucible arena.

Why Won't the Other Team Die?

Year Two has seen some subtle changes to Destiny's player-versus-player (PvP) component, the Crucible. Some guns hit harder, and some older, hard-hitting weapons, like the much beloved shotgun, now hit like a feather.

The most significant change, besides a bevy of attractive new maps, has been the addition of a capture-the-flag–style game mode called Rift. Each team battles over a ball of electricity and attempts to take this object to the other team's gaping chasm of electricity. It appears fun on first glance, but I found the game mode to be extremely unbalanced, with nearly every match featuring a clear winner early on.

The appeal of PvP is in the closer-scoring games, where every kill and assist counts. Stomping the competition, or being stomped by them in turn, just isn't as entertaining.

One of the problems could be the amount of damage players can soak up in Destiny versus other shooter games. A kill in Destiny takes twice as long as a kill in Call of Duty or Battlefield. That makes taking down the lightning-ball carrier a lot more difficult than doing the same to a normal flag carrier.

While the difficulty of killing an opponent unbalances things in a capture-the-flag game mode like Rift, it makes death matches and king-of-the-hill–style game modes much, much more interesting.

As with its player-versus-enemy (PvE) counterpart (the very tough boss battles already mentioned), the difficulty of Destiny's PvP mode forces players to strategize. You can't just shotgun your way to victory in Destiny PvP. You've got to think.

If Call of Duty is all about your reflexes, Battlefield about your equipment and Borderlands about the almighty loot, then Destiny can be boiled down to one thing: strategy. There isn't another shooter you can play with friends that requires the level of coordination that Destiny does (and not just the fleek rhythmic coordination demonstrated in the following video).

The Taken King expansion pack, and the Year Two change it heralds, have transformed Destiny from an interesting oddity in the shooter world into a must-have for FPS fans.