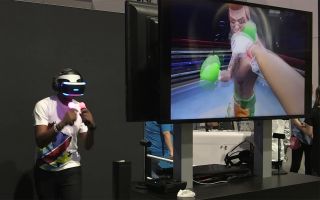 Why watch Michael B. Jordan in Creed when you can box as his character instead?

What you need to know now is that Creed is a heart-racing boxing simulation that lets you step, walk, and jump around in VR. While Creed: Rise to Glory didn’t actually require me to move my legs, that doesn’t mean I didn’t need to.

The game’s fluid balance between punching and blocking is so seamless and fast, it requires full-body participation: arms, back, legs and feet.  I’m sad to report I didn’t have the fight experience to deliver that kind of coordination, so I relied on some pretty basic jabs and blocks to beat my opponent.

And that got the job done, just not all that fast. I made a game out of picking the right moment to pop my challenger in the chin when he taunted me, or bide my time and block his headshots until I could clock him from the right.

Beating him wasn’t easy. To simulate the how boxers tire quickly, your virtual boxing gloves turn red if you throw too many punches. When that happens, your only option is to block and dodge punches, which you can do easily thanks to the motion tracking inside thePlayStation VR’s headset.

But there’s also real-life stamina to worry about, because if you’re throwing punches hack-and-slash style for too long, your IRL self is going to get winded, too. And, still the hits keep coming.

Survios, Creed: Rise to Glory’s team of developers, created an immersive knockout experience that approximates what it feels like to get your clock cleaned. When your sparring rival lands a good punch or a few (depending on whether or not you are me or if you are someone with even the lightest touch of boxing experience), your avatar goes down. Then something rare happens.

At that moment, you see the entire ring, your body on the floor, the ref counting down to your doom, your opponent standing over you Ali-style, and the virtual crowds cheering from their ring-side seats. Your virtual self is having an out-of-body experience, and the only way to get your head back in the game, so to speak, is to move the controllers in a running motion. The faster you “run” with them, the faster you charge back into the fight.

The knockout sequence makes for great motivation to get back in the ring and whack this dude in front you. (And when you do connect your punches, it feels great, just on a fun, emotional level.)

The knockout event is also a nod to the Creed movie. Your avatar is, after all, the Adonis Creed of the Ryan Coogler-directed feature film. And while the game doesn’t include the fights from the movie, there are opponents and bouts that the film’s characters mentioned.

But back to getting your ass knocked out. There’s something in the way Survios choose to handle knockouts that’s rare: they created two distinct avatars for the player.

That’s rare in a VR game.  Protocol is to keep the avatar locked to the player — better to avoid confusion that way, it’s never good to see your own double, right? But, in Creed, there are two avatars during the knockout sequence: a game avatar that serves as your near-unconscious body in the ring and a player avatar that’s your “soul” floating out by the exits, debating whether its time call this match and get some tacos or to charge back into the ring and pick up the gloves.

Creed: Rise to Glory isn’t available for purchase yet, but I think once it is, it’ll motivate you to push past the craving for tacos, grab the Move controllers, and rush back into the ring. That’s what I did, anyway.