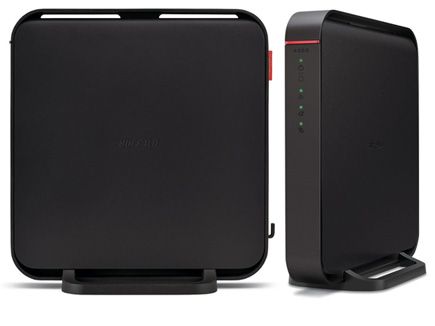 The Buffalo AirStation Extreme N600 is a budget router that exceeds expectations. This $90 dual-band device offers excellent throughput from an impressive distance and a host of applications that extend its capabilities. However, there are some compromises to be made at this price.

The Buffalo AirStation Extreme N600 is a simple, curvy, black brick. There are no external antennas jutting out of the smooth sides of this router. At 7.7 x 7.3 x 1.1 inches, it's slim and unassuming, but its plastic exterior feels a little cheap.

Unfortunately, the Extreme N600's all-black motif extends to the status-light labels, making it virtually impossible to tell what each of the small, green lights represents. Fortunately, the four Ethernet ports and single USB 3.0 port on the back are clearly labeled.

The delicate stand, which seems almost too small to support the router, allows it to sit upright.

A handy setup card comes inserted into the back of the AirStation Extreme N600. It provides users with all the initial settings, including a password — making it one of the few consumer routers preconfigured with a password.

Once a computer is connected to the router via Wi-Fi or Ethernet, a screen pops up and guides you through the painless setup process, which is little more than entering info from the card.

Adjusting additional settings is also quite simple, thanks to a UI designed with smartphone and tablet users in mind. QoS, Web filters and guest accounts are all turned on and off with the click of a button.

Power users can dig deeper by going into Advanced Settings. The number of settings capable of being adjusted is surprisingly robust. Unfortunately, all those extra features aren't clearly labeled. For example, Port Forwarding — a critical feature for gamers — is often listed in a router's Wireless tab. On the Extreme N600,however, the option was under Security, and the page itself was extremely abstruse.

Once the plethora of settings was located and their labels were decoded, we were able to quickly change settings.

Under the Advanced Settings tab is a second tab labeled Applications, which is dedicated to eight applications built into the router.

The bare-bones BitTorrent application seems like a fun feature. Too bad it proved impractical for regular use. We had difficulty adding new files for download, and there were no labels, torrent scheduling or queue control options.

We had similar issues with many of the applications, particularly those that make use of the router's Network Attached Storage (NAS) feature. Besides the aforementioned BitTorrent application,Buffalo includes a QOS app, a very simple Disk Management app (which does little more than put the hard drive into sleep mode) and a Sharing application for accessing the hard drive from other computers.

You'll also find a Web Access application that allows users to access their router away from home and an Eco Mode app for turning the router off when it's not in use. The Network USB app (meant for printing) has a single Enable check box. There's a Media Server app, too, but it pales in comparison to the extremely robust dedicated media servers such as Plex and XBMC.

One program that did perform better than expected was the included Norton ConnectSafe, which will give parents peace of mind. Found on the main Configuration page, ConnectSafe worked exactly as prescribed, limiting access to unsavory sites. Excluding sites or connected computers from ConnectSafe was as easy as a click, and the software refused to take us to dangerous sites such as shady torrent repositories.

The Buffalo N600 has one USB 3.0 port on the back designed for either attaching a printer to the network or a FAT-formatted USB hard drive. The extent of printer management is the aforementioned single Enable check box in the Network USB app.

The Sharing application gave us some trouble in the Tom's Guide offices, whichhave several competing Wi-Fi networks. But when we connected our USB drive to the router in a less-crowded apartment, we had no problem accessing files on Windows or Mac machines.

The Extreme N600 is fairly quick for its price. We tested the throughput of the router using IxChariot and a notebook with an Intel 2x2 802.11 AC wireless card. At 5 feet, 15 feet, 50 feet and 140 feet, the Extreme N600 moved like lightning compared to the similarly priced Belkin N600 DB.

However, the device didn't perform as well on the crowded 2.4-GHz band. Both the Buffalo and the Belkin were extremely susceptible to interference from the myriad 2.4-GHz devices in our office. Phones, printers and even a friendly waving co-worker led to drops in speeds.

The Buffalo squeaked out 13.5Mbps at 140 feet, versus the Belkin's unacceptable 3.2Mbps. Still, that's 5Mbps less than the category average of 18.5Mbps, which includes routers up to $250.

If you're looking for better range on the 2.4GHz band, you'll probably have to step up in price. In the sub-$200 range, only the ASUS RT-N66U could achieve that kind of speed.

For $90, the Buffalo N600 offers solid speeds and long range on the 5-GHz band, plus a wide array of features normally found in routers twice as expensive. The trade-off is that many of those same features feel half-baked, with the exception of the NAS option and Norton ConnectSafe. But if you're looking for a value-priced router that performs, the Buffalo Extreme N600 is a solid option.