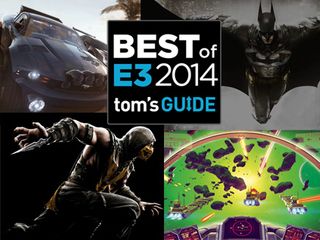 The 2014 Electronic Entertainment Expo (E3) has come to a close, and after half a year with new consoles in the wild, the show's theme was clear: Games, games and more games.

Microsoft brought back "Halo" while showcasing the zany "Sunset Overdrive," Sony boasted a next-gen "Uncharted" and the brutal "Bloodborne," and Nintendo continued to hype "Super Smash Bros." while teasing the future of the "Zelda" series. Third-party blockbusters such as "Destiny" and "Assassin's Creed: Unity" had a huge presence, and sci-fi indie surprise "No Man's Sky" damn near stole the show.

It's hard to pick just a few standout titles from this year's diverse lineup, but here are our absolute favorites from E3 2014.

Gaming is a more inclusive hobby than it's ever been, and yet the medium is still lacking when it comes to badass female protagonists. Enter Abigail "Fetch" Walker in "Infamous: First Light." This stand-alone downloadable content (DLC) for the open-world action game "Infamous Second Son" puts Fetch, formerly a supporting character, into center stage. "First Light" explores Fetch's origins and explains how she transformed from a bitter young woman into a super-powered force of nature. Better still, the DLC does not require a copy of "Second Son" to play, so new fans can dive in and get a taste of the "Infamous" universe without shelling out a full $60. "First Light" could be just what a burgeoning new console generation needs: an uncompromising action game with an uncompromising woman at the helm.

Remember when video games didn't take themselves too seriously? Insomniac Games does, and "Sunset Overdrive" is proof. This Xbox One exclusive throws you into an energy-drink-induced zombie apocalypse in the fictional Sunset City, where you'll be mowing down monsters with ridiculous weapons while stylishly sliding and bouncing around your environment. With seamless multiplayer integration, unforgettable art direction and a much-welcomed sense of humor, this silly shooter is looking like Microsoft's killer app for 2014.

It's been a while since Nintendo's cute characters pulverized each other to a pulp, but "Super Smash Bros. for Wii U" looks like it'll be worth the wait. This frenzied four-player brawler feels tighter than ever on Nintendo's new console, with gorgeous HD graphics that complement the chaos. Nintendo sweetened the pot even further at E3 2014, debuting new characters such as Palutena from "Kid Icarus" and the highly customizable Mii Fighter while showing off compatibility with its upcoming Amiibo toy platform. Now that Pac-Man has joined the fray alongside Mario, Sonic and Mega Man, you can finally prove which classic gaming icon throws the best haymaker.

Bungie practically defined the console first-person shooter with "Halo," and the developer is doing something far more ambitious with "Destiny." This persistent open-world FPS is whatever you want it to be: You can freely explore its vast sci-fi worlds, engage in tense competitive multiplayer or play through its story of a crumbled Earth and the mysterious energy source that hovers above it. Tying all of these elements together is a finely crafted combat system, which blends familiar FPS gameplay with futuristic weapons and eye-popping special moves.

MORE: Destiny: Getting Lost in a Sprawling Shooter World

This category was a tight race between open-world driving romps "Forza Horizon 2" and "The Crew," but the latter title managed to speed ahead, thanks to Ubisoft's breathtaking and highly drivable recreation of the United States. Blending racing and RPG elements, "The Crew" has you work your way up to a Detroit driving gang by completing challenges across a few dozen U.S. cities, each brimming with bystanders and, sometimes, even wildlife. With stunning next-gen vistas, deep car customization and even boss fights, this hybrid racer certainly has our engines revved for 2014.

Get over here! "Mortal Kombat" is back and better than ever. The latest installment to the brutal fighting series, "Mortal Kombat X" moves the popular game firmly into next-generation territory with slick graphics that are both beautiful and visceral. But "MKX" is more than a fresh coat of paint, offering fighting fans evolved movesets that give players three distinct combat styles for each character. It isn't "Mortal Kombat" without the stomach-churning gore, and "MKX" doesn't disappoint. The brawler brings back X-ray vision to show off devastating blows and boasts a series of fatalities you have to see to believe. It's truly a flawless victory.

"No Man's Sky" is such an enormous game that it's hard to believe it came from such a small development team. Developer Hello Games consists of fewer than 10 people, and yet "No Man's Sky" is a game that takes place across an infinite amount of space, with a unique experience awaiting every player who takes part in it. The game is all about exploration, and with that in mind, every character begins on a unique planet somewhere out in space. Where they go from there is up to them. Players can catalog native wildlife, take part in spaceship dogfights or simply set out for the stars and see what's out there in the procedurally generated universe.

It's kill or be potentially eaten in "Evolve," the newest multiplayer shooter from Turtle Rock Studios. It's intense, frantic action in the world of "Evolve," where four-versus-one combat pits four hunters against a hulking behemoth. Broken out into four classes (Assault, Trapper, Support and Medic), the hunters must form a cohesive team to take down a player-controlled monster. The monster's job is simple -- devour surrounding wildlife and evolve to your devastating form. Whether you're the hunter or the hunted, "Evolve" is a thrilling experience.

Wizards, dragons and political intrigue are all old hat for the fantasy genre, but few series make old tropes feel as fresh as "Dragon Age: Inquisition." The third installment in the fan-favorite "Dragon Age" series casts players as warlords who must bring an end to the destructive conflict between the liberated Mages and the overbearing Templars. Along the way, you'll recruit powerful party members, encounter old friends, fight devastating foes, craft legendary equipment and make decisions that shape the outcome of the ongoing story. With deep gameplay, gorgeous graphics and a bigger world to explore than ever before, "Dragon Age: Inquisition" will keep fantasy-RPG aficionados busy for a long time to come.

We've got one word for you: Batmobile. In "Batman: Arkham Knight," gamers finally get behind the wheel of the iconic vehicle to traverse a Gotham City that eclipses the size of the other entries. And what a city it is, full of huge skyscrapers and vibrant neon lights. This latest installment of the "Arkham" series pits the Dark Knight against the fear-inducing Scarecrow and a new villain calling himself the Arkham Knight. Batman will need to employ all his gadgets and cunning to defeat a nemesis who seems to know the crime fighter's most intimate secrets.

MORE: Arkham Knight: A More Brutal Batman Than Ever

Roccat is looking to bring PC gaming into the living room with its hybrid peripheral, the Sova Lapboard. The wireless peripheral combines a mechanical keyboard, palm rest and slidable mouse pad and boasts up to 12 hours of battery life. Roccat has created a device capable of delivering the precision PC gamers expect in a sleek chassis that gamers can use for hours in relative comfort.

Vive la France! Vive la révolution! The "Assassin's Creed" series has never been one to shy away from tumultuous periods in history, and "Assassin's Creed: Unity" will explore one of Europe's most gruesome chapters. Set in 1793 during the chaotic early days of the French Revolution, "Assassin's Creed: Unity" follows Arnaud, a Parisian Assassin attempting to rid France of insidious Templar influence. What sets the game apart both from its predecessors and from other open-world action games is its scope. Thousands of Parisian citizens and soldiers can be on the map at any given time, each acting as an independent AI. Arnaud can engage in open combat, assassinate his foes stealthily, solve murder mysteries or simply parkour all around a painstakingly accurate map of 18th-century Paris. Between its incredibly fluid animation and its satisfying action beats, "Assassin's Creed: Unity" could very well be the best game in the series, if not the best current-gen game on the horizon.