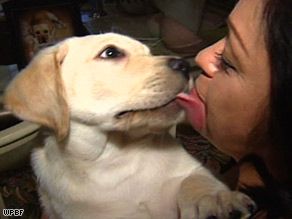 A couple of weeks ago, Greg Strope's dog Oscar spent $63 purchasing 5,000 Microsoft points while he was sleeping. At least, that's what Greg claimed.

Greg and his girlfriend say they went to sleep at around 11 p.m. At 11:40 p.m., Greg's phone buzzed, indicating that he had received an email. Assuming it was spam, Strope ignored his phone until the next morning.

When Greg did check his phone the next morning, he had an email from Microsoft confirming his purchase of 5,000 Microsoft points. With no one else in the house and a half chewed controller to throw weight behind his theory, Greg and his girlfriend Christina arrived at the conclusion that Oscar was the culprit.

However, the most surprising part of the story is not the fact that the Xbox was actually off when Greg and Christina went to bed, but that Microsoft has refunded the points, despite the fact that the company has a no refund policy on Microsoft points. Not only that but Microsoft is also giving Oscar his own Gamertag (Oscar The K9) for good measure. A PR rep for the company said they were doing it so Oscar doesn't feel left out anymore. Aw, cute!