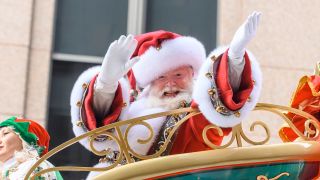 We've got our eyes on each and every Santa Tracker, to help you find the whereabouts of ol' St. Nick.

And while we can't say we've actually seen Santa — the one and only thicc-est present delivery man keeps evading cameras — we've got links to all of the major Santa Trackers for 2019. Because just like Santa, we can't rely on the tools of the past (his elves can't make iPads, so I wonder how he gets them to and from the North Pole).

Older audiences know that Norad is the traditional outlet for Santa's location, and it features an immersive tracker that you can interact with as well. Just remember it's just a CGI rendering — not actual video footage of Santa.

The king of Santa trackers, the North American Aerospace Defense Command (NORAD), has our favorite option. That's because you can rotate its flying Santa, as well as zoom in and out.

NORAD also provides details of Santa's last known whereabouts, as well as the city he's headed to next (with an ETA of when he gets there). We don't know how NORAD gets its Santa Tracker data, but we are impressed.

Check out the NORAD Santa Tracker.

Right now, as I write this, I've seen that Google's Santa Tracker is claiming the middle management master of Elves is headed to Bulgaria, and that he's dropped off more than 4 million gifts. NORAD, which is my pick, claims Santa's delivered 3+ million gifts and is on his way to Zambia.

Google's Santa Tracker has a cutesy live feed of Santa-related animations, but those don't match up with the actual locations that Google's suggesting.

Check out the Google Santa Tracker.

Looking for a way to track Santa on the go? Google turned its own Santa Tracker into an Android app (Google Play Store). It comes with mini games, a Santa tracker and a way to message Santa's workshop. Or maybe these messages go straight to his phone. We hope Santa doesn't read his texts while he's navigating those reindeer.

iPhones don't have a similar app from a well known platform, but Where is Santa Claus? has a rating of 3.4 out 5 stars, with 302 Ratings. Apple's also promoted PNP: Portable North Pole, which lets kids get a personalized greeting from Santa.

USA Today and NORAD have partnered for a live stream of Santa's location that you can throw on the TV. Just download the YouTube app using one of the links below, and search "Follow Santa's sleigh with NORAD's Santa Tracker (LIVE)" to find the above video.