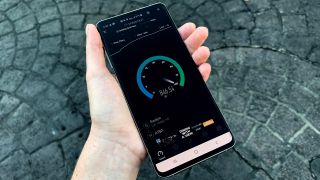 If you live in the United States and you own a Samsung, chances are that you are enjoying much better download speeds than people using iPhones. That’s one of the findings from independent network analysis firm Opensignal.

According to the company’s latest report — published this month under the title “How the smartphone affects mobile network experience” — Samsung users in the United States “experience download speeds 8.2 Mbps faster than iPhone users” on average. In Norway, if you have a Galaxy you will enjoy a whooping 14 Mbps advantage over iPhone users and 12 Mbps more than Huawei users.

In total, Opensignal found that Samsung had faster download speeds in 35% of the 40 countries analyzed. Apple bested the rest of the manufacturers in 17.5% of the countries, including Taiwan and United Arab Emirates. The remaining 48% countries didn’t have a clear winner although “Huawei users,” the firm says, “were joint-fastest in seven countries.”

Globally, the latest Samsung top flagships experienced faster speeds than Apple and Huawei’s — the average download speeds clock at 26.6 Mbps, 25.1 Mbps, and 24.4 Mbps respectively. But if you go for the mid-range, Opensignal claims that Apple wins that race, while the low-end is dominated by Huawei smartphones.

The company also found differences in latency, which measures the responsiveness of the mobile network and can deliver a smoother experience when playing multiplayer games like Fortnite. High-tier smartphones were 14% faster than mid-tier phones and 18% faster than lower-tier phones.

Opensignal claims that it analyzes the status of mobile networks worldwide based on real user experiences on 18,000 unique smartphone models from hundreds of smartphone manufacturers. The company measures factors like download speed and latency, gathering and analyzing that data to help operators on their network optimization strategies. In the presentation of this research results, the company says that, because the latest flagships have the best network technologies, they are “a leading indicator of what the mobile experience will be in the future.”

The analysis firm says that several things can affect the user experience. The mobile network is one of them but especially it is the technologies inside of each handset, from the number of frequency bands you can connect to, carrier aggregation abilities connecting to more than one radio band at the same time, modulation type and use of multiple simultaneous antennas, and the modem supplier.

With 5G networks now being deployed and Apple not expected to launch a 5G phone until 2020, the company risks falling further behind Samsung over the next year.