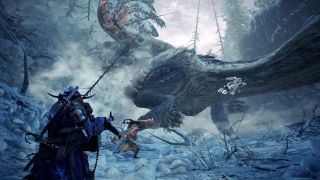 SEATTLE – If you’ve played a Monster Hunter game before, you should have a good idea how the formula goes. Accept a quest, track a monster, engage in a knock-down, drag-out battle with a gigantic horrific beast, strip it for parts, create some new gear and then do it all over again. Now, the Monster Hunter World: Iceborne expansion will bring a whole new region to explore in Monster Hunter World, as well as a new mechanic: mounting the monsters and hacking away at them from the top.

I went hands-on with Monster Hunter World: Iceborne at PAX West 2019, and while the new mechanics require some precision to use properly, they can be immensely satisfying. The game’s new icy environs are gorgeous, and introduce some clever terrain effects, while the creatures themselves are suitably massive, and can create some fascinating emergent gameplay when you encounter more than one at a time.

My demo began in a small camp, where I teamed up with three other adventurers in order to slay a creature known as a banbaro. Here, I had an opportunity to check my inventory, as well as select the type of weapon I wanted to use for the quest. There were plenty of options, including a standard sword and shield and a quick set of twin blades. But I eventually opted for a heavy greatsword: slow and ponderous, but easy to create combos and dish out lots of damage.

From there, we started tracking the banbaro through the snowy woods. The first thing I noticed was that the mountainous environment wasn’t just for show; weather and terrain can make or break a hunt. Deep snowdrifts impede movement and make sprinting impossible; hot springs can keep you warm and restore your health; hot drinks in your inventory up your body temperature and make it easier to move and fight.

The snow also makes it relatively easy to track your prey, especially with the help of tiny insects called scoutflies, which create glowing clouds above monster footprints. Once you track enough footprints and other signs of monster activity, you’ll start to narrow down where the monster could be hiding. All that’s left at that point is to bring it down.

All four of us spread out to find footprints, then tracked the monster to a small overlook at the edge of a snow-covered meadow. We set up traps and lured the banbaro toward us, then the fight was on. The creature, which resembled a cross between a reindeer and a dinosaur, pummeled us with its antlers and stomped us with its feet, while we attacked different parts of its body and hit it for extra damage whenever it fell down.

This is also where I got a chance to play with the clutch claw: arguably the most interesting addition in Iceborne’s arsenal. During battle, you can enter an aiming mode and fire a grappling hook at a monster. If you hit a shoulder, you can cling on for a few seconds and damage a vulnerable spot; if you hit its back, you can mount the monster and attack the head directly. After a few seconds, the monster will buck you off, but it’s a worthwhile (and fun) tradeoff for some extra damage and gameplay variety.

It wouldn’t be a Monster Hunter game if your prey simply fought to the death without any regard for its own life, of course. As we continued to gang up on the banbaro, the monster decided to make a break for its nest. We ran after it, occasionally stopping to track footprints again whenever we lost sight of the creature. Since we had a time limit for the mission (30 minutes in this case, although it varies depending on the quest), this was a potentially perilous time. If we lost track of the beast completely, we’d have to start the whole mission again.

However, we found the banbaro again in an unexpected way: It was doing battle with another gigantic monster, this one a serpentine beast called a betodus. We let the two monsters duke it out for a while, then jumped in when it looked like the banbaro was getting weaker. This was a thrilling encounter, as we had to walk a fine line between attacking the banbaro without putting ourselves in the crosshairs of the betodus. This kind of emergent gameplay seems common in Iceborne, and it lends and organic, unpredictable element to the proceedings.

My only issue during this hunt was admittedly a fairly major one. The camera was sometimes simply atrocious, getting stuck between the banbaro and some competing piece of scenery. Sometimes, I couldn’t see either the monster or my character; other times, my hunter seemed to be striking empty air, even though the banbaro was right on top of me. It’s a frustrating issue, particularly since there are so many trees and rocky outcroppings on which the camera can get stuck.

While it’s hard to judge a whole expansion from one short mission, Iceborne seems to deliver more of what fans loved about the original Monster Hunter World. The new mechanics feel satisfying, and the new monsters are fun to fight.