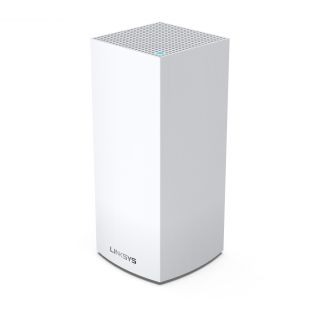 Linksys' excellent Velop mesh router has gotten a serious upgrade with the announcement of the new Linksys Velop WiFi 6: a mesh router that combines whole-home wireless coverage with the faster speeds and improved range of Wi-Fi 6.

The Velop WiFi 6 is the product of Belkin International, which includes the Linksys brand and recently acquired Foxconn Interconnect Technology. Taking advantage of this technology, the device leverages the company's best wireless networking protocols for faster, smarter coverage that reaches every corner of the house.

Priced at $699 for a two-pack, the Velop WiFi 6 may sound pricey – that's more than double the original asking price for the Wi-Fi 5 version – but it's not out of line when compared to other recently announced Wi-Fi 6 mesh systems. Between the Velop WiFi 6's performance claims and feature set, this new gadget may be in the running for the best mesh router of the year.

The outward design of the Velop keeps the familiar white, rectangular design of older models, but adds a host of performance improvements, thanks to its inclusion of Wi-Fi 6, formerly known as 802.11ax. The new standard is designed to deliver faster data transfer to multiple devices, with enough coverage and bandwidth to handle the needs of the modern user. Smart home devices, 4K streaming, online gaming and a household full of smartphones, laptops and tablets will all be better supported. With tri-band connectivity and with speeds up to 5.3 Gbps, the whole family can theoretically be online without slowing down, even when using data-heavy apps and services.

Each Velop node offers up to 3,000 square feet of wireless coverage, making the two-pack system offered today a perfect solution for homes up to 6,000 square feet, and should even cover a backyard. For even larger homes, the Velop system can expand with additional nodes, which users can buy individually.

Beyond the faster performance and wider coverage, Linksys has also outfitted the Velop WiFi 6 with some great features. The primary node is outfitted with four Gigabit Ethernet ports: a welcome feature when you consider how many recently announced mesh routers are Wi-Fi-only, such as the Google Nest Wi-Fi.

The accompanying Linksys App walks you through setting up the mesh system, then offers management and monitoring tools for day-to-day use. Parental Controls, guest network access and device prioritization features give you plenty of control over your home network, even when you're not at home.

The Linksys Velop WiFi 6 is available to buy now as a two-pack through Best Buy and Amazon, with a retail price of $699.

A standalone single unit is also available for pre-order on Amazon for $399, which can connect with other Velop WiFi 6 units to expand coverage to an even larger area. The individual units will be hitting the market on November 11th.