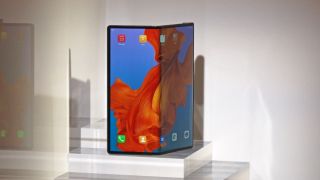 Another foldable phone, another delayed launch.

Huawei was aiming to release its foldable Mate X by September, a delay from the original June launch date for the device. But TechRadar reports that the Mate X faces a new delay, with "no possibility of a September launch date."

That comes after the tech site attended a press event at Huawei's headquarters in Shenzhen, China. TechRadar doesn't say why the Mate X is facing another delay, only that the phone is unlikely to come out before November. Huawei does say that the Mate X will launch at some point in 2019.

Huawei pushed back the launch date of the Mate X a few months ago to do more testing on the foldable phone. The Chinese phone maker wanted to avoid the same problems that Samsung ran into with the Galaxy Fold.

That Samsung phone was set to ship in April, but reviewers who got access to early versions of the foldable phone discovered problems with its screen. Samsung postponed the launch to work out those issues, and now it expects the Galaxy Fold to ship in September.

At the time of the Mate X's first delay, a Huawei spokesperson told CNBC that the company didn't want to "launch a product to destroy our reputation." Huawei planned to use the delay to keep testing and refining the Mate X.

Apparently, that's led to some changes, as TechRadar reports that Huawei has refined the "Falcon hinge" that causes the phone's two screens to flip together to form an 8-inch tablet. The Mate X also gets a slimmer lock button than before, and it will lay flush when the phone is laid down flat. The Mate X's back will still be steel, though, after Huawei tested an aluminum alternative.

Looking past the initial Mate X launch, Huawei hinted that a future version of the Mate X could feature more screens. The phone maker would pull this off by swapping out the rear cover with useable displays.

That's certainly something to look forward to, but for now, most phone shoppers would be content to see one of the promised foldable phones — any foldable phone — actually ship.