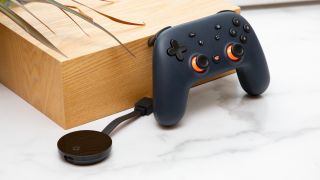 Not only are critics piling up on Google Stadia following a botched launch, but now we are discovering that there are serious overheating issues on the Chromecast Ultra — one of the gaming service's main platforms.

The bad news comes after a piece of good news: Google Stadia founders are at last getting their access codes after two days. This is the official word from Google Stadia's Twitter account.

Here’s the latest update: If you ordered and paid for Founder’s Edition, you should now have your Stadia access code.Pre-orders and access codes for Premiere Edition will start shipping early next week. Thanks for sticking with us!November 22, 2019

That’s one good step forward. However, Android Police’s Corbin Davenport reports that, while many users are praising how hot the service looks, others are complaining about how hot it makes their Chromecast Ultra. So two steps back.

Some users are claiming that, after playing for 20 minutes, they found the compact device “burning hot.” More importantly, other people are reporting full-on crashes.

Have to say.. Stadia just works really well so far. Looks way better on my TV than on my desktop/laptop browser. No lag, no fragments. That Chromecast Ultra gets crazy hot though..November 21, 2019

There’s no known reason explaining why the Chromecast is overheating so much that it will shut off on itself. In theory, you are just streaming video to the device using a phone, tablet, or computer. There’s zero graphics processing inside the device with the exception of decoding compressed video — just like it does with Netflix or HBO or any other video service you'd use on it.

In any case, the overheating and sudden shutdowns sound like a big quality assurance oversight. This issue is especially concerning considering that Chromecast Ultra is one of the few platforms that currently supports Stadia in addition to web browsers and Pixel phones. Hopefully Google can iron out these issues before Stadia launches more widely in 2020.