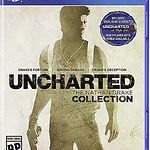 When it comes to globetrotting adventure, no one does it like Nathan Drake, the hero of the Sony-exclusive Uncharted series. Over the years, Drake has traveled to the lush jungles of the Amazon River, the snow-capped mountains of Tibet and the shifting sands of the Rub' al Khali desert. In Uncharted: The Nathan Drake Collection, the treasure hunter will travel somewhere he's never been: the PlayStation 4.

Sony announced Uncharted: The Nathan Drake Collection on the official PlayStation Blog, and shared that its release date will be Oct 9. The price is still up in the air, but $60 seems like a reasonable bet. The collection bundles the first three Uncharted games from the PS3: Uncharted: Drake's Fortune, Uncharted 2: Among Thieves and Uncharted 3: Drake's Deception. The surprisingly good Uncharted: Golden Abyss for the Vita is, unfortunately, not included.

Like other current-gen remasters (The Last of Us, Sleeping Dogs, Dark Souls II, etc.) The Nathan Drake Collection will not radically reinvent the original games. Instead, it will use the PS4's more powerful graphics card and processor to render the games in full 1080p at 60 frames per second. There will be a few new extras, like a photo mode, which lets users share pretty screenshots, and new trophies to earn, but it sounds like if you've played the games already, you should know exactly what to expect.

Pre-ordering the game also confers a few benefits: the Nathan Drake Pack, which gives you special skins and weapons for both single- and multiplayer games, and a PS4 theme (if you pre-order the digital version rather than the physical one).

The Nathan Drake Collection might not be a must-have for anyone who experienced Nathan Drake's adventures on PS3, but for those who never owned Sony's last console, it sounds like a solid investment. The Uncharted series is a fixture of modern gaming, and that generally doesn't happen without a few incredible games under your belt.