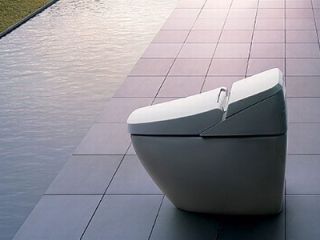 Japan offers a wide variety of cultural excitement for tourists and locals but you definitely wouldn't expect to see something like the Inax Museums back in the states. Located in Tokoname, outside of Nagoya, visitors of the Inax Live Museum can see the most innovative, fancy and funky functional toilets out there.

Here we have Inax's luxurious Regio toilet with an automatic lid, illuminated bowl, and the best part: its own soundtrack composed by famous Japanese jazz pianist Yoshiko Kishino. In addition, the toilet releases its own germ-killing ions to keep this expensive piece of porcelain clean. How expensive is the Regio? Well the cheapest one has a suggested retail price of 462,000 yen (that's $5,500).

Don't let the design of this one fool you, you won't be washing your hands with dirty recycled toilet water. This common water-conservation feature, referred to as spigots, reuses water from the sink for toilet flushing. Now all of that water you waste washing your hands and brushing your teeth can be used to flush the toilet.

Another expensive toilet, the Toto Neorest Hybrid features a tankless design that conserves water by using three different flush buttons. One of the buttons using a water-saving 1 gallon flush. In addition to its water conserving powers, the Neorest Hybrid includes the company's famous bidet system, an innovative cyclone flushing system, automatic flush and deodorizer, nightlight and of course a state of the art Kenwood sound system. This fancy flusher starts at around $2,800.

For a look at more creative toilet designs from Japan, head on over to CNET's article here.