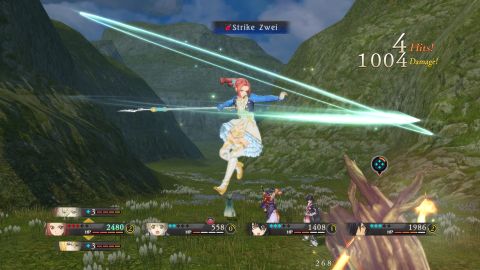 While Tales of Berseria isn't quite as good as the series gets, once this game gets its daemonic claws into you, it's hard to put down.

Imagine the following scenario: It's Friday night. You're beat from a long week at work, and the fridge is empty. Are you going to schlep to the grocery store, buy a thousand ingredients and prepare yourself a steak dinner with an additional stop at the wine store for a perfect pairing? Or are you going to use the last vestiges of your willpower to drag yourself off the couch and into the bar around the corner for a burger and a beer?

If you'd take the latter option, you'll probably like Tales of Berseria ($60, PS4; $50, Steam). This Japanese role-playing game is pure comfort food, but as any weary worker can attest, comfort food is sometimes worth all the fancy fixings in the world. If you want a sweeping story about a group of quirky, attractive young people saving the world through the power of friendship, you've come to the right place.

And yet, familiarity isn't the only thing Tales of Berseria has going for it. The battle system is fast-paced and fun, the story is much darker and more unpredictable than usual, and the improved graphics make a tangible difference for gameplay. While Tales of Berseria isn't quite as good as the series gets, once this game gets its daemonic claws into you, it's hard to put down.

Tales of Berseria stars Velvet Crowe, a young woman out for revenge against her conniving brother-in-law. Through a complicated series of events, Velvet loses her left arm and gains a daemonic one in its place. Armed with the powers of darkness and a party full of like-minded misfits, Velvet has a lot of exploration, combat and party management between her and her goal.

As with most Japanese role-playing games, you'll split your time fairly evenly among exploring the world, engaging enemies in battle, and improving your characters' stats and equipment. There's not too much to say about exploration. Velvet and her crew explore the standard array of towns, fields and dungeons. The world feels sufficiently big and packed with stuff to collect, from money to healing items to side-quest doodads that give you cosmetic items.

Character management is also fairly straightforward. As you defeat enemies and gain experience, your characters will level up, improving their stats and adding new techniques to their arsenals. You can also acquire passive abilities if you keep weapons and armor equipped for long enough. Tales of Zestiria (the previous installment in the Tales series) used a similar system, but this mechanic is much less central to Berseria's gameplay, and as a result, feels more like a bonus than a chore.

The battle system is where things get interesting, for both new and returning fans. Even players with a passing interest in the Tales series probably know that it has real-time combat that lets characters move freely around the battlefield, unlike what happens in traditional, turn-based JRPGs. Running between enemies, landing strikes, building combos and letting your three AI-controlled party members back you up are all familiar, but the overall flow of battle feels new.

Unlike in previous Tales games, characters in Berseria have no default "attack" command. Instead, they can create four distinct sets of combos, choosing from among various Artes. These techniques range from high kicks to destructive spells. While there's no limit to how many times you can use magical techniques, they do take much longer to cast than their physical counterparts. Some attacks are devastating for human foes, while other attacks take special aim at beasts.

Add in attacks based on height, area of effect and combo-building potential, and the battle system has plenty of flexibility, although you don't need meticulously crafted combos to succeed, at least on lower-difficulty levels. The Tales series has never been particularly punishing, but it's hard to really mess up in Berseria as long as you keep a few healing items on hand.

Velvet's daemonic arm adds an additional wrinkle to combat, and it's a welcome one. Rather than just attack and defend indefinitely, characters can possess anywhere from one to five "souls" that represent the character's stamina. When Velvet activates her arm's special powers, she can sacrifice a soul to gain bonuses from enemies, such as better defense or faster movement speed, in addition to a powerful special attack.

Defeating enemies confers additional souls, so souls are pretty easy to manage in ordinary battles. Boss battles, on the other hand, become a delicate balancing act: Will you risk Velvet's survivability for a burst of power, or play the long game? Combined with the fast-paced battle system, these split-second decisions help make Tales of Berseria compulsively playable, even though the gameplay doesn't change significantly from your first battle to your last.

Years ago, Velvet lost her sister, Celica, when daemons attacked the siblings' town. After that, Velvet picked up the pieces along with her younger brother, Laphicet, and Celica's husband, Artorius, and carved out a comfortable rural life for herself — or so she thought. Artorius betrays her and murders Laphicet in order to appease the daemon hordes, then throws Velvet, now possessed by a daemon in her left arm, in prison, where she stays for the following three years.

What happens next takes a little bit from "The Count of Monte Cristo" and a little bit from other Tales games. A much more sinister Velvet escapes from prison and recruits a ragtag band of daemons, spirits, witches and outcasts, all of whom have their own vendettas against Artorius, who has since become one of the most powerful men in the land of Midgand.

The offbeat characters are easily the best part of the game. From the friendly samurai Rokurou, to the conflicted knight Eleanor, to the zany witch Magilou (whose costume seems to exist as an "I dare you" to cosplayers everywhere), every party member has something to add to the story. Better still, rather than consisting of the traditional Tales mix of fresh-faced do-gooders, every party member this time around has a dark agenda and relatively few moral scruples. As such, everything from theft to assassination is on the table, and seeing each character balance a desire to do good with a resignation to doing what must be done creates some fascinating drama, both internal and interpersonal.

The ultimate arc of Tales of Berseria isn't radically different from that of the games that preceded it. However, players haven't really had the chance to view this story through the lens of some morally complicated protagonists before now.

It's also worth pointing out that Velvet is the first female protagonist in the series (not counting Milla from Tales of Xillia, who was only one of two possible choices). She's a well-rounded character with a believable story arc. This is good, but not terribly surprising, since the Tales series has had lots of great female party members over the years. It's nice to see one finally take center stage, though.

Tales of Berseria is not the first Tales game on the PS4, but it is the first one designed to take full advantage of more powerful PS4 and PC hardware. The game runs at a full 1080p and 60 frames per second, and that makes a big difference, especially during battle. There's never any sort of slowdown, and seeing all of the characters perform complex, particle-effects-laden acrobatics dozens of times in each fight never gets old.

Beyond that, the graphics aren't terribly different from those in the games that preceded this one. Tales of Berseria uses a cel-shaded, anime-inspired aesthetic with a robust color palette and extremely memorable character designs. Some of the costumes (like Magilou's and Velvet's) are simply ridiculous, but I'm not liable to forget them anytime soon; others, like Rokurou's and Eleanor's outfits, are elegant and cool.

The music is standard Tales fare, meaning that it's perfectly pleasant in the moment and not too memorable afterward. The voice acting, though, is a treat, as usual. Cristina Valenzuela as Velvet displays an impressive range, portraying both a cheerful villager at the beginning and a scarred killer out for revenge later on. Erica Lindbeck as Magilou is also a standout. I would hazard that her unpredictable demeanor and off-kilter sense of humor will make her the breakout character of this particular installment.

Tales of Zestiria wasn't bad, per se, but it did leave me feeling bored. I worried that the series was becoming stale, content to deliver the same thing over and over without any real innovation. While calling Tales of Berseria "inventive" might be a stretch, it's fair to say the game is polished and fun, and takes quite a few risks with a well-worn formula. It's exactly what a new Tales game should be.

Whereas a game like Final Fantasy XV succeeded by shaking up a formula and giving fans something totally new, that approach would have felt out of place in the Tales series. What gamers got instead is perhaps not as memorable as FFXV, but it's exactly what JRPG fans need every once in awhile. Tales of Berseria may just be pub grub on the grand smorgasbord of gaming, but the beautiful thing about pub grub is that you'll always come back for seconds.