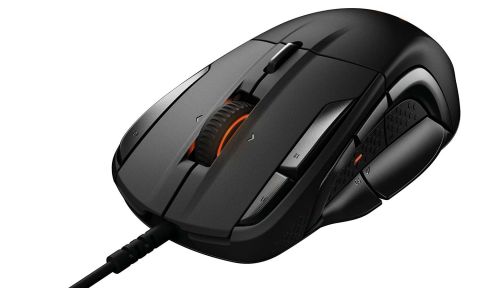 The SteelSeries Rival 500 is a comfortable, functional mouse with lots of customization potential and a reasonable price for all it offers.

Having more or less perfected the gaming mouse for the home user, peripheral companies have set their sights on the next great frontier: eSports. The SteelSeries Rival 500 ($80) has adopted the kitchen sink approach to mouse design, with a plethora of buttons, bells and whistles aimed at competitive gamers. Although the Rival 500 can feel cumbersome and overdesigned, it’s still a comfortable, functional mouse with lots of customization potential and a reasonable price for those looking to break into the tournament scene.

The Rival 500 is one of the bigger mice I’ve used lately. At 4.7 x 3.1 x 1.7 inches, the peripheral is definitely best-suited to folks with large hands, or those who don’t mind stretching their fingers. The sheer abundance of buttons lends itself to a claw grip, but the mouse’s body is broad and flat enough for a palm grip as well.

One unique feature of the mouse is that you can adjust a slider on the bottom of the device to turn two buttons that sit below the thumb into a thumb rest instead. For players who simply don’t need 14 buttons, this is a terrific idea. The rubbery, impromptu thumb rest has a lot of give, and makes an excellent cushion. On the other hand, if you really need every button you can get your hands on, you can just adjust the slider again, although you do have to learn not to put too much weight on the buttons by accident.

Where the Rival 500 really sets itself apart from the competition is in its sheer number of buttons. It offers a whopping 14 buttons: a left button, a right button, a scroll wheel that clicks three ways, a dots-per-inch (DPI) sensitivity adjuster just underneath, five thumb buttons in a more-or-less radial pattern, two buttons on the left face and one button on the right face.

Outside of a massively multiplayer online (MMO) peripheral, I have never seen this many buttons on a mouse, and it seems remarkably different from its sleek, streamlined eSports competitors, like the Logitech G Pro or the Razer Mamba TE.

I prefer streamlined mice, especially for competitive games, but there is something to be said for having every single useful command (aside from movement) within thumb’s reach.

The Rival 500 runs on the SteelSeries Engine 3 software, which is one of the better gaming tools on the market. Users can program each button, set up profiles for various games, link profiles with software, adjust the RGB illumination, tweak the DPI (which goes from 100 to 16,000) and adjust other various and sundry mouse settings. If you have other SteelSeries products, you can run them all from the same piece of software, which is a huge boon.

On the other hand, the Rival 500 has one fairly major drawback: While it’s phenomenally easy to sync up profiles and software (even through the cloud), the mouse has no onboard profiles. In a mouse for home gaming, this wouldn’t make much of a difference, but taking your own settings with you wherever you go can make a huge difference on the tournament scene. You can still store your settings online and download them easily enough, but it’s an extra step in an already stressful situation.

One thing the Rival 500 does that I’ve never seen in another mouse is incorporate tactile feedback. You can program every button to buzz in a variety of circumstances and pulses, like the rumble feature on a controller. I can’t say I found it terribly useful, but programming each thumb button with a different pulse could be a great tool to help you train yourself to tap the right one each time. Furthermore, you can program timers to make the mouse buzz. This could be useful when waiting for in-game skills to reset.

Beyond that, the mouse’s only unusual feature is its ability to turn buttons into a thumb rest, as discussed above. Both the scroll wheel and the palm rest light up, and you can program them with a variety of colors and effects. If you care to 3D print your own bumper for the bottom of the mouse, there’s a slot for it. By default, it says “RIVAL,” but if you’re going to take the mouse on the road, it couldn’t hurt to do a little customization.

The Rival 500 is on par with any of its high-end competitors. I ran the peripheral through Overwatch, StarCraft II: Nova Covert Ops, The Witcher 3: Wild Hunt and Marvel Heroes, and found that it performed admirably in every case.

For Witcher 3 (a role-playing game) and StarCraft II (a real-time strategy game), the plethora of buttons was arguably overkill. I programmed perhaps two or three useful commands, such as opening the map in The Witcher and issuing an attack-move command in StarCraft. Otherwise, I had no trouble navigating around the screen and selecting units or items.

Where the mouse really shone was with Overwatch and Marvel Heroes. Both games are based on a variety of characters with a handful of game-changing skills, and I had more than enough buttons at my disposal to map them. Unlike a dedicated MMO mouse, the Rival 500’s profile lent itself to rapid, jerky movement, and helped me deal with the challenges in both action-packed games, from taking aim at foes as Soldier 76 to dodging enemy fire as Captain America.

The Rival 500 is an atypical take on an eSports gaming mouse, and while it’s most definitely not the mouse for me, I can envision a lot of players for whom it’s just right. It’s got a ton of buttons, but it’s not an MMO mouse; it’s big, but comfortable; it’s flashy, but full of useful features. Best of all, for all that it offers, it’s not even that expensive.

While players who aren’t interested in the tournament scene can probably settle for something simpler than the Rival 500, those who thrive on competition will definitely want to check it out. Some pro gamers will ultimately prefer something a bit more streamlined, but just having the option for something entirely different is helpful. That the Rival 500 is an excellent mouse in its own right only sweetens the deal.