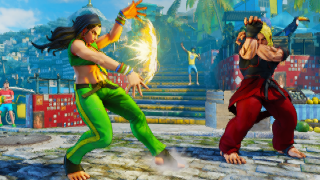 New York Comic-Con is mostly a showcase of cool costumes and expensive merchandise, but at the event's Capcom booth, it felt more like an arcade. Troves of excited fans crowded around the latest build of upcoming PS4 and PC brawler Street Fighter V, which provided a glimpse of the handful of new combatants that Capcom has been steadily hyping up throughout the summer. After getting my hands on the game's latest fighters, I'm happy to say that they're as interesting to play as their explosive trailers suggest.

I spent most of my time with newcomers Laura, a Brazilian Jiu-Jitsu master with a dash of electric powers, and Rashid, a Middle-Eastern fighter that can summon mini-tornadoes. Laura is certainly one of the most unique characters I've played in a Street Fighter game, blending powerful grappling moves with a surprising sense of agility. Her short-range, slow-moving electric fireball has a ton of strategic potential — if it hits, you can follow up with a combo; if the opponent blocks it, they'll be left vulnerable to a throw. I usually stay away from grappler types in fighting games, but I'm already aching to play as Laura again.

The high-flying Rashid might be one of the series' flashiest characters yet, but I was pleasantly surprised to find that his stylish moves are quite easy to pull off. Sporting a wind-summoning jetpack, Rashid can launch swirls of wind at the opponent, leap over them and land on their heads with a diving kick all with a few button taps.

I also got my hands on returning fan-favorite Karin and series staple Zangief. Karin seems like one of the most technical characters on the roster, with special moves that require multiple follow-up inputs to get the most damage. Zangief is as big, Russian and powerful as he's ever been, but a hilariously devastating special move in which his arms rapidly spin like helicopter blades (while his head miraculously stays in place) makes the iconic fighter feel fresh.

Just like during my initial hands-on at E3 2015, the biggest thing that has me itching to play more Street Fighter V is the strategic potential of the game's V-Trigger moves. Available, once your character takes a certain amount of damage, V-Trigger moves can turn a bad match in your favor, but you really have to earn it. For example, Rashid's V-Trigger has him launch a massive tornado toward the opponent, but it's up to you follow up with the proper attacks in order to do big damage or break your enemy's guard.

To get a better idea of what inspired Street Fighter V's gameplay, I spoke to Matt Dahlgren, director of marketing and eSports at Capcom.

"When we looked at creating Street Fighter V, we looked back at all previous iterations and pulled elements from them to give it that 'all of the above feeling,'" said Dahlgren, who described the game as a mixture of Street Fighter II's classic gameplay with some of the more technical elements of the game's Alpha and 3rd Strike iterations.

There are only two characters left to be revealed for Street Fighter V, which will have a starting roster of 16. But don't fret if your favorite fighter doesn't make the initial cut — the game will receive regular content updates post-release, including new characters that can be either bought or unlocked entirely via in-game currency.

Street Fighter V isn't out until spring of 2016, but those who've pre-ordered the title can play it during a second global beta test that kicks off on Oct. 22 for PS4 and Oct. 24 for PC. The beta will have characters Ken, Necalli, Vega, R. Mika, Rashid and Karin available for play, and will mark the first time that players will be able to test cross-platform fights between PS4 and PC. Street Fighter V is shaping up to be an exciting step forward for the storied fighting franchise, and with multiple beta tests planned ahead of the game's final launch, here's to hoping it only gets better.