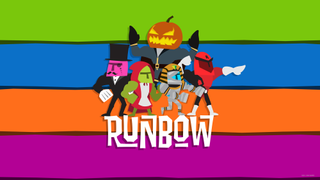 Tackle, uppercut and jump your way to victory, just don't forget: if you can't see it, it doesn't exist. That's the premise behind Runbow for the Nintendo Wii U. At GDC 2015, I got a chance to see first hand what that really means.

Runbow is a 2D action platformer featuring a colorful 60's poster art style, which has up to nine players scrambling across obstacles and other players on the way to the goal. The trick is that the colored platforms and obstacles will periodically disappear from sight as they blend into the stage's background.

This leads to situations where the orange rock you needed to stay out of the water suddenly fades away, leaving you with an empty space and a fall to your death. Things are made even more difficult by fellow players, who can use simple two button commands to get in your way and knock you around.

At Nintendo's eShop Event, Runbow's corner was a tangle or cords, as Wiimotes and Pro Controllers were daisy chained together to reach the nine player capacity. The game is instantly familiar to anyone who has played a 2D Mario game, and the only explanation needed was to hit the taunt button whenever possible to ridicule lesser players with a chicken dance. Stages last just a minute or two as players race to grab the trophy at the end of the level.

Runbow developers 13AM also showed off an asymmetric game mode called ColorMaster. This sees one player outfitted with the Wii U gamepad face off against every other player. That player selects and creates traps for the other runners using the stylus and the gamepad's touchscreen. Every time this lead trap mater player eliminates a runner he or she earns a point, while each runner who successfully makes it to the trophy earns a point for the whole team. There are also other game types such as Bowmaster, Arena, Adventure and even Online play.

The past year has seen a big increase in local multiplayer games with titles such as IDARB, Samurai Gun and more. With nine player support, and simple but addictive party-friendly gameplay, Runbow elevates the fun and madness.

Although pricing has yet to be announced, look for Runbow to hit the Nintendo eShop June 2015.