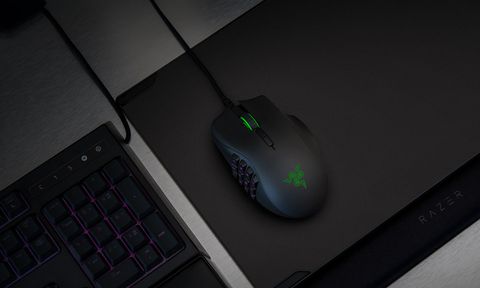 The Razer Naga Trinity, with its versatile, swappable side panels, is just as good for World of Warcraft diehards as it is for productivity-minded users.

I've always been a fan of Razer's MMO-focused Naga mice, even though I've never really used them much after reviewing them. That might change with the Razer Naga Trinity ($100), a best gaming mouse selection that's just as good for World of Warcraft diehards as it is for people looking for everyday productivity.

The only major problem with the Razer Naga (in either its original or hex flavors) was the sheer number of buttons. Having seven (or 12) thumb buttons could be useful in Final Fantasy XIV, sure, but it wasn't so great for The Witcher 3 — or Google Chrome, for that matter. The Naga Trinity solves this problem neatly by offering three distinct side panels: the traditional 12-button layout, the circular hex layout and a simple two-button layout, similar to what you'd find on Razer's popular DeathAdder.

Essentially, Razer is selling you three high-end gaming mice for the price of one. The Naga isn't cheap, but it justifies its high price with tremendous customizability and with part-swapping that couldn't be easier or more intuitive. If you play MMOs but still need a more traditional mouse for FPS, RTS, RPGs or simply getting work done, the Naga is simply the best mouse for the job.

It's hard to ignore the religious implications in the Naga Trinity's name since it, too, comprises three distinct entities in one body. You can swap out the thumb panel at will, thanks to some well-placed and fairly powerful magnets. It takes a minimum of force to pop off the panel, but unless you specifically try to remove it (or accidentally drop the mouse), the Naga's left side isn't going anywhere.

The 12-button layout is the most straightforward of the three; the hex layout has seven buttons surrounding a central, ridged thumb rest; the simple layout has two curved buttons and a large, ridged thumb rest underneath them. All three panels are easy and comfortable to hold, although you've seen them before on other Razer mice.

You can even use the Naga Trinity without a side panel — although you probably shouldn't, because you'll just be resting your thumb on exposed metal.

The swappable side panels simply work beautifully, successfully turning the Naga from a genre-specific one-hit wonder into a versatile powerhouse.

The rest of the mouse resembles previous Naga designs. It's a large, wide mouse with a high profile and a rest for the fourth finger. There's a left button, a right button and a scroll wheel that clicks three ways with two dots-per-inch (DPI) sensitivity-adjustment buttons right beneath that wheel. If you prefer to keep your mouse small and sleek, the Naga probably isn't for you, but if you want as many buttons as possible at the tip of your thumb, the size is a fair trade-off.

The most important — and most distinctive — feature of the Naga Trinity comes in its swappable side panels. However, there's not that much to actually write about them. They simply work beautifully, successfully turning the Naga from a genre-specific one-hit wonder into a versatile powerhouse.

Beyond that, the Naga Trinity works with the Razer Synapse 3 software, which is still in beta, but looking better all the time. With the software, you can reprogram buttons, create profiles for individual games, change the RGB lighting, adjust the DPI (between 100 and 16,000) and tinker with a bunch of other technical settings.

The best word for the Naga Trinity's interface in Synapse is "polished." You can swap out the side panels at any time — not just between games — and the software will instantly recognize which panel is attached. You can reprogram buttons in either list or pictorial form, and open up a set of "Hypershift" buttons to completely change the key map when you hold down a button of your choice. You can also program macros, which is, of course, very useful when dealing with MMOs.

There's one other small feature in the Synapse software, which I never expected to see. But it makes so much sense, I cannot believe I've never seen it before. In the Performance tab, there's a link to open the Mouse Properties menu in Windows. Considering just how much you can customize your mouse with the default Windows options, I'm shocked that Razer appears to be the first company to ever think of integrating this functionality into its own software. The most innovative features are always the ones you didn't know you needed until you see them.

I used the Naga Trinity with World of Warcraft and had excellent results. That's not a surprise, since the last two Nagas were ideal for MMOs as well. Playing as a Pandaren Rogue, it was spectacularly simple to use all of my special abilities, especially once I memorized where each of the 12 buttons sat on the Naga Trinity's side panel. I didn't get far enough in the game to make macros a necessity, but it was nice to know I had that option — as well as the Hypershift, for an alternate skill set.

What surprised me more was just how good the Naga Trinity was at everything else. I used the hex pad for StarCraft: Remastered and SpellForce III, controlling small groups of units with ease. For Life Is Strange, I popped the two-button layout on and just about forgot it was there. The mouse's large, comfortable design helped me get my work done for almost a week while I was away from the office.

The only caveat here is that while you can do a lot to change the mouse's extra buttons, you can't do anything to change its overall profile. As such, if you want a sleek, streamlined mouse primarily for FPS or MOBA play, the Naga Trinity still isn't the right choice for you.

The Naga Trinity is by no means the first of its kind. The Roccat Nyth pulled the same "customizable MMO mouse" trick a few years ago and did an excellent job of it. The Nyth has subtler customization options, as well as the option to swap out the right side of the mouse, depending on what kind of finger support you want. Furthermore, the Nyth comes with a case to hold all its extra parts.

And yet, on the whole, the Naga Trinity is just a little bit more refined. Swapping panels is effortless, the software is easy to control, and the $100 price is reasonable. The Naga Trinity maintains the best aspects of previous Naga mice, while adding a much-needed dose of versatility. For MMO players who aren't absolutely married to the genre, it's hard to imagine a better combination of functionality and customizability.

Unless, of course, Razer makes the Naga Trinity wireless, as it did with the previous Naga. We'll see what the new year brings.