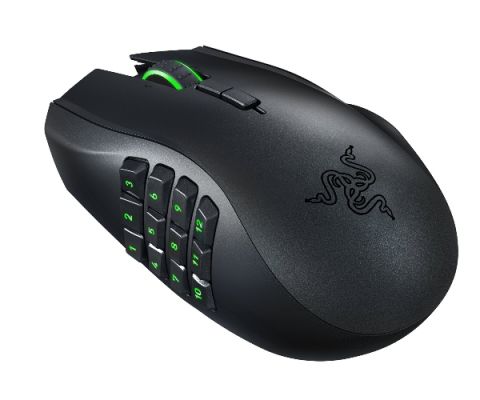 While the Razer Naga Epic Chroma is for MMO diehards only, its lighting, performance and wireless capabilities make it a marvelous mouse.

A new version of a product is supposed to fix a previous version's problems, but the best updates include a feature you never knew you needed. Before I used the Razer Naga Epic Chroma gaming mouse ($130), I expected it to give me the full range of RGB colors promised by the "Chroma" label. What I didn't anticipate is that Razer would also make its best-in-class, massively multiplayer online (MMO) mouse wireless.

While the Naga Epic Chroma is still primarily for MMO diehards, its colorful lighting, incredible performance and perfect wireless capabilities make it one of the best genre-specific mice on the market.

From a physical perspective, not much has changed about the Razer Naga from its wired, monocolored 2014 incarnation. It's still an enormous mouse, usable only with a palm grip, and it features a high profile and a plethora of thumb buttons. The mouse is textured for the outermost two fingers, and the texture makes for a nice touch, but it’s not entirely necessary.

The Naga Epic Chroma is comfortable enough, but its design makes it ideal for high-level MMO play and relatively unsuited for any other genre.

The Naga Epic Chroma possesses a staggering 19 buttons: a right button, a left button, a scroll wheel that clicks three ways, two central buttons and 12 thumb buttons. Entrusting one digit with 12 buttons may sound like a recipe for disaster, but the buttons are actually quite large and feel distinctive. The buttons also employ mechanical switches, which give a satisfying click when you press them.

The major change from the standard Naga mouse to the Naga Epic Chroma is the Chroma's wireless capabilities. I didn't notice a major difference between the feel of the wireless and wired modes, but this could definitely be a useful feature for those who prefer to game in the living room. The dock, which doubles as a wireless receiver, is unremarkable, but it can charge the mouse to have about 20 hours of life.

Although the sheer number of buttons may seem like overkill, everything that's there works just as it's supposed to. If you really do need 12 thumb buttons, plus two more to switch between sets of key bindings, this is one of the few mice on the market that offers those options.

The only new feature the Naga Epic Chroma brings is the ability to adjust color options. (The previous Naga was all green backlighting, all the time.) Players can control color and brightness for both wired and wireless modes, select colors separately for the scroll wheel and the buttons, and even sync up the color options with a compatible Chroma keyboard.

All of the color options work well, but it raises the question of whether this feature makes the Naga Epic Chroma worth a whole $70 more than its predecessor. In my estimation, having a few pretty lights does not elevate the product by leaps and bounds over its earlier counterpart, but the wireless options just might.

By putting "Chroma" in the product's name, Razer has actually buried the best feature somewhat when it comes to this mouse. The Naga Epic Chroma is wireless, and its wireless capabilities worked perfectly in my tests. As long as the mouse had a clear line of sight to the dock, the wireless mode appeared to be just as fast and responsive as the wired mode. The functionality extends about 10 feet, which is about how far the average user sits from his or her TV.

Between great software, attractive color options and strong wireless capabilities, the Naga Epic Chroma delivers something special for MMO fans with a living room TV setup. Otherwise, they're probably best off sticking with the wired model and pocketing the cash.

As the product's design suggests, the Naga Epic Chroma performs extremely well with MMOs. While it doesn't present any significant problems for other genres, if you plunk down $130 for this mouse, you'd better be prepared to spend most of your time with World of Warcraft or a similar title. I tested the mouse with Titanfall, StarCraft II: Heart of the Swarm, Assassin's Creed Unity and Star Wars: The Old Republic.

I have nothing exciting to report about Titanfall, Heart of the Swarm or Assassin's Creed Unity. The mouse was functional with all three titles (and some of the thumb buttons were useful for Heart of the Swarm when I created multiple subgroups within an army), but the Naga Epic Chroma is not the right tool for the job. The mouse’s unusual shape and preponderance of buttons mean that instead of keeping one or two vital skills close at hand, you’ll have to put up with a lot of unnecessary buttons or remap every skill in the game to your thumb.

For MMOs, however, the Naga Epic Chroma is about as good as mice get. When playing through The Old Republic (and World of Warcraft, for good measure), having my most frequently used skills at my fingertips was incredibly handy. I'm not nearly a hardcore enough player to need more than 12 buttons at thumb point, but if you are, you can even shift between keymaps to give yourself access to more than 100 buttons with only a few clicks.

Like its predecessor, the Naga Epic Chroma is ideal for one genre and so-so for others, but Razer purposely designed the mouse this way. Whether that's a good thing or a bad thing will depend on your genre preferences.

The 2014 Naga was my favorite MMO mouse last year, and I foresee that the Naga Epic Chroma will be equally hard to unseat in 2015. While the mouse isn't radically different from its predecessor, it didn't need to be. Between wireless functionality and robust lighting options, the Naga Epic Chroma stands above last year's model, which itself was already at the top of the MMO mouse heap.

As before, gamers who want a mouse for all genres can give this one a miss, as can owners of the previous Naga. If you don't need wireless functions or colorful lighting, you might also consider sticking with the less expensive model. Otherwise, the Naga Epic Chroma is a near-perfect complement to your MMO of choice, and should be for a long time to come.