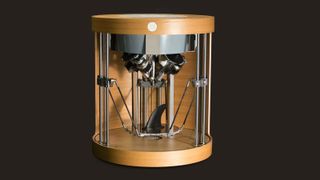 3D printers are taking a long time to find their way into the average household, so printer-maker Pollen is going the other direction -- a luxury device that costs $8,900 and looks like it belongs on the shelf in a Home Depot or a wood shop. This pro printer is called Pam, and it can build with up to four materials at once.

Pollen hasn't listed pricing for its materials, but claims that it offers "the largest range" on the market, including silicon; plastic; a variety of colors; different strength and elasticity options; and material safe for food contact. The materials come in the form of  pellets packaged in pods that fit into the printer.

MORE: The 15 Best Bargains in Tech

Pam uses software called Honeyprint that lets users control the 3D printer from a mobile device. Pollen isn't specific about which phones and tablets support it, instead claiming that it works on "any device, anywhere" (I hope someone tries this on a BlackBerry or Palm Pre).

With such a high introductory price that's only getting more expensive, don't expect to see Pam in your friends' homes or local Maker Faire. This is a pro-level device, and its clearly priced accordingly.