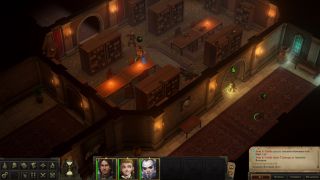 The isometric PC role-playing game has had something of a miraculous comeback recently.

Games like Baldur's Gate: Enhanced Edition, Divinity: Original Sin and Torment: Tides of Numenera remind us of why we fell in love with their endless customizability and engrossing stories. Just a few months ago, Pillars of Eternity II: Deadfire demonstrated that the genre still has new ground to cover, whether the new approaches are as big as traversing the high seas in a pirate ship or as small as giving characters entertaining idle animations.

Pathfinder: Kingmaker ($40) is the latest contender in the world of retro isometric RPGs, and right off the bat, it has a lot going for it. It's the first major adaptation of the massively popular Pathfinder tabletop RPG rules; it's both a role-playing game and a city-management sim;  it's got an enormous map that encourages actual exploration. If you yearn for the days of Icewind Dale and Fallout, this title should be an easy sell, especially since you get about 80 hours of gameplay for $20 less than the price of a new big-budget title. Right?

Sort of. Having sunk a few hours into Pathfinder: Kingmaker, I can say that there are a few things I adore about it and a few things that I expected to be better, given how many strides the genre's made in recent years. Here are a few early observations about the game, which should help you decide whether you've got to pick it up ASAP or leave it for a rainy day.

First off, Pathfinder fans can rest easy. Although the game combines a few skills and streamlines a couple of combat maneuvers here and there, it's pretty much the same riff on Dungeons & Dragons 3.5 that you know and love. When you create your character, you'll choose a race, pick a class, assign attribute points, select feats, invest in skills and all the rest.

Armor class, attack bonuses and saving throws are all calculated the same way in Kingmaker as they are in the tabletop game. It's got prestige classes, magical weapons and noncombat skill checks — plus detailed information about every game mechanic, location, character, god and historical event in the lore.

The Bad: You need to really know your Pathfinder

If you read the last few paragraphs and felt your eyes glaze over, Kingmaker may not be for you. While the game isn't that difficult on the lower settings and you can use premade characters and auto-leveling, neither concession will really help you understand what's going on under the hood.

And if you want to teach yourself how to build or optimize a character, you may as well just pick up a rule book. The game is not really going to tell you that you'll want to invest in Power Attack in order to open up Cleave, or that Dexterity improves armor class, or that it's better to save class-specific feats for higher levels.

(In my defense, I have never played Pathfinder. I vaguely remembered these things from D&D 3.5. You might, too.)

The Good: You can customize difficulty any way you want

Pathfinder: Kingmaker goes out of its way to make sure that the game is accessible. In addition to seven different default settings, which range from Easy to Unfair, you can also tweak every individual gameplay to your liking. You can customize everything from the difficulty of city management to how much damage enemies dish out on a critical hit. The game doesn't lock any content or judge your choices, and you can tweak difficulty settings in the menu at any time. In theory, there's no challenge you can't overcome.

The Bad: You'll still have to micromanage everything

Then again, no amount of difficulty-tweaking will change how much time you'll spend in menus, both in and out of combat. You'll find a ton of equipment, and your characters won't automatically equip any of it.

Should you give the cleric a mace or a quarterstaff? Better check his character sheet to see his weapon proficiencies, specializations and spells. Can he equip heavy armor? Does he have a feat that makes heavy armor more effective than medium armor? You'll have to scroll through a lot of tiny pictures and vague text to find all that out.

This kind of thing works extremely well in a tabletop game, because every player (theoretically) knows his or her characters' needs, abilities, strengths and weaknesses. But it's much harder when you're managing a whole party, particularly in the first few hours, when you'll pick up a new party member with almost every quest. Furthermore, characters won't automatically activate special abilities or fire off spells, meaning that even run-of-the-mill battles can take a while if you want to strategize.

The Good: The soundtrack is amazing

Inon Zur, the Israeli-American musician behind Baldur's Gate II, Icewind Dale II, Dragon Age: Origins, Soulcalibur V and Fallout 4 (and, oddly enough, a bunch of Power Rangers series), composed the music for Pathfinder: Kingmaker. If that information doesn't make some kind of impact, then I can't help you.

The Bad: The graphics are just OK

Isometric RPGs don't need exceptional graphics to function, but Kingmaker's seem a little rote. They're clear and colorful, but spells, locations and characters all lack a certain distinctiveness. Pathfinder: Kingmaker isn't just a generic fantasy RPG, but it looks like one.

The Good: Your party members can work together

In a tabletop RPG, you want a diverse party with as many different skills as possible. This allows adventurers to help each other out and devise clever solutions to obstacles. But somehow, just about every game, from Baldur's Gate to Pillars of Eternity, has whiffed this element on some level. (Your party goes blundering into a trap while your thief tries to disarm it, or every single character has to leap across some perilous chasm instead of just the guy who put points into Athletics.)

Pathfinder: Kingmaker finally, finally lets your party work as a team. Whenever you make a skill check — from Persuasion, to Knowledge, to Trickery — the game will automatically employ the best party member for the job. You won't always succeed, and you don't usually get a chance to try again, but I was fine with that, knowing that my party had a fair chance.

The Bad: Your party members aren't that interesting

It's good that your party members are mechanically sound, because they're boring; after playing for a few hours, I barely remember any of their names. There's the paladin lady who — I am not making this up — is so unbelievably beautiful that she wasn't allowed to be a paladin anymore.

There's the dwarf who's convinced he's always about to die, but not in a funny, over-the-top way. There's the barbarian lady with a comically oversized sword, who sometimes speaks broken English but other times just wants to fight. You've either seen them before or there's a reason why you haven't seen them before.

The way you interact with them is not especially interesting, either. When they first join your party, you can talk to them to get a truly enormous exposition dump, approximately none of which is relevant to the task at hand. I lost interest in every single one of their convoluted backstories before the first conversation was over.

There is one fun party member, though: a halfling bard named Linzi (voiced by the similarly named Lindsay Sheppard), who is also the narrator of the game. Linzi's enthusiasm for the adventure is infectious, and her voice acting is a cut above the rest.

Because "Pathfinder" is literally in the name of the game, it's appropriate that exploring the game's gigantic map is a lot of fun. Between specific locations (towns, dungeons, landmarks, what-have-you), you can wander across the continent of Avistan, complete with little Indiana Jones-style dotted lines.

You can move only along predefined trails, but until you follow said trails, you won't know where they go — or how they intersect with other territories you've explored. Finding more-efficient routes can save you a ton of time, and even dead-ends can hide valuable treasures and exciting encounters.

The Bad: Retracing your steps is tedious

On the other hand, the game would really benefit from some kind of fast-travel system. There's a lot of walking back and forth between distant locations, particularly when it's time to turn in quests. And there's almost always some kind of random encounter along the way.

Sometimes, it's something memorable; usually, it's just another disposable gang of bandits. Backtracking can be fun when you're mapping out new territory, but once you've established the quickest route, it's a lot of watching a dot move across a map.

There are some aspects of the game that I haven't touched on — the city-building, the bugs, the dialogue, the semiopen world — but the first few hours of Pathfinder: Kingmaker are ambitious, unpolished, satisfying, complicated, engrossing and tedious. I like the game, but I'm not sure I'm ready to commit 80 hours of my time to it.

In the meantime, the staff at Owlcat Games is working overtime to iron out a lot of the game's issues, coming out with patches to that effect almost every day. They're taking their creation very seriously — as they should, because it's a game with a lot of heart and an impressive scope. The game won't make you feel like a king just yet, but it's good enough to merit minor nobility, at least.