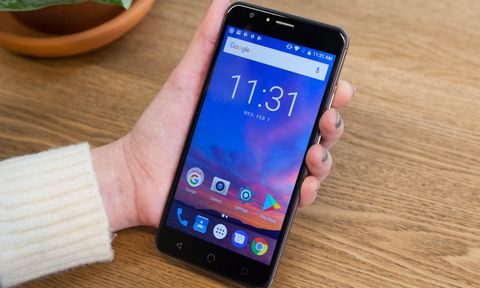 Nuu Mobile's X5 suffers from poor battery life and middling performance. It's affordable, but you can find more high-end features in a more stylish package for the same price.

In 2016, Nuu Mobile's X5 would've been a competitive Android smartphone. It's an unlocked, solidly built device running a version of Android that's pretty close to stock. And at $200, it's an affordable package.

But times have changed. Premium features are winding their way to budget devices more quickly, and $200 phones now include dual-lens cameras, giant batteries and edge-to-edge displays. Some are expected to get Android Oreo sooner rather than later.

That means the X5 feels a little … behind. And now that Nuu Mobile has announced the $200 G3 — an all-glass phone with an edge-to-edge display and a dual-lens camera — purchasing the X5 now is like buying a new iPhone in August when September's iPhones will be better and cost the same as the generation they're replacing.

The Honor 7X, which is a similar size and price, feels far more premium than the X5, thanks to its matte aluminum body and curved glass.

That's not to say the X5 is a bad phone. But you can get more for your $200 than this device offers.

You can order the X5 directly from Nuu Mobile's online store for $199.99. The phone is also available on Amazon. The X5 comes in silver or black, but it's available only with 32GB of storage.

The X5 is unlocked, but it works only with GSM networks, so that limits you to AT&T, T-Mobile and other carriers that use AT&T and T-Mobile's networks. The X5 does not work on Sprint or Verizon.

Nuu Mobile's X5 is a solidly built 6-inch smartphone with an all-metal body and curved 2.5D glass. The full-HD display takes up just 5.5 inches, which means it has thick bezels on the top and bottom that feel outdated now that even affordable phones are embracing edge-to-edge displays. I'm not a fan of this look, especially when the X5's chin is used for back, home and app-switching buttons that could have been built into the display itself.

The X5 sports a fingerprint scanner, which is on the back of the device. Unlike on Samsung's Galaxy S8, the Nuu Mobile X5's sensor is far enough away from the camera to make it easier to unlock your phone without smudging the lens. The sensor also acts as a shutter when you take a selfie.

New budget phones are moving away from plastic and embracing metal, but I found myself wishing that the X5 were a little slimmer, with a more seamless transition from the glass screen to the metal case. Instead, there's an obvious ridge where the two meet. The Honor 7X, which is a similar size and price, feels far more premium than the X5, with its matte aluminum body and curved glass.

The X5 sports a 5.5-inch full-HD (1920 x 1080) LCD panel, which is perfectly serviceable for browsing the web or watching YouTube videos.

The adjustable filters to remove wrinkles and whiten (yes, whiten — this is a problem) your entire face are extremely aggressive.

The display covers 113.6 percent of the sRGB color spectrum, which is right in line with other budget phones. But the X5 falls short when it comes to color accuracy and brightness. The device scored a Delta-E rating of 1.04 (zero is perfect), lagging behind both the Honor 7X and the slightly more expensive Moto G5 Plus.

In my experience watching trailers for Solo: A Star Wars Story and Deadpool 2, the colors were muddier than they were on other budget phones.

Camera: Fine for a budget shooter

The X5's 13-megapixel rear camera and 5-MP selfie lens are comparable to other budget devices' cameras, which lack the back-end processing prowess that can make a decent photo great.

Like the Moto E4 Plus, the X5 has a serviceable main shooter that can handle indoor and outdoor scenes. Tapping on the Settings gear in the Camera preview mode lets you control exposure, adjust white balance and pick a scene that will automatically adjust the settings to what you're shooting (portrait, landscape, night shots, etc.).

Shooting in direct sunlight gets a little dicier — the X5 tends to blow out the sky. That can create some artistic shots, like a Manhattan street scene I captured that looks straight out of a J.J. Abrams movie. (Yes, that was a lens flare joke.)

The 5-MP front-facing lens is just OK. A built-in beauty mode is tempting, but the adjustable filters to remove wrinkles and whiten (yes, whiten — this is a problem) your entire face are extremely aggressive. Even at the lowest settings, you look like a version of you that's made entirely of plastic.

MORE: 11 Cheap Smartphones (Under $200) Ranked From Best to Worst

Where the X5 drags is battery life, which is seriously underwhelming. The smartphone average is 9 hours and 40 minutes, which we test by continuously surfing the web over 4G LTE. The X5's 2,950-mAh battery clocks in at a paltry 7 hours and 3 minutes, which is far behind the Honor 7X (9:21) and Moto E4 Plus (14:48). Both of those phones have much bigger batteries for the same price as the X5.

The X5 does support fast charging, but we tested the phone both with the micro-USB charger that ships in the box and a higher-voltage charger, and neither provided extra juice to the X5. The device charged to 30 percent in 30 minutes and to 60 percent in an hour.

Performance: Not great for gaming

The X5's display doesn't exactly bring games to life; the color accuracy, average brightness and lack of richness make you feel like you're watching a low-res TV. But even with 3GB of RAM and a 1.5-GHz octa-core MediaTek chip, the device struggles to achieve seamless gameplay.

As I swung Thor's hammer at piles of enemies rushing at me in Marvel: Future Fight, the game kept pausing at pivotal moments. Just a fraction of a second was enough to sustain major blows, which is the exact opposite of what you want when fighting for your (or Thor's) life.

We had issues getting 3DMark's Ice Storm Unlimited graphics test to run on our review unit, but the X5's CPU scored a 2,623 on Geekbench 4's test of overall system performance. That's slightly faster than the comparably priced Moto E4 Plus (1,891) but nowhere near as powerful as the Moto G5 Plus (3,746) or the ZTE Blade V8 Pro (3,018). The smartphone average is 3,299.

Lightweight web surfing was easy enough, though Chrome tabs didn't load instantly when we toggled between them.

MORE: The Best Android Phones You Can Buy Right Now

If you're in the market for a $200 phone, there are better options with more features and better battery life for your hard-earned money. Honor's 7X looks like a premium flagship with an edge-to-edge display and dual-lens camera. The Moto E4 Plus has incredible battery life and a decent camera. For an extra $30, you can snag a Moto G5 Plus, a powerful phone that is scheduled to get upgraded to Android Oreo this year. Nuu Mobile's X5 isn't a terrible smartphone, but the competition is steep.