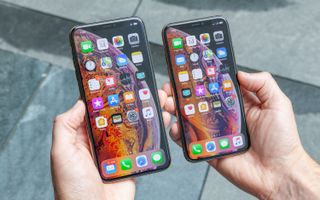 Whenever a new iPhone goes on sale, as the iPhone XS and iPhone XS Max just did, you can hear the same question echoing across the land: Should I upgrade to Apple's new phone?

The question gets more difficult to answer the newer your current phone is, especially because Apple's latest phones start at $999 for the iPhone XS. The promised improvements may make it seem like it's worth shelling out big bucks if you've got  an iPhone that dates to the Obama administration. But weighing the value of features in the newest models becomes more difficult if your current device still has traces of that new-iPhone smell.

Don't worry if you find yourself struggling with an iPhone-upgrade decision. We can help you decide whether the iPhone XS or XS Max is an enhancement over your current iPhone by looking at the biggest improvements you're likely to experience should you make the jump to the latest models.

We'll look at iPhones dating back to the iPhone 5s, the oldest model capable of running Apple's just-released iOS 12. (If your current iPhone is older than that, it really is long past time to consider getting a new phone.)

The biggest differences: There's an improved A12 Bionic processor in the iPhone XS and XS Max that will mean noticeable — though not overwhelming — performance gains over the A11 Bionic in the original iPhone X. The new phones have an improved image sensor, too, and that meant better photos in low light during our testing. If you opt for the larger iPhone XS Max, you'll see a big gain in battery life: The 6.5-inch phone lasted 11 hours 30 minutes on our battery test, versus 10:41 for the iPhone X.

Reasons to stay put: The promised battery-life improvement didn't materialize for the iPhone XS; the new phone actually fared worse on our test than the iPhone X did. Enhancements to the Animoji feature, such as the ability to create emoji that look like you, are part of the iOS 12 update and are available for the older iPhone X as well as the newer models.

Our verdict: Unless you can take advantage of an annual upgrade offer, such as Apple's iPhone Upgrade Program, or you really rely on your phone for taking pictures, you can easily hold on to your iPhone X without suffering too much smartphone envy.

The biggest differences: Besides that modest speed boost over your phone's A11 processor, the iPhone XS Max will tempt you with its 6.5-inch display, which fits in a device not much larger than an iPhone 8 Plus. And that display is an OLED screen, not the LCD panel Apple uses on the iPhone 8 models. You'll see noticeable camera improvements as well, including the ability to adjust depth of focus after you've taken a portrait-mode shot.

Reasons to stay put: If you didn't want to pay $999 for an iPhone X last year, it's hard to justify that same amount 12 months later. The improvement of the OLED screen over LCD panels is undeniable, but you can probably enjoy your iPhone 8 or 8 Plus a bit longer.

Our verdict: Better-quality screens and camera improvements are the main reasons to replace a phone that's been out for only a year.

The biggest differences: The jump in performance from the iPhone 7's A10 Fusion processor to the A11 Bionic was substantial, so expect an even-more-significant gain if you leapfrog to the iPhone XS's A12 Bionic chip. If you're hard on phones, you'll benefit from the dust- and water-resistance rating on the iPhone XS of IP68, an improvement over the IP67 rating on the iPhone 7/7 Plus. Apple says its new phones are more durable, too — something drop tests are bearing out.

Reasons to stay put: Two years used to be the gold standard for upgrading your phone, but if you opted to pay off your iPhone 7 in installments, you're likely only now reaching the end of your commitment. Why not enjoy some time without monthly payments, especially because the processor and cameras on the iPhone 7 models remain perfectly serviceable?

Our verdict: You'll get plenty of bang for your buck if you jump from the iPhone 7 to the XS, including more screen real estate. If you're satisfied with your phone's performance and picture-taking abilities, though, you can hold on for one more upgrade cycle.

The biggest differences: Everything we've already talked about with other models — the faster processor, the sharper screens, the greater storage space — goes double for the iPhones released three years ago. The iPhone 6s and 6s Plus could survive splashes with water, but you couldn't drop them in 3 feet of water like you can with the iPhone XS and XS Max. Also, the 6s was the last iPhone model that didn't let you have two rear lenses, so you'll have a more versatile camera phone should you upgrade.

Reasons to stay put: iOS 12 was designed to make sure older iPhones could still run smoothly, and when we tested the iOS 12 beta, we saw apps launch faster on an iPhone 6s. Your phone won't be as peppy as a new model, but iOS 12 will give your iPhone 6s or 6s Plus a little boost if you're not eager to pay $999 or more on a new phone.

Our Verdict: It comes down to budget. If you're put off by the iPhone XS' price, you can stick with your iPhone 6s and still get some improvements by installing iOS 12. But if you're ready to upgrade, the processor, camera, displays and overall experience should be noticeably better on Apple's latest phones over your 3-year-old device.

The Biggest Differences: The differences in performance (the A12 Bionic on the new iPhones versus the aging A8 CPU that powers the iPhone 6 and 6 Plus), display (OLED versus LCD) and cameras (dual rear lenses versus a lone 8-megapixel shooter) make the iPhone XS and XS Max better than the iPhone 6 models in every way. That remains true even when you account for better performance courtesy of the iOS 12 update.

Reasons to Stay Put: The iPhone 6 update was the first time Apple offered a phone with a screen topping 5 inches. If you opted for the 5.5-inch iPhone 6 Plus way back when, you still have enough screen real estate to not be too envious of the 5.8- and 6.5-inch displays on the XS and XS Max, respectively.

Our Verdict: Upgrade your phone. There's no reason to wait.

The Biggest Difference: Let's save some time here — practically everything about the iPhone has improved over the five years since the 5s debuted.

Reasons to Stay Put: If you appreciate compact phones that fit easily in a pocket, Apple's current lineup doesn't offer much joy, though the 5.7 x 2.8 x 0.3-inch form factor on the 5.8-inch iPhone XS is the more slender of the new models.

Our Verdict: The time has come to embrace a newer phone, even if it's an iPhone 7 or 8 (which are now available at discounted prices from Apple).

The Biggest Difference: The iPhone SE has just one rear camera and the same A10 processor as the iPhone 6s. Not only will the iPhone XS offer improved performance and better cameras, but you'll also see a noticeable jump in battery life if you upgrade.

Reasons to Stay Put: The iPhone SE isn't as ancient as the 5s. In fact, it came out only two years ago. So, fans of phones with smaller form factors and equally small prices may be able to squeeze some extra life out of their iPhones by relying on iOS 12 and its promised performance improvements.

Our Verdict: If you opted for an iPhone SE, it's likely because you're resisting the rising tides of higher phone prices and oversize displays. And if you've held out this long, you might as well wait until early 2019 to see if an iPhone SE successor is in the works. Otherwise, the time to upgrade to a larger iPhone is looming.