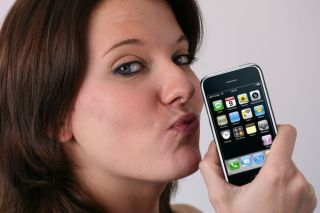 Following Apple's supposed "accidental" reveal of an iPod Touch sporting 3G connectivity via the iTunes website on Wednesday, a trio of non-Apple screenshots surfaced on Thursday claiming to be the iPhone 4S.

Instead of a glass screen and a glass back plate, the new pictures indicate that this version simply uses hard white plastic, thereby falling in-line with previous rumors that Apple plans to offer a lighter, cheaper iPhone 4 model come September.

According to AppleInsider, the device in question is a prototype despite it looking identical to the iPhone 4, as the model number and various identification numbers on the rear of the device are X'ed out. The source behind the images, well-known Vietnamese leakers Tinhte, claim that it runs at a speed that "seems" faster than the current iPhone 4, but failed to provide any specs.

Last week brought rumors that Apple plans to launch a prepaid / lower cost iPhone in late August, possibly the iPhone 3GS which AT&T currently offers for $50 with a new two-year contract. It will also supposedly land on the Sprint and T-Mobile networks here in the States later this year.

The rumors also indicated that Apple may sell the super-cheap iPhone 3GS for the low end price tier, the iPhone 4 for the mid-range price tier, and the iPhone 4S addressing the high-end market. That said, the device seen in Thursday's images sporting a new chassis and a reported speed boost may likely be the rumored iPhone 4S.

So where, then, does that leave the iPhone 5? As CNET points out, introducing two new models within a year will be an Apple first. Released alongside the iPhone 5, this new 4S version would be considered the "lower-cost model" but not necessarily the "dirt cheap, discounted" version – that's where the contract-free iPhone 3GS will come into play.

As always, take everything with a grain of salt until Apple supposedly reveals the new gadgets in September. As it stands now, we're looking at the release of the iPhone 5, the iPhone 4S and the iPod Touch 3G this fall while the current iPhone 4 will be reduced in price and the iPhone 3GS will fall into the pre-paid / contract-free zone (possibly meaning it will become a free phone with a new two-year contract).

Wonder what the Apple rumor mill will bring tomorrow?