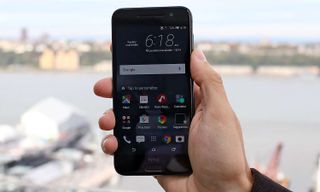 Yes, the HTC One A9 looks pretty much like the iPhone 6. But there's more than just looks to HTC's new flagship phone, which is the first smartphone from outside of Google to run Android Marshmallow. Available for pre-order on October 20 for $399, we went hands-on with the One A9 in an early first look.

While HTC says that the design of its new flagship is actually a continuation of the flat design from the Desire combined with the aluminum construction of the M9, in reality, it looks a heckuva lot like the iPhone 6 and 6s. To be sure, there are a few differences, such as a centered camera and thinner plastic bands, but from a quick glance, it's hard to tell the two apart.

Available in white, black, or red, the One A9's aluminum back and sides are made of a solid piece of aluminum, but like previous HTC phones, the sides have a different finish than the rear. It's subtle, but a nice contrast. I also liked that the power button on the right side had a series of ridges, making it easy to press. On the opposite side of the phone, you'll find slots for a microSIM and a microSD card.

On the front, the A9 has a 5-inch Full HD (1920 x 1080p) AMOLED display that was colorful, but looked a bit dim outdoors. Above the display is HTC's Ultrapixel camera, which previously was used as its rear shooter. Below the screen is a capacitive touch button that's also a fingerprint reader. Unlike past readers, which required you to swipe your digits, you only need to press your finger on the A9's sensor.

What you won't see on the front are the BoomSound speakers that were a trademark of previous HTC flagship phones. Now, just a single speaker rests on the bottom edge of the A9, which HTC says is augmented by a dedicated amp, Dolby Noise Reduction and surround sound, and the ability to both play and upconvert 16-bit audio to 24-bit.

But it's what's inside that counts. Here, though, HTC believes that the Snapdragon 617 octa-core processor, 3GB of RAM and 32GB of storage will suffice, as it says a greater amount of processing is done in the cloud, rather than on smartphones themselves.

The rear camera on the One A9 has fewer megapixels than before — 13MP as opposed to 20MP on the M9 — but HTC says the larger pixels, coupled with optical image stabilization, will result in better nighttime photos. Other camera additions include the ability to manually adjust settings, as well as shoot in RAW format.

HTC also dialed back its Sense overlay. While it still has BlinkFeed and Themes, the One A9 has a much purer Android Marshmallow look, which the company says helps to speed up the phone, both in terms of performance and in getting updates to the operating system.

Packing a 2,150-mAh battery, HTC says the A9 should last about as long as the iPhone 6s, which lasted 7 hours and 46 minutes in our tests. Weighing 5 ounces, the A9 is slightly heavier than the Samsung Galaxy S6 Edge (4.7 ounces), but that device has a lighter glass backside.

The HTC One A9's most direct competition at this point looks to be the Nexus 5X, which starts at $379, has a slightly larger 5.2-inch 1080p display and also runs Marshmallow out of the box. Arguably, the A9's metal body is sleeker than the 5X—and it has a microSD card slot—but the latter has a more powerful Snapdragon 808 processor and a larger 2,700-mAh battery, which lasted 11 hours and 30 minutes on our battery test. But we'll wait to see how well the One A9 performs when we get it into our labs.