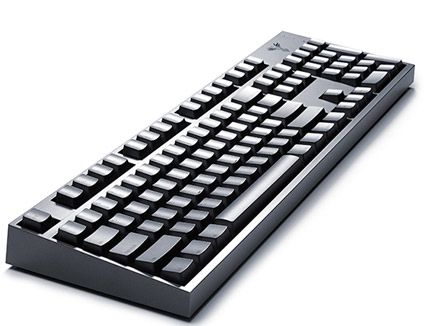 Inspired by the alien monolith in "2001: A Space Odyssey," the Feenix Autore keyboard strives for sleek minimalism and to act as a counterpoint to the myriad of flashier gaming keyboards on the market. But the Autore's minimalism means cutting out "required" gaming keyboard features like macro keys, USB ports and backlighting. Can simple, high-quality design help this $163 keyboard keep up with the more feature-rich competition?

The Feenix Autore is a big attractive slab of aluminum gray. The cool-white lock lights aren't marked, and the Autore eschews keyboard kickstands to instead build a slight rise into the device itself for wrist comfort.

The resulting freed-up space is welcome, but the Autore's minimalist aesthetic carries over to the key labels, which are only a few shades darker than the keyboard itself. We found these labels very difficult to see in normal lighting, and virtually impossible to see in low light.

Even with this reviewer's small hands, typing on the Autore was enjoyable. Its keys are shaped to gently cup the finger, and spaced just far enough apart to mitigate potential mistypes. In the Ten Thumbs Typing test, we scored 59 words per minute (WPM) with a 2-percent error rate on the Autore — an improvement over our average 58 WPM and 3-percent error rate.

There's a solid, but not fatiguing feel to each key press. The Cherry Brown MX switches give the keyboard a measured actuation force of 50 grams and a key travel of 3 millimeters. The Brown switch is a compromise between the quieter and mushier Cherry Red switch and the more tactile and far louder Cherry Blue switch, both of which are found in many comparable keyboards. Our keyboard was louder than similar Cherry Brown keyboards; the keys snapped pleasantly against the base of the keyboard as they "bottomed out," or hit the end of their traveling range.

Like the Feenix Nascent gaming mouse, Feenix's Autore keyboard comes with dedicated software or drivers. The company's decision to go driverless with its peripherals makes a lot of sense in the case of its keyboard, which is so simple it needs no software tweaking. The usability of the keyboard never suffers, and our model worked flawlessly straight out of the box. That includes the Windows key, which can sometimes have issues in a driverless situation.

But when compared against other gaming keyboards at the same price point, the Autore's minimalist aesthetic starts to look merely anemic. This keyboard lacks the macro keys and backlit key of the Corsair K95, or the additional custom key-lighting and built-in media hub found in the Roccat Ryos MK Pro.

One thing the Autore has that some other keyboards lack is a personal support manager for each keyboard. A card included with the keyboard lists the name of the user's support manager, and Feenix promises prompt responses to support queries.

Running the Autore through its gaming paces revealed a perfectly solid keyboard. Strafing diagonally while reloading and jumping was not a problem in "Bioshock: Infinite," and while it took a stretch of the hand to hit every key needed in "Batman: Arkham City," we didn't run into any ghosting problems — when the keyboard fails to register keystrokes as multiple keys are pressed. This was thanks to the devices' excellent key rollover.

Key ghosting can be a real problem on USB keyboards. Feenix helpfully supplies an adapter for PS2 keyboard ports that will eliminate the problem entirely.

Even if gamers can't use PS2 connectors, users won't run into serious problems with the Feenix Autore. Using AquaKeyTest to evaulate key rollover in USB, we found the Autore performed flawlessly with up to six keys pressed simultaneously.

In fact, the Autore's key rollover didn't completely fail until we pressed a whopping eight keys simultaneously. That's more than enough for most gamers — even in a key-heavy game like "Batman: Arkham City."

Outstanding design, personalized support and excellent performance keep the Feenix Autore competitive with more feature-rich gaming keyboards. Unfortunately, its $163 price tag may keep away all but the most minimalist-devoted customers. If aesthetics aren't important to you, then you might want to give this keyboard a pass.