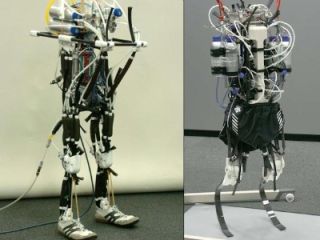 ASIMO may have inspired an entire generation of robots to abandon their tank treads and spider legs in favor of bipedal movement. Despite this engineering evolution, most humanoid robots walk around like babies with overloaded diapers. For young roboticist Ryuma Niiyama, that just won't do. He wants to see machines move just like in the movies. To that end, he's been working on a robot that can jump and sprint just like a human being.

It's called the Athlete. Unlike ASIMO and its ilk, Niiyama's robot runs with a more human stride. The secret is the Athlete's artificial musculoskeletal system, which mimics the muscles in your legs. In fact, the current design closely resembles the legs of the eponymous killer robot from the Terminator films. It makes you wonder if Niiyama is just Japanese for "Skynet."