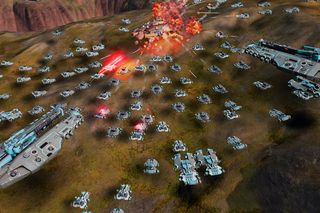 SAN FRANCISCO -- Ten units -- 10 single soldiers or vehicles -- is a skirmish. One hundred units is a battle. Ten thousand units is a war.

Unlike previous real-time strategy (RTS) games that claim to simulate large-scale battles with only hundreds of units, Stardock's Ashes of the Singularity, which we saw in a preview at the Game Developers Conference (GDC) 2015 here, ups the ante with the ability to handle engagements of 10,000 or more combatants.

Instead of focusing on smaller tactical battles among a handful of units, Ashes of the Singularity takes inspiration from earlier titles such as Galactic Civilizations III and Sins of a Solar Empire to bring strategic combat that's more macro than micro. In Ashes of the Singularity, resource-gathering has been simplified to allow the player to do what's really important: Manage thousands of troops to out-flank and out-think the enemy.

In order to create such epic battles, Stardock turned to developer Oxide Games to create the Nitrous game engine, which takes advantage of the latest drivers from Microsoft and AMD. Current strategy games often use less than half of the available processing power in a given computer, which has limited popular RTS games, such as StarCraft 2, to population caps of just 200.

Representatives from both Stardock and Oxide promised that despite the mind-boggling unit counts and gorgeous graphics, even today's mid-range PCs would be able to run Ashes of the Singularity at decent settings. The early build of the game we saw at GDC 2015 ran at a stable 30 fps, on a massive 4K TV at high settings, with an estimated 5,500 units on screen. But Ashes is more than just about big numbers.

Ashes also features a stunning lighting system which constantly changes based on its surroundings, so you can see reflections of light from each individual laser beam, even when there are thousands of shots going off at the same time. The game will also have a line-of-sight feature -- players won't be able to see behind a mountain, unlike older games that use simple sight lines made up of static areas around a unit. Clever players will be able to use the terrain to set up ambushes, popping out to attack from an enemy's blind spot.

Units are incredibly detailed, and when playing, you can zoom in to see the individual cannons and turrets on each tank, with even medium-sized units often having six or more discrete weapon systems.

While I would have liked to see additional features during the demo, such as the user interface and individual units' special abilities, what I did see of Ashes of the Singularity looked sharp and exciting. I can't wait for the official release, which should be in late 2015 or early 2016.