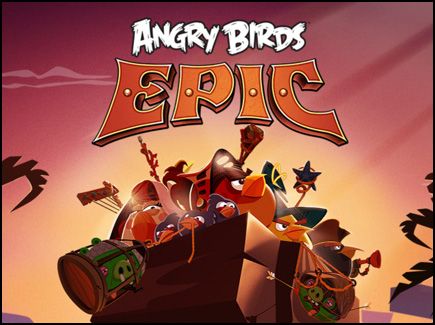 'Angry Birds Epic' brings role playing to the furious fowls' line of games, but too many ads and in-game purchases spoil the experience.

The height of the "Angry Birds" craze may have passed, but that hasn't stopped Rovio from making yet more iterations of everyone's favorite furious fowl. Rovio first deviated from its history of physics-based puzzle games with kart racer "Angry Birds Go!" Now Rovio has taken on the role-playing genre with "Angry Birds Epic" (available for free with in-app purchases on iOS, Android, and Windows Phone).

While the cute art, bubbly music and distinctive effects still convey the signature "Angry Birds" fun personality, we couldn't get over the numerous intrusions that take you out of the game. Too many ads and in-app purchases spoil what would have otherwise been a rewarding experience.

We join Rovio's band of amicable avians as once again they try to rescue their eggs from the clutches of evil pigs. The perfidious porkers have scattered eggs across Piggy Island, and it's up to you to help the birds with their quest. The birds are captained by series mainstay Red as he instructs players on the basics of turn-based combat in their fight against an army of sinister swine.

Along the way, familiar faces (beaks?) join your party, such as Chuck the mage, Matilda the cleric and more. Players command the birds through more than 30 different stages, multiple continents and hundreds of battles. After recovering four eggs, players will determine the fate of Piggy Island by confronting King Pig, Prince Porky and Wiz Pig.

Every time a party member lands an attack or is hit by the enemy, the chili rage meter at the bottom of the screen slowly fills up. When the meter is full, players can drag the chili onto an allied party member to unleash a unique special move.

These moves must be used judiciously to successfully defeat the horde of evil piggies. Battles end when one side's hit points are reduced to zero.

Players are rewarded using the familiar three-star system, with points accrued based on the health of your team and the damage done to enemies at the end of battle. Stars are then used to determine the number of chances you have to win loot from the bonus wheel.

As players progress through the game, battles become longer, with more and more waves of enemies. Enemies' tactics will also vary, and it is important to hold your finger over new enemies to learn about their individual attack styles and abilities.

In "Angry Birds Epic," combat is enhanced with new equipment. You can buy armor and weapons with Snoutlings, craft them in forges or win them by waging your Lucky Coins in the Gambling Pig slot machine. Spending coins to gamble can give you a chance to earn equipment upgrades, but players risk getting duplicates or low-quality items. Upgrading equipment allows players to increase attack-and-hit points as they make their increasingly difficult way through the pig army.

Combat is simple and straightforward. We never felt like we had to fight battles purely for experience. "Angry Birds Epic" is simple enough for children to understand, yet not so simple as to bore adults. This creates a steady but not-too-steep leveling curve — meaning you don't have to spend time backtracking in order to progress.

The main flaw occurs in certain fights, during which not having a specific team member in your party will create an unwinnable situation, forcing you to replay the battle. Thankfully, this does not happen often, and there is no penalty for dying besides wasted time.

As with all good RPGs, the world of "Angry Birds Epic" opens up later in the game with ship-based travel, allowing even more freedom for the player as he or she moves from island to island.

"Angry Birds Epic" abounds with bright colors and clean illustrations, which are used to animate the birds as they journey across Piggy Island to rescue their eggs. The world map is huge and detailed, and players will make their way across numerous themed zones, including jungles and deserts. Both the world map and battle screen look great, and the well-crafted visuals are a highlight of the game.

The music of "Angry Birds Epic" is upbeat and cheerful, recreating the playfulness that has become a trademark of the series. Sound effects are rich and distinctive, such as the earnest battle cries of the birds and the pitiful moans of the pigs as they are beaten back by the superior avian army. Each bird has individual sounds — a development that helps to give the birds more personality than they had in previous games.

The real issue with "Angry Birds Epic" is its preponderance of in-app purchases. There are three separate in-game currencies, each for different purposes.

Snoutlings are used for purchasing new gear and blueprints, and are sometimes found as loot from enemies. Essences of Friendship are used to reroll results from gambling, loot wheels and crafting, and can be earned through Facebook Connect. Once a day, you can visit your friends' bases to nab a free Essence of Friendship.

All of these currencies are available for purchase — something the game is not hesitant to point out. But the use of three different currencies in this game seems superfluous, especially because Lucky Coins purchased for real money can also be used to purchase both Snoutlings and Essences of Friendship.

Prices for Lucky Coins start at $0.99 for 15 coins and run all the way up to a staggering $89.99 for 3,000 coins. It takes three coins for one "cheap roll" of the Golden Pig gambling machine, with a "expensive roll" costing 20 coins for a high chance of strong and epic set items.

Lucky Coins can also be used to purchase the other currencies, with a minimum exchange rate of 20 coins for 250 Snoutlings and 50 coins for 10 Lesser Essence of Friendship. Equipment from the Golden Pig machine is not always better than gear you find through battling, but it is dangerously easy to get caught up in the potential pay-to-win cycle of buying gear through gambling.

On top of that, players are often prompted to watch unrelated ads in exchange for in-game currencies, which is in addition to the ads seen between the sluggish loading screens. It's hard to fault a free app for having ads, but the frequency with which players are bombarded by them is overbearing, and more intrusive than what is seen in other "Angry Birds" games.

The final straw is that due to the many ads and the required connection to the in-game store, "Angry Birds Epic" must be constantly connected to the Internet. You won't be able to play the game in subways, airplanes or other low-service areas.

Other features include the ability to sync accounts across devices by using a Rovio account, achievements and leaderboards through Google+ and connecting with friends through Facebook.

Rovio has provided a refreshing twist on the traditional "Angry Birds" experience for both new players and old fans who are looking for a change of pace. Gameplay is simple and has room for growth as your birds gain levels and combat the evil pigs, but the experience is dampened by the amount of ads, in-game currencies and connection requirements.

That said, "Angry Birds Epic" is a decent mobile game to occupy your time while you wait for the "Transformers"-themed "Angry Birds" game. Here's hoping that Rovio can build on the foundation set by this epic adventure.