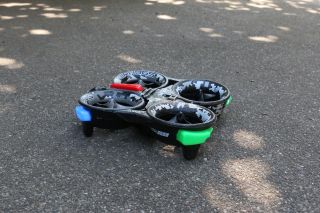 Calamarian forces were mounting an attack, menacing civilians and terrorizing the city. So I steered my space ship toward the trouble spot, deployed a commando to neutralize the alien attackers, while a fireman in my crew doused the burning buildings and an engineer airlifted panicked citizens to safety. And all of this action unfolded right in front of me on the floor of my office.

The attack wasn't real, of course — just an augmented reality overlay appearing on the display of my iPhone SE. But the ship at my command was very real — the Air Hogs Mission Drone. The $149 lightweight quadcopter is coming to a store near you this fall, virtual aliens included.

Made by Spin Master, the Mission Drone will take flight as part of the company's Air Hogs Connect augmented-reality platform, which vice president of production Nicholas Beliaeff describes as an effort to combine physical and digital play.

"AR bridges that gap in a way that's authentic to kids," Beliaeff told me, as a Mission Drone buzzed around us, kicking Calamarian butt and taking Calamarian names.

And that figures to be the Mission Drone's primary appeal. It gives kids a physical toy that they can control and master, all while they pilot it across a virtual world that pops up on their phone or tablet.

For a world-building toy that includes a remote controlled flying object, the Mission Drone is remarkably easy to set up. Just unfold the 39 x 19.5-inch mat that accompanies the quadcopter on a floor or bed — that's where the virtual world spawns, with the help of an app that runs on an Android or iOS device. Fire up the app, pair the drone with your device and follow the helpful on-screen prompts for lining up your device's camera with the mat and drone. Before you know it, a city under siege will spring up on your phone's display.

Piloting the drone is just as simple. A launcher button tells the Mission Drone to take off or land, and you can drag your finger in any direction to move the drone to a trouble spot. The only other on-screen buttons let you deploy the commando, engineer and firefighter who make up your flight crew.

You'll need some room to ensure a smooth flight, with a 4 x 6-foot space being ideal. I got the chance to play around with a prototype of the Mission Drone and a beta build of the app and enjoyed my best success at flight when I was free to circle around the mat, since the Mission Drone needs to be in sight of your mobile device's camera to maintain control. In my crowded office, which is littered with boxes and furniture, circling around the mat proved difficult, and my drone would suffer because of it, even getting stuck on some packing tape when it collided with a box off to the side of the mat.

I had better luck when I moved the mat to my bedroom, laying it on my bed. That's not coincidental — Beliaeff noted that the mat fits easily onto a twin bed, which, in a kid's bedroom, should provide ample play area.

Even if you do lose control of the drone — and in my initial test flights that happened more than I care to admit — you don't need to worry about the drone inflicting damage on the rest of your home. That's good since the Mission Drone is designed for indoor play only. The drone is made out of injected foam and the four blades are completely encircled by a protective frame. When my drone careened out of control, it would bump into a wall or lamp and fall harmlessly to the ground. (Still, I wouldn't advise battling the Calamarian invaders with a priceless vase nearby.)

Objects in the Air Hogs Connect virtual world don't fare as well. When you steer your drone into a virtual building, you knock it over, which actually adds some fun mayhem to the game. At least your virtual spaceship is indestructible, which is good news for novice pilots like me.

More problematic is the drone's battery life. The start-stop nature of the game with multiple landings and takeoffs means you get about 10 to 15 minutes of play time — an accurate estimate based on my time with the Mission Drone. Adult tech writers may have the patience to wait as the drone recharges with the included USB cable — I mean, in theory, they may be patient — but some kids might grow frustrated cutting short a mission to juice up their spacecraft.

At least there will be plenty for those kids to explore with their Mission Drone. The app offers a training mode in addition to game play. The game itself has 30 scripted missions and 40 objects to earn and unlock. Beliaeff says it took testes a full week to unlock everything, so there's little chance of kids getting bored after just a few flights. If they complete the game, there's a free flight mode as well.

Beyond that, there are a number of clever design touches that are sure to spark kids' imagination. Walk closer to the drone when it's in flight, and the virtual world becomes more detailed on your device's screen. The drone also turns automatically so that its green LED lights are always facing you, even as you move around the mat.

There's a lot to like about what Spin Master is doing with this hybrid toy drone, and we look forward to seeing the finished version this fall. Perhaps by then, I'll have developed the kind of piloting skills that will make the Calamarians quake in their exoskeletons.