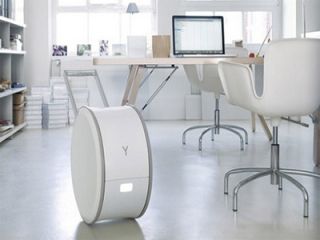 Dubbed the 'Yill', this innovative concept utilizes an internal dynamo to generate electricity as it is being rolled around on the floor, allowing users to transport and generate their electricity wherever they go. When this handy gadget is plugged into a wall socket, it is capable of holding up to 300 watts of transportable energy after being charged for only four hours. The Yill is capable of powering a small workstation for approximately 3 days on a full charge.

It would be great to see a version of the Yill utilizing more eco-friendly methods of harnessing energy such as solar or wind energy, but the Yill is still a great idea that is surely more appealing than traditional electricity generators. It was designed more for small business but the Yill can have its perks for personal use as well. Whether you need some electricity on the go or some portable emergency backup power, the Yill is the perfect solution!