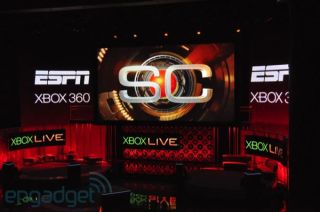 As we reported earlier, there are a number of games expected to be available at launch (in November). Among them is a racing game, Kinect Joy Ride, which Microsoft says is going to "revolutionize the kart racing genre." Engadget reports that controls for the game include turning a virtual steering wheel with your hands, twisting your for body spins, and pushing your arms forward for a boost.

Another game USA Today named was Kinectimals. As far as we can tell, the game involves training a tiger, lion or other type of cub. The kid on stage at the demo went through a bunch of the activities and tickled the happy tiger cub. At one point she hid and he pressed his paws against the screen and whimpered until she came back.

Microsoft also showed off a range of Wii Sports-like games including boxing, bowling and soccer but some new ones like track and table tennis. Exactly what you'd expect but still, looks pretty fun.

Next up was a bunch of two player games involving rafting, mining carts and more. One nifty feature of these games is that they actually take random, silly photos of you when you're not paying attention.

Also demoed was Your Shape, an Ubisoft fitness game designed to get you moving even more. A full body scan displays a more accurate avatar and her body temperature. Your Shape allows you to do personal training with an on-screen trainer or 'fun gym activities.' There's also a 'Zen Energy Class,' which looks a lot like Yoga. The game tracks your skeleton and tells you exactly how much you need to shift about to execute the post correctly.

Next up is a dancing game from MTV and Harmonix. Described as "the Rock Band of dancing," Dance Central will feature tracks from MIA, No Doubt, Lady GaGa and some of the routines will be recognizable from the music videos. Dance Central includes a 'break it down' mode than teaches you the moves step-by-step, like a real dance class.

Next up was a demo for Forza, which shows the player walking up to the car and looking at it from a number of different angles and using gestures to zoom in on certain parts to get a better look. This is supposed to be the 'future of racing.'

Microsoft briefly showed a trailer from the Star Wars game we're all so excited about but gave no real details.

Secondary to the bevy of games Microsoft showed off, the company also showed a couple of other uses for Kinect. Video chat looked incredibly fun with Windows Live integration and no headset required. Engadget reports that there's also the ability to watch videos together online via a Bing tie-in, which is pretty neat.

The other notable feature of Kinect is a partnership with ESPN, which will bring over 3500 live and on-demand sporting events, mostly in HD. Soccer, MLB, NBA, college football, you name it, they've got it. There's also sports trivia at the bottom of the screen so you can answer questions between plays if that's your thing. The best part is that it's free for Xbox Live users.

Kinect is launching November 4th in the U.S and worldwide in time for the holidays. We'll update when we hear the price.