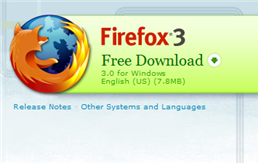 Looking back at the history of Firefox, it is immediately apparent how different the launch scenarios of version 1, 2 and 3 were. Firefox now holds almost 20% of the browser market and has established itself as a serious rival to Microsoft’s Internet Explorer. That was especially obvious when Mozilla’s download servers where overwhelmed by download requests Tuesday (there were more than 2.9 million downloads within the first 8 hours after launch) and we saw a flood of articles complaining that Mozilla’s servers were unreachable – a circumstance that was largely forgiven during the launches of version 1 and 2.

With Firefox 3, Mozilla takes the browser war to another level and can claim dramatic speed gains and feature optimizations. In fact, the browser turns out to be a well-balanced application, with just enough innovative features to enhance the user experience, and with many minor tweaks – some of which you will likely only notice after a few days of using the software. Personally I believe that Firefox 3 is to the browser world what a new Apple device is to the consumer electronics industry– a sleek, beautifully designed piece of software that connects with you personally, enabling you to concentrate on the task ahead, not on the software itself.

Next Page A Closer Look: Installation and Startup
21 Comments Comment from the forums