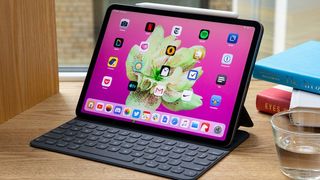 Apple could be planning some big changes for its 2020 line of iPads, according to a new report.

In a note to investors on Monday (Sept. 30), TF International Securities analyst Ming-Chi Kuo said that Apple is planning to adopt MiniLED display technology in iPads it could release as early as late-2020. The move would mean Apple would ditch LCD it’s currently using in favor of the MiniLED. Apple would also ditch the prospect of using OLED in the iPad’s screen in the process.

The move to a new screen technology could be tied to a broader effort by Apple to change the iPad’s design. MiniLED uses more LEDs than OLED, but the pixels are extremely small. That would provide Apple with more design leeway to build a thinner and lighter iPad without sacrificing image quality. Indeed, MiniLED screen quality is often just as good as OLED.

That said, Apple has relied on OLED in its iPhones to great effect. And while it’s possible that Kuo is right and Apple will move to MiniLED, we can’t discount the possibility of the company opting for OLED instead.

That said, Kuo said in the note, which was earlier obtained by Macrumors, that Apple might ditch OLED entirely. The analyst said that the company could opt for the same MiniLED technology in MacBooks starting in 2021 and eventually move to another technology, called microLED, for iPhones in a couple years.

Whatever the case, Apple is clearly working on screen technology and eyeing ways to boost the overall appeal of its devices. And it might ditch LCD and opt for MiniLED to do it.