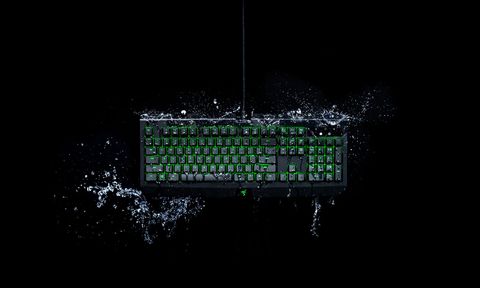 The Razer New BlackWidow Ultimate feels comfortable and performs well, and its water resistance is a potentially useful new feature.

The Razer BlackWidow is a very good keyboard. It has been for years. Razer has justifiably prided itself on designing a stylish, functional peripheral with high-quality mechanical switches and smooth software. The only downside — if you can call it that — is that not much about this keyboard has changed in the past half-decade.

Enter the New Razer BlackWidow Ultimate ($110). All of the BlackWidow's usual strengths are there (the mechanical keys, the software), as well as the usual weaknesses (no discrete media keys, no wrist rest).

The only big difference is that this year's model is rated up to IP54 on water resistance. You could conceivably spill a bottle of water on this keyboard (accidentally, we'd hope), and it'll keep on ticking. If that's a huge concern — well, first of all, you should probably find another place to store your drinks — this keyboard could save you some trouble. However, that may not be enough to lure you away from a more colorful keyboard, or one with subtler key switches.

The BlackWidow Ultimate earns points right off the bat for not wasting any space. There's no extra row of keys; there's no huge plastic border surrounding the peripheral. It's just a standard, full-size keyboard with a tiny Razer logo at the bottom to differentiate the peripheral from copycats. When it's lit up, it has a pleasant green color scheme. Admittedly, this is not the most common hue for a gaming setup, but I will take it over the endless parade of black-and-red models from other manufacturers.

The top row of keys also controls media and macros, provided you reach all the way down the keyboard to use the Fn buttons in conjunction with the top row. To my mind, this has always been one of the weaker aspects of the BlackWidow, because it's an inconvenient way of performing some very common functions. Similarly priced keyboards, like the Logitech G610, offer discrete media buttons, and they make a big difference. (However, props to Razer for being one of the few companies that still offers on-the-fly macro recording; it's incredibly helpful for MMOs.)

Unlike other Razer keyboards, which offer three types of key switches, the BlackWidow Ultimate comes only in Razer's tactile, clackety Green switch. (The Orange and Yellow, which are offered on other Razer models, are both much quieter; the Orange is tactile, while the Yellow is linear.) Perhaps Razer plans to gauge fan response to the Green switches and offer other options down the line, but it's disappointing that there's only one choice at present.

As for the Razer switches themselves, I've gone back and forth on them over the years. The Greens, in particular, always feel a bit stiff, although they're still miles ahead of both standard membrane keyboards and cheaper mechanical switches like Kailh or Gretech. When I first reviewed them, I loved them; then, they wore on me. Now, I'm perfectly happy to use them, although I prefer switches with a softer touch, like Cherries or Logitech's Romer-Gs. If you can try a keyboard with Razer Greens before you buy one, I always recommend doing so.

The comparative stiffness of the Ultimate's keys affected the way I type. On my regular keyboard, a Logitech G810, TypingTest.com rated me at 118 words per minute with no errors. On the BlackWidow Ultimate, I scored 108 words per minute with six errors. It's not catastrophic, but it's a noticeable difference.

The BlackWidow Ultimate runs on the Razer Synapse software — although if you have some of Razer's newer mice, you should be aware that the Ultimate runs on the older Synapse 2.0, rather than the Synapse 3.0, which is currently in beta. This situation was extremely confusing; it's unintuitive, to say the least, when a company's latest-and-greatest keyboard runs on an older software version.

Quibbles aside, the software does what it's supposed to do. You can record macros, assign them to keys, link profiles with games and even toy around with some lighting options. Everything will be some degree of green, sure, but but you can make the keyboard twinkle like a starry night or ripple waves of light as you type. Synapse 2.0 is starting to show its age, but you probably won't need it for that many things, anyway.

The keys were fast, responsive and accurate, whether I was grappling from platform to platform as Widowmaker in Overwatch or queuing more terran marines in StarCraft: Remastered.

The biggest innovation in this year's BlackWidow Ultimate model is its IP54 water resistance. Razer informed me that this means the keyboard can stand up to a spilled bottle of water or soda. I elected to test its claim with the former, since the latter would probably get sticky and require removing a lot of key caps to clean.

After dumping the better part of a bottle of water on both sides of the keyboard, I didn't notice any change in the BlackWidow Ultimate's performance. The key caps themselves seem somewhat hydrophobic and did a good job of repelling a lot of the moisture before it worked its way down into the key caps. In fact, after I gave the keyboard a good wipe with some paper towels, the whole apparatus dried off within the 15 minutes it took us to upload the video of our exploits.

Membrane keyboards are fairly water-resistant by design, but to see the same thing in a mechanical keyboard is uncommon. I'm not sure if there's really an epidemic of gamers spilling stuff on their expensive keyboards — I hope there isn't — but if you want peace of mind that your $1 can of Coke will not destroy your $110 keyboard, the New BlackWidow Ultimate can offer you that.

MORE: 10 Cheap Keyboards (Under $20) Ranked from Best to Worst

I tested the New BlackWidow Ultimate with a variety of single- and multiplayer titles to see how well it stood up under regular gaming conditions. It performed extremely well — just as most Razer products do. The keys were fast, responsive and accurate, whether I was grappling from platform to platform as Widowmaker in Overwatch or queuing more Terran marines in StarCraft: Remastered.

I tried the keyboard with Middle-earth: Shadow of War and SpellForce III to see how the Razer handled more-traditional single-player adventures, and I observed similar results. The New BlackWidow Ultimate simply works well; that's not very exciting, perhaps, but unpredictability is the last thing you want when you're in the middle of a life-or-death gaming moment.

The BlackWidow Ultimate doesn't break much new ground, and it retains a few not-so-helpful drawbacks that Razer stubbornly refuses to address. Those faults don't do much to detract from what is still — and, really, always has been — an excellent keyboard. The water resistance works as advertised, and the software, while quickly becoming outdated, is functional.

If you're looking at mono-color mechanical keyboards in this price range, it's also worth considering the Logitech G610 and the Corsair Strafe, which use authentic Cherry MX keys. On the other hand, those models could fall victim to an errant bottle of water, so choose wisely.